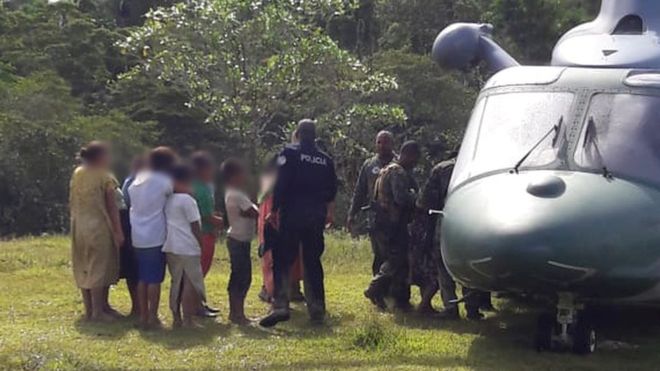 A police officer approaches the suspects in the Ngäbe-Buglé region

The bodies of seven people have been found in a mass grave in an indigenous area of Panama controlled by a religious sect.

The deceased include a pregnant woman and five of her children.

Authorities believe that a religious sect performed an exorcism on the victims in the Ngäbe-Buglé region in the north-west of Panama. A further 15 were freed from alleged captivity.

Ten people have been arrested on suspicion of murder.

Prosecutors announced on Thursday that they were investigating the case.

Senior prosecutor Rafael Baloyes said the grave was discovered after locals alerted authorities last weekend about several families being held against their will by an indigenous-run church.

The area the bodies were found is a remote area about 250km (155 miles) from Panama City. It is controlled by a religious sect called the New Light of God.

Mr Baloyes said: “They were performing a ritual inside the structure. In that ritual, there were people being held against their will, being mistreated. All of these rites were aimed at killing them if they did not repent their sins.”

The suspects, which include a minor, are expected to appear in court on Friday or Saturday.

A source close to the investigation told AFP news agency that one of those arrested is the father of the pregnant woman found in the grave.

Exorcism is a religious or spiritual ritual carried out to supposedly cure people of demonic possession. It remains controversial, in part due to its depiction in popular culture and horror films.

In an article about exorcism for The Conversation, Helen Hall, a lecturer at Nottingham Law School, said the practice “signifies freeing a place, person or even object from some form of negative spiritual influence”.

Beliefs and rituals of a similar description “are found in almost all cultures and faith traditions”, Ms Hall, also an Anglican priest, wrote.

Exorcism, meaning “oath” in Greek, is still widely practised today, most frequently in Christian and Islamic settings. It has “proved to be a dark yet enduring feature of Catholic culture”, Francis Young wrote in A History of Exorcism in Catholic Christianity.

In 2018, around 250 priests from 50 countries attended the Vatican’s annual exorcism course due to increasing demand among some of the world’s Catholic communities.

In the Catholic Church, exorcisms are performed by trained priests who recite prayers and excerpts from the Bible intended to drive out demonic entities.

As Catholic Online explained, the person who is possessed may be bound as the priest traces the sign of the cross over them and sprinkles them with holy water.