Pay arrears or face our wrath – Trainee nurses to Govt 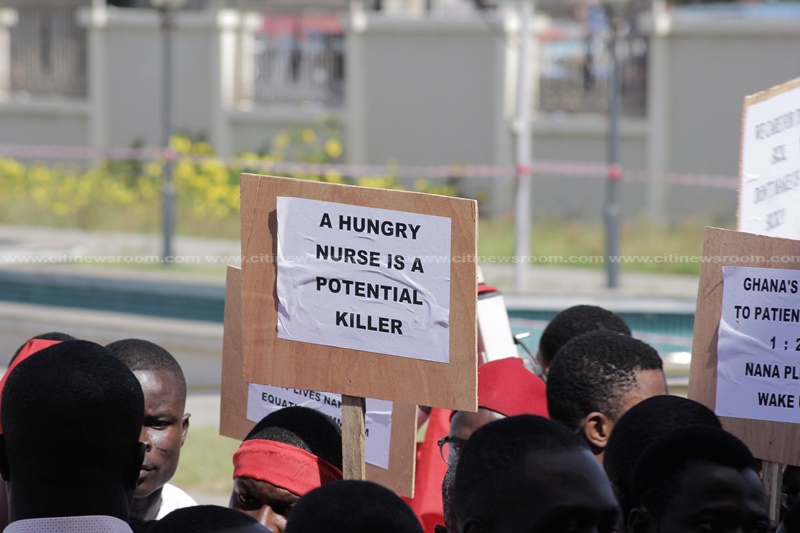 Trainee Nurses and Midwives across the country are appealing to the government to pay them four months of their allowances or incur their wrath.

Speaking to Citi News, the National Financial Secretary of the Ghana Trainee Nurses and Midwife Association (GNMTA), Abanga Abambila Agoswin, said the situation is taking a dire toll on trainees.

He warned that trainees will advise themselves should government fail to settle all arrears immediately.

“For four (4) months now starting from September 2019 till now no trainee nurse has received his or her allowance, we trainee nurses are actually disappointed over the distorted payment of our allowances. Last year (2019) when the payment was effected some trainees did not receive a penny the whole year and from September 2019 till now almost all nurses’ trainees have not received our allowance.

We are disappointed in the government over the failure to pay trainee nurses allowances as promised; it is affecting our studies in the sense that, no principal of our colleges will allow us to attend lectures without full payment of our fees because they think we are always paid our allowances”.

Mr Abanga also indicated that trainees will accordingly advise themselves if the government does not immediately settle all arrears owed them.

“Government should pay our allowance in full and those who were affected should also be paid starting from January 2019 and we must express our disappointed in the government over this, you know we are in 2020 and there is no course for alarm we know what to do, we shall advise ourselves accordingly”.

The President of the Republic, Nana Addo Dankwa Akufo-Addo in September 2017 restored the nursing allowances of health trainees, comprising nurses and midwives.

He indicated that each trainee would be paid their allowance of four hundred Ghana cedis (GH¢400.00) per person, for each of the ten months of the academic year.

The President was speaking at the Sunyani Nursing and Midwifery Training College on Tuesday, 10th September, at a ceremony to mark the restoration of the nursing and midwifery training allowances.

Nurses in the Upper East Region warned that the status of allowances would influence their vote in the 2016 December polls.

But government insisted the decision allowed it to expand various health and educational infrastructure in the country as well as remove the restrictions on admission to the various training institutions.

Former President John Mahama in November 2019 challenged President Akufo-Addo to fulfil his campaign promise of paying all the allowances of trainee teachers and nurses.

His action was triggered by the agitation of some trainees for their accumulated allowances to be paid.

Mr. Mahama said his administration had a plan to systematically migrate the trainees onto the student loan scheme in order to create room for an increased enrollment.

Nutrition resolutions for the year 2020