Sammi Wiafe writes: Africa, the ‘darling boy’ of the West and Asia; another scramble for the continent?

The UK Government is billed to leave the European Union (EU) officially on the 31st of January, 2020. After the referendum to leave in 2016, the leadership of Boris Johnson is leading the crusade to finally get out of a Union they have been part of for years.

The Brexit move has caused two Prime Ministers their job, David Cameron and Theresa May.  With the UK leaving the EU, it will need new partners and new investments: Europe is choked and the Americans and Asians are not options for the UK.  Last week, the Boris Johnson led government invited some 21 African leaders and representatives to the UK for the UK-Africa Investment Summit with the theme ‘Partners for prosperity.’

The Summit brought together businesses, governments and international institutions to showcase and promote the breadth and quality of investment opportunities across Africa.

The Summit was also aimed at strengthening the UK’s partnership with African nations to build a secure and prosperous future for all its citizens. It sought to mobilise new and substantial investment to create jobs and boost mutual prosperity.

Statistics available indicates that by 2050, over 2 billion people will live in Africa and 1 in 4 global consumers will be African. Much of Africa’s population boom will come from Nigeria, currently the world’s 7th most populous country. By 2050, the report predicts, Nigeria will become the world’s third-largest country by population, becoming one of the six nations projected to have a population of over 300 million. So it will be right for the UK government to look at Africa as a ‘partner’ for prosperity.

According to the UK Department for International Development, it is the leading investor in Africa. In 2018 alone, the UK’s development finance institution, Commonwealth Development Corporation (CDC) made investments supporting over 370,000 jobs across Africa.  Since 2002, the UK’s Private Infrastructure Development Group has invested over £1.95bn in 146 infrastructure projects across Africa. The stock of UK investment in Africa is worth 39 billion pounds as of 2018.

But the UK is not the only country looking at the direction of Africa, the new market – other world powers are doing the same.

Beijing Summit of the Forum On China-Africa Cooperation (FOCAC)

In 2018, Chinese President Xi Jinping ‘summoned’ all 53 African leaders to Beijing for the Beijing Summit of the Forum on China-Africa Cooperation (FOCAC) held at the Great Hall of the People in Beijing, capital of China. At the end of the three-day summit, the Beijing Declaration was adopted. 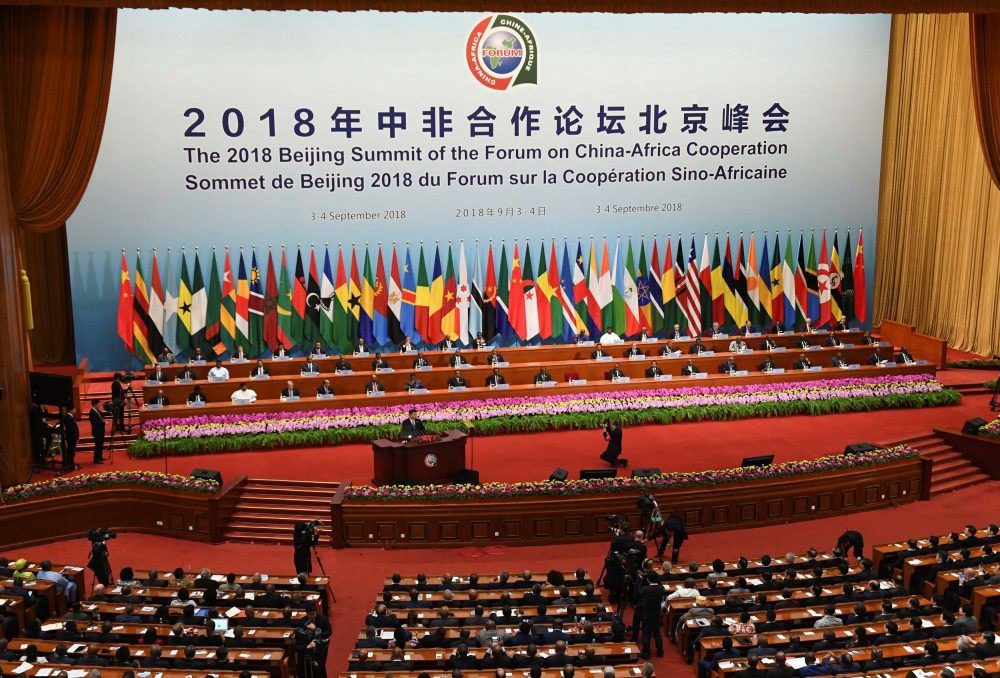 African countries make up less than 4 per cent of China’s global trade and less than 3 per cent of China’s global foreign direct investment (FDI) flows and stocks. Similarly, China only accounted for around 5% of global FDI into Africa in 2015. Africa is much more dependent on China for the trade than for FDI. In contrast, roughly 25 per cent of Africa’s global trade in 2015 was with China. The relatively low share of Chinese FDI in Africa, revealed by the aggregate statistics, is consistent with work showing that a significant proportion of planned Chinese investments registered with the Ministry of Commerce have not been implemented (Brautigam and Xia 2017).

Currently, Chinese investments and contracts in sub-Saharan Africa total 299 billion dollars from 2005 to 2018, according to the China Investment Global Tracker, and in 2018, Chinese President Xi Jinping vowed to invest a further 60 billion dollars into African nations. Chinese goods are found in every part of Africa, in Ghana, they can be found everywhere. Enter the big mall, the small retail shops, the electrical shops and you will find a Chinese product. From phones, TV sets, home theatres and the rest. These goods have gained the notoriety of not lasting long or considered to be fake.

Chinese people are also found in every country in Africa. The story is even told of how the Zambian government has employed Chinese as Police Officers or Law Enforcement Officers.  In Ghana, the Chinese are heavily involved in illegal mining popularly called ‘galamsey’ which destroys the environment and water bodies. Not a single day passes without a news report on the activities of Chinese ‘Galamseyers’.

They are arrested and a few days later their compatriots will be seen again on TV and in newspapers committing the same offence.  It’s very disheartening, to say the least, but when you have a superpower like China spearheading many of the development projects in your country, it appears for a country like Ghana so hungry for infrastructure, there is little authorities can do? 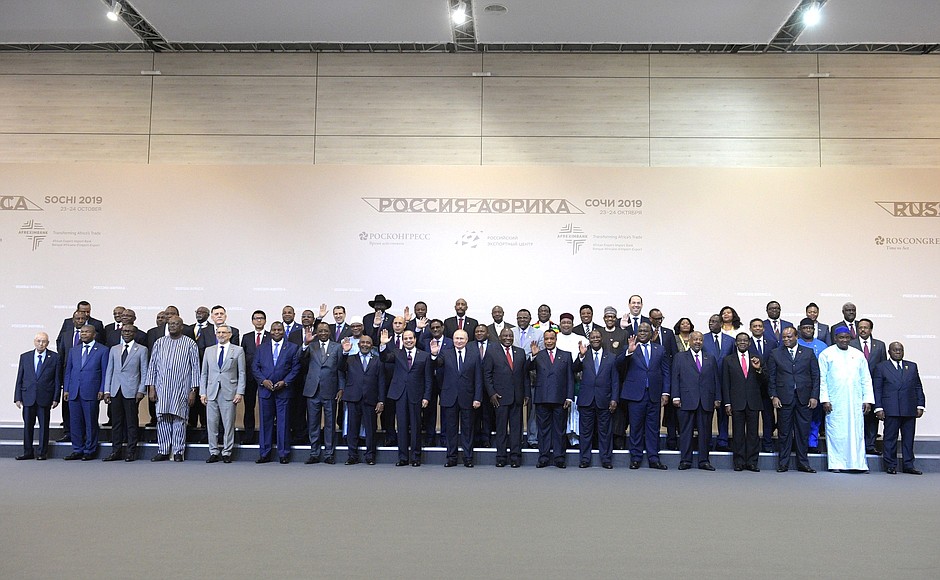 Russia is not a known friend of or to Africa. The only time the Soviet Union used to have a major presence on the continent was before the Cold War but right after the War, their presence in Africa diminished.

President Putin at the start of the summit said ‘’we do not impose our views, respecting the principle of African solutions to African problems proposed by the Africans themselves’’.  According to a BBC report, 12 African leaders have visited Moscow since 2015 – six of them in 2018 alone. Russia’s Defense relationship with Africa is growing and since 2014, military co-operation agreements have been signed with 19 African countries.

Between 2017 and 2018, Russia had weapons deals with Angola, Nigeria, Sudan, Mali, Burkina Faso and Equatorial Guinea. These included fighter jets, combat and transport helicopters, anti-tank missiles and engines for fighter planes. Russia has its eyes on Africa for its minerals, Moscow has a shortage of some minerals such as manganese, bauxite and chromium, all of which are important for its industries. Russia still has more to do in terms of trade with Africa. Because it does more trade with Europe and Asia than with Africa.

And sub-Saharan Africa’s most important trading relationships in 2017 were with India, China and the US – not Russia. Also, the US, China, Japan and the EU give far more development aid and invest more in Africa than Russia does. So the October summit of 2019 was an avenue for Russia to announce its presence in Africa. Russia’s current bilateral trade with Africa is just 20 billion dollars which is a tenth of China’s investment in the same continent.

The promises of cooperation were made at the seventh Tokyo International Conference for African Development (TICAD). It is one of several such gatherings that now occur across the globe, where countries make their vows to Africa and court African partners for aid, trade, investment. China’s deepening presence in Africa, however, looms large over them all and so it was at TICAD.  According to Quartz Africa, last year, carmaker Toyota invested 2 million dollars in Kenyan logistics firm Sendy while Sumitomo Corporation invested in the Nairobi-headquartered pay-as-you-go solar firm M-Kopa. Japanese insurance firm Sompo Holdings financed payment platform BitPesa. Also, Nigerian motorcycle app Max raised 7 million dollars from Japanese motorcycle manufacturer Yamaha. In late August of that year, automaker Mitsubishi also announced 50 million dollars to enable the Africa-focused off-grid solar firm BBOXX to expand into Asia.

According to the US-based Washington Post, to some extent, Japan is hoping to exploit a growing sense in Africa that putting all of one’s eggs in Beijing’s basket is not entirely wise.  Rather than competing directly, it has tried to differentiate itself from China by stressing the quality of the infrastructure it can build in Africa.  As concerns rise about Chinese state-to-state lending pushing African countries further into debt, Japan has stressed financial sustainability and private-sector partnerships that don’t raise government borrowing.

Where China brings its own workers across to build infrastructure, Japan says it employs locals and transfers technology to Africa, just as it has done across Asia.

That’s the theory. The problem in practice is that poor countries with huge infrastructure deficits often do not feel they can afford to pay for quality, while Japanese corporations are not exactly bursting with enthusiasm for Africa, officials admit.

In February 2019, Ghana had the rare opportunity to host the third German-African Business Summit (GABS).

A platform for Small and Medium Scale Enterprises in Africa and Germany to explore business opportunities.

The GABS is Germany’s signature business event in Africa, where top business and government leaders from Germany and Sub-Saharan Africa meet every two years to discuss and promote economic relations between Europe’s largest economy and the fastest-growing region in the world. More than 350 German and African companies, 16 German ambassadors from some African countries as well as government representatives from Ghana, Equatorial Guinea, Benin, Liberia, Nigeria, Tanzania and Togo participated in the summit.

German investment is not loud like that of China. In 2015, the German government announced a 1 billion Euro investment fund for Africa aimed at creating jobs for its youth to cut down on migrants especially the youth from coming to Europe. This was during the Immigration Crisis in Europe.  Whilst Angela Merkel’s coalition government agreed Germany needed a development policy that would help stem the flow of people from African countries to Europe, her cabinet struggled to agree on what that policy might look like.

In 2017, the government began rolling out programs under its 1 billion Euro ($1.1 billion) Development Investment Fund for Africa, Germany’s development strategy for the continent is finally coming into focus — and it looks a lot like private sector growth. Most of the fund is dedicated to easing the entrance of German businesses into African markets or helping African businesses grow. How successful this project has been will be discussed another day.

Though some of the bilateral and multilateral arrangements look good and yielding some results, it is also important to know that the ‘benefactors’ gain more and will not be altruistic. It is always and will continue to be their interest first!

It does appear generally that Africa has become a pawn to the West, and Asia-a dumping site for their unwanted goods.

With the introduction of the Africa Continental Free Trade Agreement, AfCFTA it is expected that African countries will begin to trade among themselves to create the needed jobs for its teeming youth.  Our leaders must think of the next generation and not the next elections. We need leaders who will think outside the box and develop programmes and policies that will better the lives of their citizens.

Africa must develop for Africans.