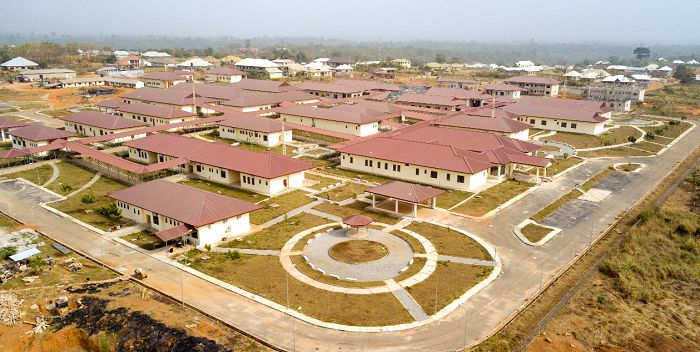 Two more hospital projects being built by the Euroget De-Invest Group are scheduled for completion and handing over by the close of June this year 2020.

The two district hospitals are among nine hospitals being constructed by the Egyptian investment company, Euroget De-Invest, across the country, two of which were inaugurated in Wa in the Upper West Region and Kwabenya in the Greater Accra Region last year.

The district hospitals at Nsawkaw in the Bono Region and Tepa in the Ashanti Region are currently at the furnishing and finishing stages to pave the way for their respective inauguration.

For both projects, engineers estimate remaining work to be 20 per cent, mainly comprising the installation of medical equipment and finishing works on the respective administration blocks and staff accommodation.

Other than that, the identical 60-bed facilities — each containing 24 different buildings — are complete in physical form, road layout, landscaping and electrical, water and sewerage systems.

Currently, China Railway No. 5 Engineering Company Ghana Limited is the subcontractor for both projects, holding 70 per cent workload at either site, while Venus Allikin Company Limited is sub-contracted for the remaining 30 per cent on both projects.

The Resident Engineer at the Tepa District Hospital, Mr Khaled Hamed, told the Daily Graphic at the site last Saturday that given the pace of work and related arrangements, Euroget De-Invest Group, would be able to hand over the facility by June 30 this year.

He said about 90 per cent of medical equipment imported for the facility had arrived and the subcontractors were going through the relevant procedures to clear them from the ports.

His counterpart at the Nsawkaw site, Mr Ahmed Elhamy, expressed similar sentiments and added that they were working to ensure a smooth delivery according to the time schedules.

The subcontractors stressed that the expected arrival of the imported equipment and fittings would advance the progress of work on both facilities.

At both sites, the unpainted structures of the administration blocks — fully roofed at Tepa, partially roofed at Nsawkaw — hardly give any sense of hope of work in progress, but those structures serve as virtual veils shielding the finished outer works on the other blocks of the main medical facilities.

There were 70 labour hands on-site at Nsawkaw and 73 at Tepa engaged in various installation works during Saturday’s visit.

When completed, the two hospitals will each have four operating theatres covering different specialities; a radiology department equipped with ultrasound, echocardiography, x-ray machines; a laboratory; a maintenance unit and central storage areas.