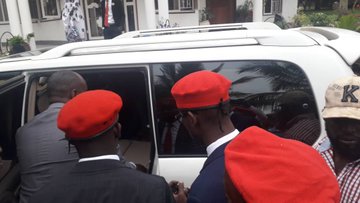 Police in Uganda have fired tear gas and prevented the musician and opposition MP, Bobi Wine, from holding a public meeting near the capital, Kampala.

He was due to outline his manifesto for next year’s election when he intends to run for president.

The MP, whose real name is Robert Kyagulanyi, was taken to a police station.

Police have repeatedly prevented him from holding rallies and performing any music shows.

President Yoweri Museveni, who came to power 33 years ago, is expected to run for another term.

President Museveni has long been intolerant of any opposition challenge and Bobi Wine is likely to face months of harassment.

A privately-owned newspaper has tweeted images of police action to disrupt the presidential aspirant’s meeting.