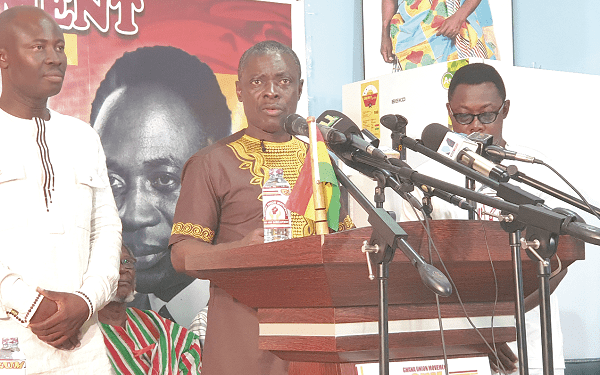 The presidential candidate for the Ghana Union Movement (GUM) Rev. Christian Kwabena Andrews, popularly known as Osofo Kyiri Abosom says his running mate in the upcoming general elections will be a God-fearing Muslim.

The Pastor, who is yet to select a running mate to contest with him in the presidential election has disclosed that he would prefer to contest with a Mallam by his side.

A Mallam is an honorific title given to Islamic scholars in Africa.

Osofo Kyiri Abosom told Umaru Sanda Amadu on the Point Blank segment on Eyewitness News that he has already  consulted the Chief Imam about the decision and will soon be given someone to run the race with him.

“My running mate will be a Muslim. I want a Muslim who also has a fear of God in him; a Mallam. I just want people who have the fear of God in them. I don’t know any Mallam but I have given it up to the Muslim community and the Chief Imam. I’ve visited him and told him that so they will get somebody for me,” he stated.

The Founder of the Ghana Union Movement, Osofo Kyiri Abosom, is also the founder and leader of the Life Assembly Worship Centre.

The aim of GUM is to address the challenges confronting the nation.

The party, though new in Ghana’s political front, has received massive endorsement across the length and breadth of the country.

Speaking in an interview, Osofo Kyiri Abosom said the ideology of the movement was to revisit the developmental agenda of Ghana’s first President, Dr. Kwame Nkrumah, which focused on massive industrialization across the country to propel national development.

He disclosed that the good works by the first president were abandoned both by the NDC and the NPP and believed his party would be the only government that would lead the nation to its promised land when voted for in the 2020 general elections.