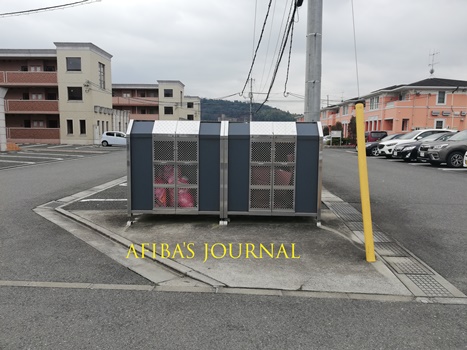 “Is this metallic green shelter a kennel, pen, kraal or a sty, please?”

“No madam, it is a rubbish house,” he replied.

“In Japan, animals live in the same home as their owners and should there be a make-shift shelter for the pet, it definitely will not be situated this openly,” Takara-san explained.

He continued, “These structures are special rooms for rubbish and all houses in Japan have them. Some are attached to the houses like that of the brick apartment we saw earlier but most are detached from the building like all these silvery ones here.”

“This is impressively astonishing!” I exclaimed.

I’m not privy to the indicators used in establishing the fact this year that, Japan is the third-best country to live in the world, although they came second in 2019 after Switzerland. However, I am certain that aside factors as:
1. Their higher life expectancy which is about 85 years on the average,
2. Their advancement in health which makes them record less than 2 deaths per every 1000 live births,
3. Their total literate population etc, and
4. Their enviable record of squeaky cleanliness must definitely dominate the indicators. 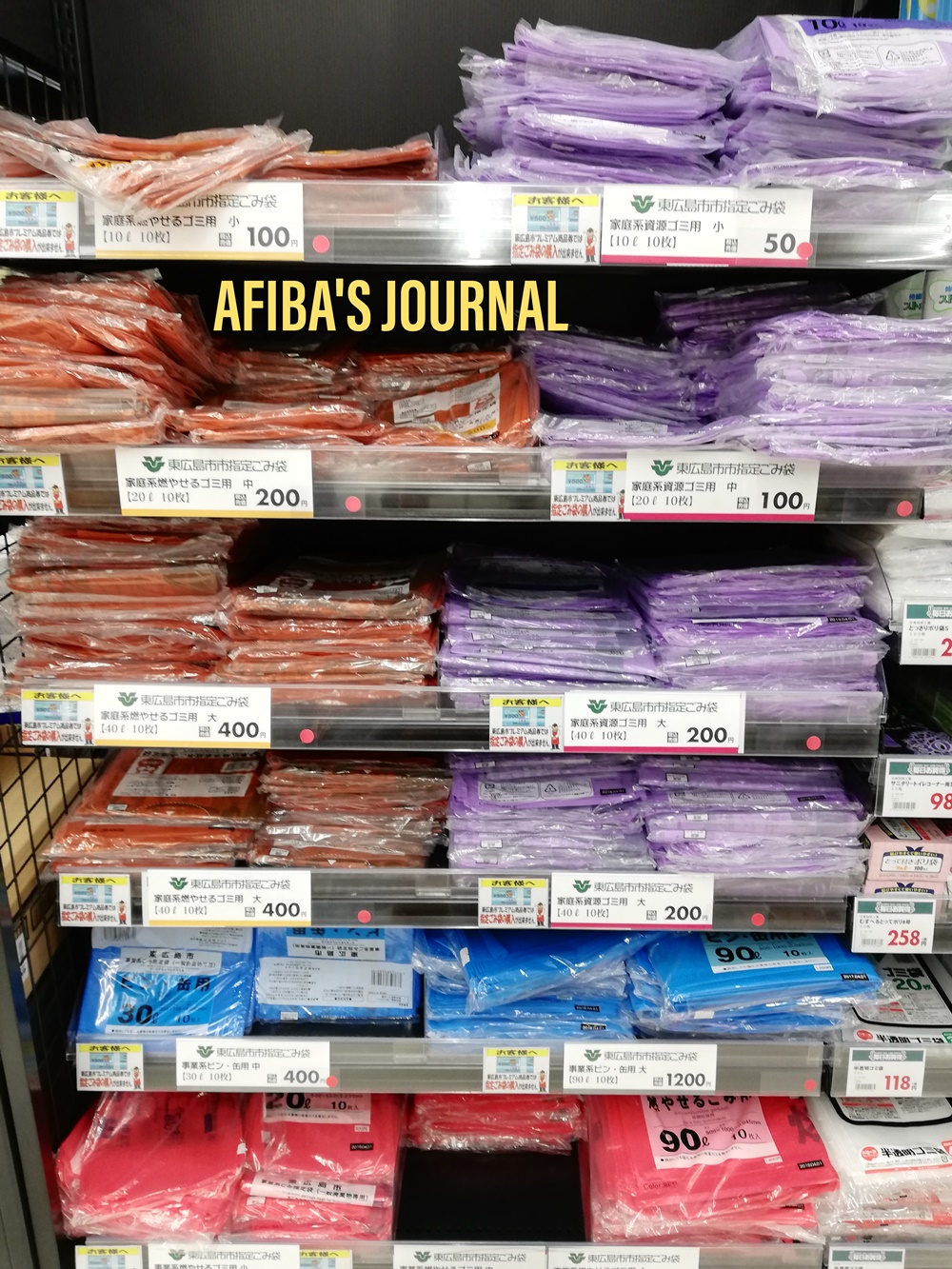 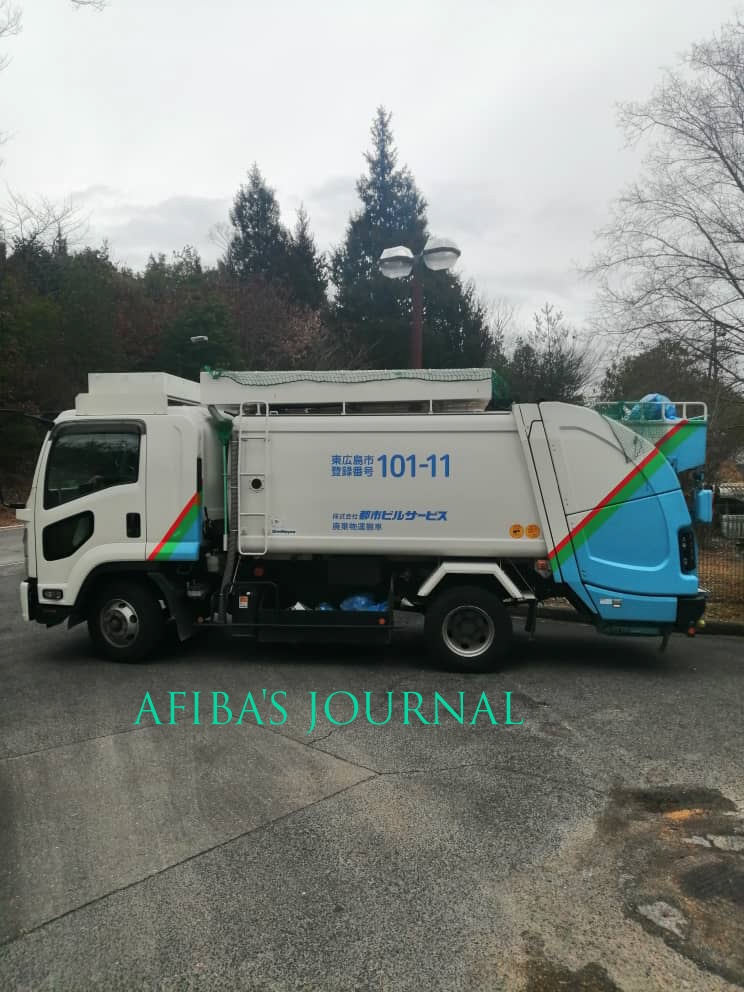 What a beautiful sight to behold, I said while going round to literally inspect the “rubbish houses”. As I entered this very one, the spotless floor and the spick-and-span manner the refuse had been left in the “rubbish house” was antiseptic enough for an advocate of dirt, should anyone like that exist.

How do they maintain such ‘absurdly’ clean state?

If it is definitely not a magic wand that the Emperor or the Prime Minister waves but a calculated effort which yields results, then may I write it here should my Ghanaian president per chance see my article and consider implementing same in my home country.

I call it the practical TRIGONOMETRY (I’m sure this term reminds you of your mathematics teacher if you were the student that suddenly develops belly ache when the school bell goes for a change lesson from P.E to Maths).

Conversely, this TRIGONOMETRY is not about the relationship between sides and angles of a triangle but the cycle of obedience of landlords, the power of the state and the commitment of law-abiding citizens.

In Japan, all houses or whatever shelters there is for human habitation have “rubbish rooms” attached or detached. Whether joined to the building or not, it must be owned and used by the tenants in that particular accommodation. This is the first part of the TRIGONOMETRY and it is carefully obeyed by all landlords and homeowners. I don’t know for a fact, but I assume that without that facility, no human will agree to live in your house even if it were that luxurious. Shall my Ghanaian landlords obey this jealously and provide these special “borla rooms” for every apartment they put up? I still recall how it was decreed that every home in Ghana should have a toilet, yet …. 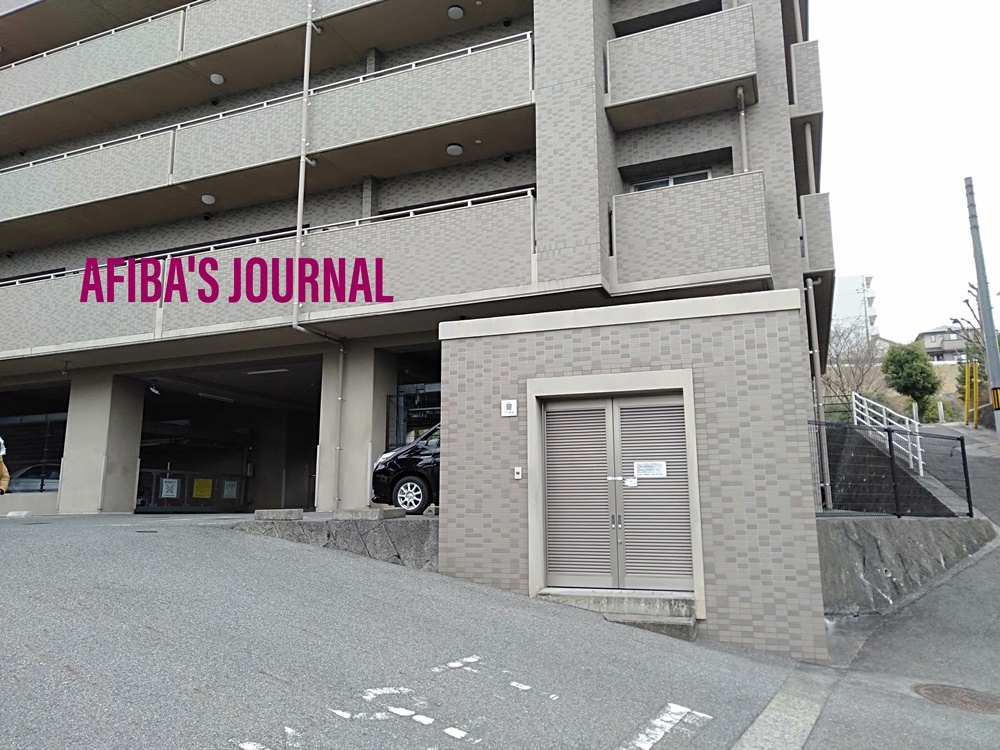 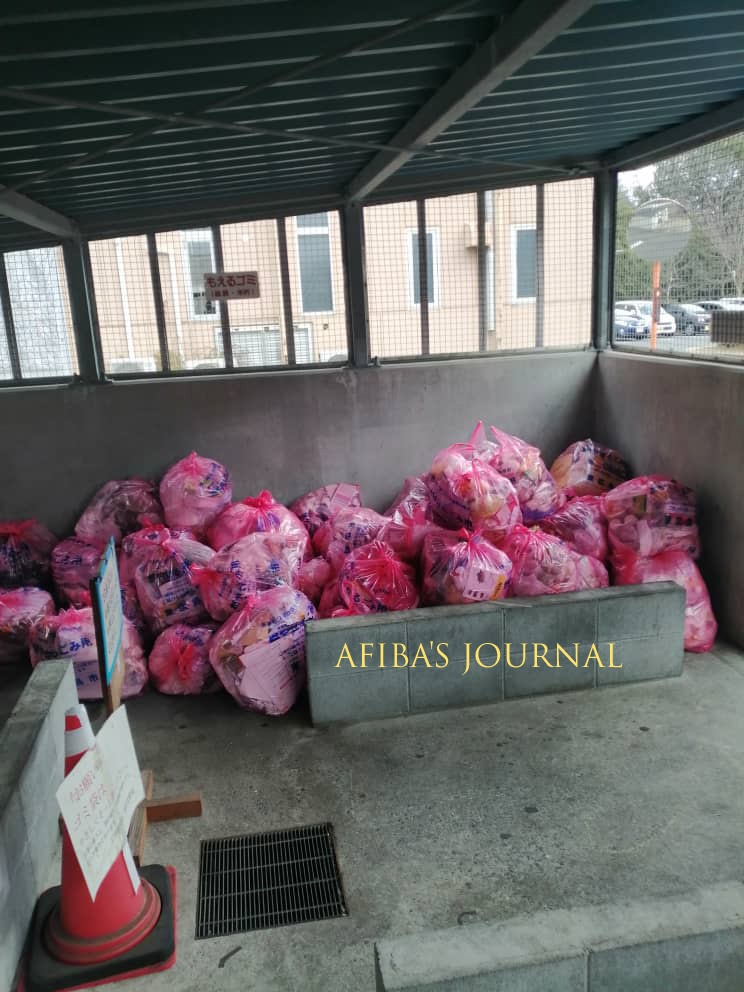 I can say with a certain amount of surety that if such is provided, people who deliberately take delight in dumping refuse in gutters when it rains will have a new hobby to be experimenting with.

Now the second factor in the TRIGONOMETRY is the power and law of the state to provide designated rubber bags for every category of trash. It’s not new that trash is sorted before being disposed off in many advanced countries; even in Ghana, some organisations do, though not meticulously.

The difference with Japan is the special bags in colours of yellow, blue, pink, orange or purple depending on the area you live and the components of trash. Yes! So that means, you cannot live in Kwabenya (a suburb in Accra, Ghana) and drop your trash in Dome on your way to Achimota. It is criminal and you will pay a fine once you are captured by the ‘never sleeping cameras’.

It is illegal because the colour bags permitted for Dome trash may be yellow for glass bottles yet that of Kwabenya will be purple for the same glass bottle (remember no thick black polythene bags or ‘ewiase y3 sum’) so as you hold the yellow-coloured bag with empty glass trash to cross its designated enclave, erhmmm police are you on standby?

That is the power of the state and it is enforced to the latter. I remember when we moved from one accommodation to the other and we had to let go all our pink rubber bags because the new place only permitted blue bags. I know you are enquiring, are the bags fee? No, please. They are bought with hard-earned Japanese Yen, only that your cost in disposing off rubbish ends after buying the state coloured bags since you drop the trash in the “special rubbish room” in your house for free.

The state trash vehicles pick them up from the “borla rooms” every two days if they are household combustibles. So although the “rubbish rooms” provided by some landlords in apartments are big, they never get full. 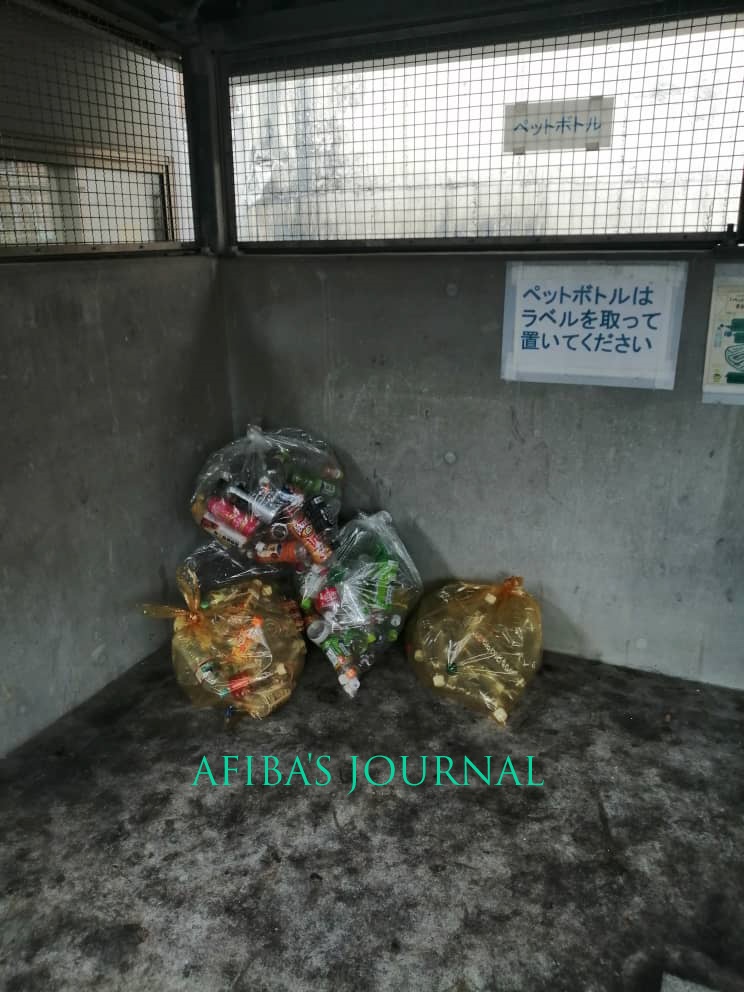 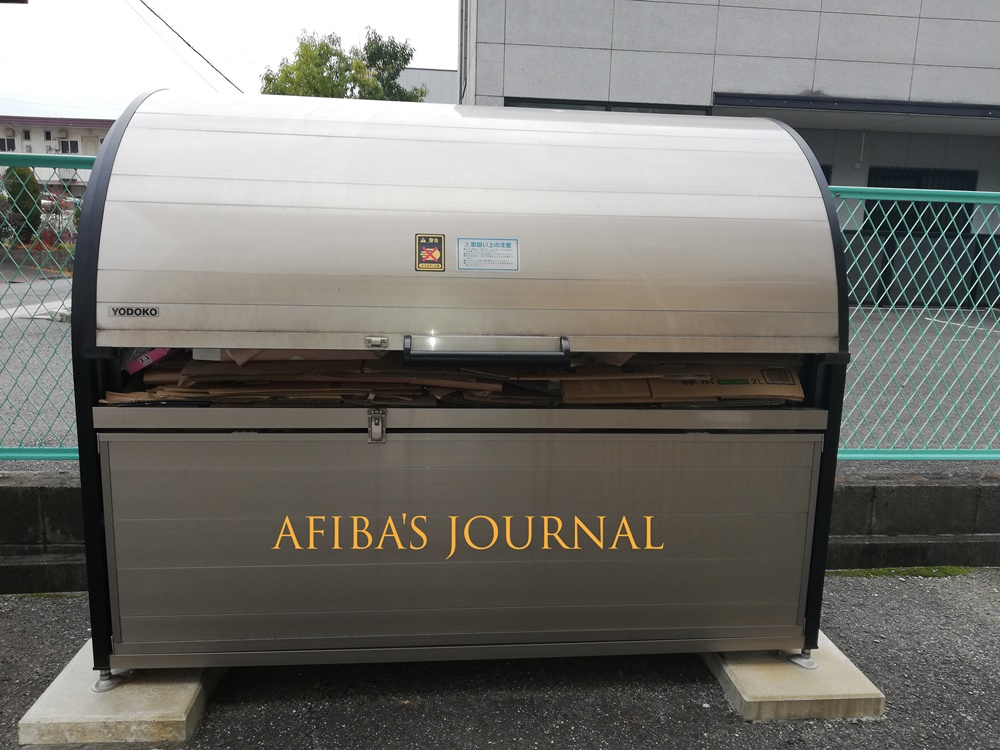 The third and final side of the TRIGONOMETRY is fulfilled by the ordinary citizen of Japan. For instance, It will be unheard of that you are dashed some purple rubbers which is designed for cans, glass containers, PET bottles and other recyclables and you decide to fill it with household combustibles because that is what you have in abundance. NO! The Japanese you read from my article on (JAPAN WHERE EVERYONE MURMURS….) are law-abiding to the latter and so under no circumstance will that be done.

For me as a Ghanaian villager, this is where I wish all my fellow Ghanaians had this ‘absurdly’ disciplined and obedient spirit, so that if the first two sides of the TRIGONOMETRY is fulfilled, our efforts to make our country clean will not be in vain.

Lest I forget, let me add this. Did you know that in Japan you will have to wash your cans and clean your bottles before disposing them off? Interestingly that is the rule and everyone abides by it, so all mineral bottles, food cans, medicinal tubes as far as they are recyclable, should be washed thoroughly and the labels removed before dumping them. Wondering why? It is because the paper label is combustible trash, while the bottle itself is recyclable and these two have different trash rubbers and containers.

Is this not encouraging? The work of the “Japanese Zoomlion” is much descent and loving I guess.

Additionally, because you are not charged for dumping rubbish in the “special borla rooms”, anyone can pick up a litter on the floor (though you may not even see one) and put it in its place in the rubbish room available or you take it your home to dispose it off at no cost. This way, the society is always kept impeccably clean.

I couldn’t end if I didn’t echo that here in Japan, cleaning up after oneself is genetic. As a preschool teacher, I found it uncomfortable at first when 3-year-olds were asked to vacuum clean their classroom after lunch, but as I continued in the school, I understood that they do the same chore at home so it isn’t new to them. It is to help them grow up understanding that messing up is totally anti-Japanese. 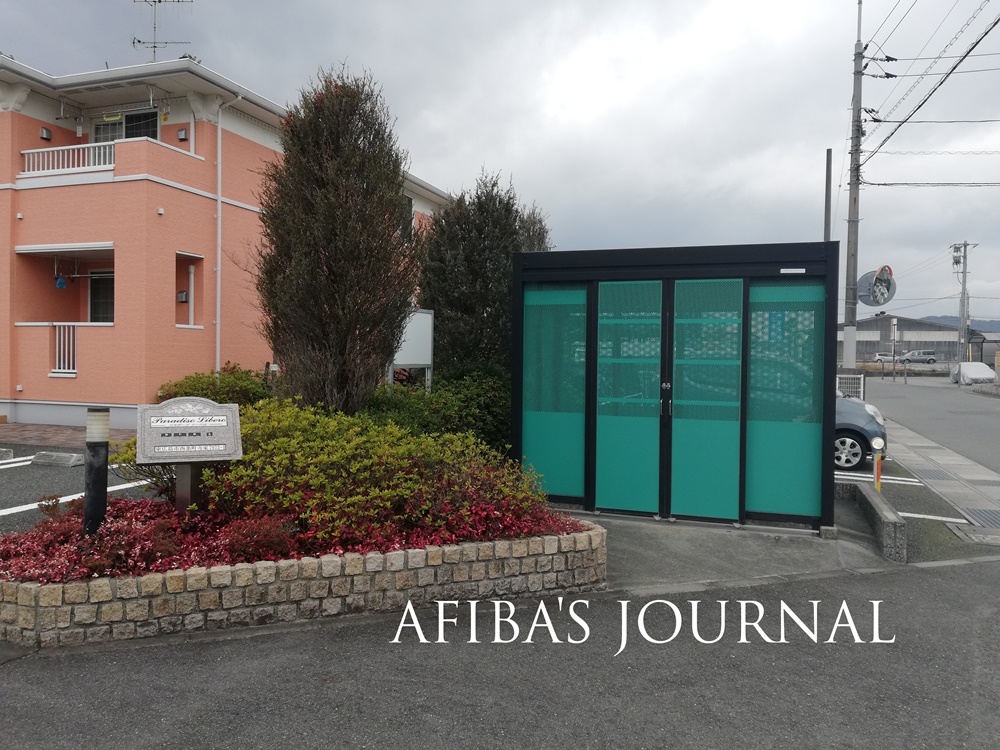 Will you say this is magic and too difficult an attitude to emulate in Ghana? I rest my case.

#the trigonometry of waste disposal in Japan
#the obedient landlord, the powerful state and the committed citizen
#cleanliness is genetic, mess is anti-Japanese

I have no hand in disappearance of the excavators - John Boadu