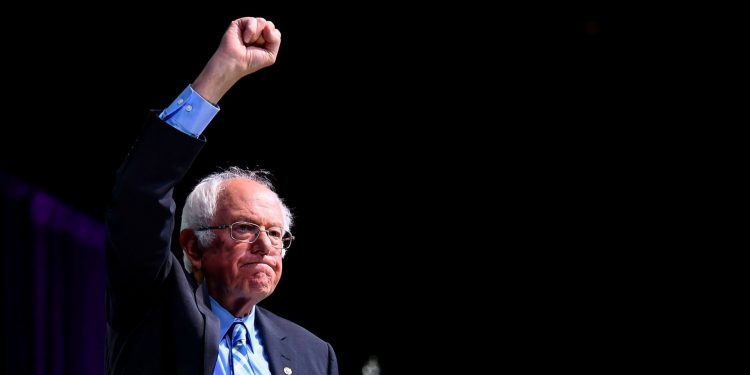 Vermont Sen. Bernie Sanders clinched a hard-fought victory in the first-in-the-nation primary in New Hampshire, as he battles with Pete Buttigieg to claim the mantle as the front-runner for the Democratic nomination.

After winning New Hampshire in 2016 with a margin of more than 20 points over Hillary Clinton, Sanders was expected to do well as the senator from a neighboring state. But the race tightened as results came in Tuesday night, once again producing a surprisingly close race between Sanders and Buttigieg, the former mayor of South Bend, Indiana.
All of the candidates quickly turned their attention to upcoming states like Nevada, South Carolina and more diverse states that will vote on Super Tuesday like California and Texas. But Sanders took a moment to savor his win, which marked an extraordinary comeback for a candidate who was all but written off by many pundits after he suffered a heart attack in early October.
Visit CNN’s Election Center for full coverage of the 2020 race
New Hampshire, which is famous for breathing new life into struggling candidacies, also delivered a rush of momentum to Minnesota Sen. Amy Klobuchar, who placed third after a strong debate performance Friday night that fueled a late surge in her support. Both Klobuchar and Buttigieg appear to have been buoyed by the large number of independent voters in the state — who are permitted to vote in either party’s primary.
The Granite State became another stumbling block for both Massachusetts Sen. Elizabeth Warren and former Vice President Joe Biden, who made the telling decision to abruptly abandon his election night party in favor of heading to South Carolina. 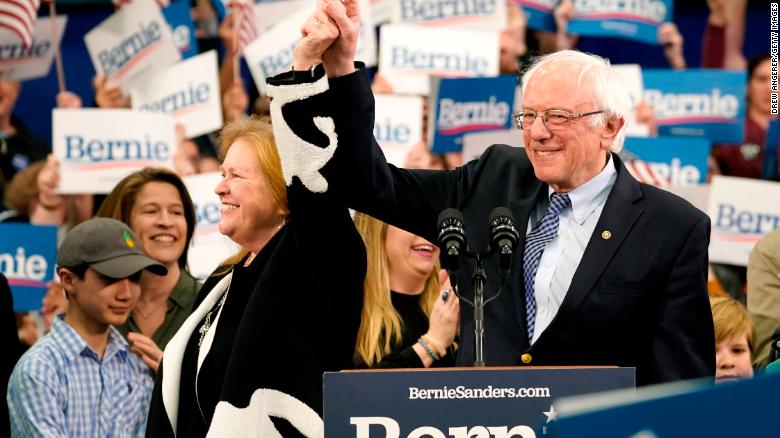 Sanders holds the hand of his spouse Jane O’Meara Sanders as he takes the stage during a primary night event on February 11, 2020 in Manchester, New Hampshire.
But it was Sanders who won the night. After his upstart bid against Clinton in 2016, he has built a far more formidable operation this cycle while focusing on broadening his appeal to build a coalition of young voters, working class voters and voters of color. No other candidate has matched his grassroots fundraising advantage, which has allowed the campaign to build robust turnout operations in the early stated, helping him in a deeply unsettled Democratic field.
On Tuesday night, the Vermont senator proclaimed his victory as “the beginning of the end for Donald Trump.” Though he congratulated his Democratic rivals, he implicitly took a swipe at Buttigieg and other candidates who are raising money for their campaigns through big-dollar donations. He argued that his campaign was centered on taking on billionaires and “candidates funded by billionaires.” 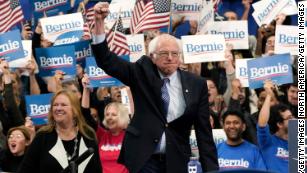 5 takeaways from the New Hampshire Democratic primary
“The reason I believe we are going to win, is that we have an unprecedented grassroots movement, from coast to coast, of millions of people,” Sanders told a raucous crowd at his election night party. “The reason that we are going to win is that we are putting together an unprecedented, multi-generational, multiracial political movement. This is a movement from coast to coast, which is demanding that we finally have an economy, and a government that works for all of us — not wealthy campaign contributors.”
Buttigieg, who was came out ahead in the still-contested Iowa caucuses last week, once again outpaced expectations and tied with Sanders in the delegate count, according to CNN estimates. In his own election night speech, Buttigieg pointed to his strength across disparate parts of New Hampshire, and to his appeal among independents and more conservative voters.
“Thanks to you, a campaign that some said shouldn’t be here at all, has shown that we are here to stay,” Buttigieg told supporters in New Hampshire Tuesday night. “So many of you turned out — diehard Democrats, independents unwilling to stay on the sidelines, and even some newly former Republicans ready to vote for a politics defined by how many we call in, instead of by who we push out.”
He expressed his respect for Sanders, noting that he admired the Vermont senator even as a high school student, but he continued to describe Sanders’ approach to politics as divisive.
“In this election season we have been told by some that you must either be for revolution, or you are for the status quo. But where does that leave the rest of us? Most Americans don’t see where they fit in that polarized vision, and we can’t defeat the most divisive President in modern American history by tearing down anybody who doesn’t agree with us 100% of the time,” Buttigieg said.
Sanders led in New Hampshire on Tuesday night among liberals, voters under 45 years old and whites without a college degree, three of his core constituencies, according to exit polls. Voters who wanted a candidate who can bring change to the country, as well as those looking for someone who cares about “people like them,” also favored him. Four in 10 voters under 45 cast their ballots for Sanders, more than double his nearest opponent; and he drew the support of nearly half of voters under 30 years old.
With 95% of precincts reporting, Sanders led with 26%. Buttigieg was in second with 24.4% and Klobuchar in third with 19.7%. It was a steep drop-off to fourth place for Warren, who had 9.3%, and Biden in fifth, with 8.4%. Warren and Biden will not win any delegates in Tuesday’s race, according to a CNN Decision Desk analysis. CNN is projecting President Donald Trump will easily win the state’s Republican primary, as expected.
In the all-important delegate count, CNN is estimating Sanders and Buttigieg both earned nine delegates on Tuesday, while Klobuchar won six. There are 24 delegates at stake.

As results came in, Klobuchar touted her “happy, scrappy campaign” and told her supporters in New Hampshire that their effort had “beaten the odds every step of the way.” She said that the election would prove that “the heart of America is bigger than the heart of this guy in the White House.”
“Tonight is about grit, and my story, like so many of yours, is one of resilience,” Klobuchar said. “I announced my candidacy in the middle of a Minnesota blizzard. And there were a lot of people that predicted I wouldn’t even get through that speech, but not the people of my state, and not the people of New Hampshire. Except, then they predicted that we wouldn’t make it through the summer. We did. Then they predicted we wouldn’t make it to the debates and Man, were we at the debate in New Hampshire.”
“We’ve been strong and we’ve never quit,” the Minnesota senator continued. “I think that sounds pretty good for a president. Across the months, and months, and miles of this race, we redefined the word grit.” 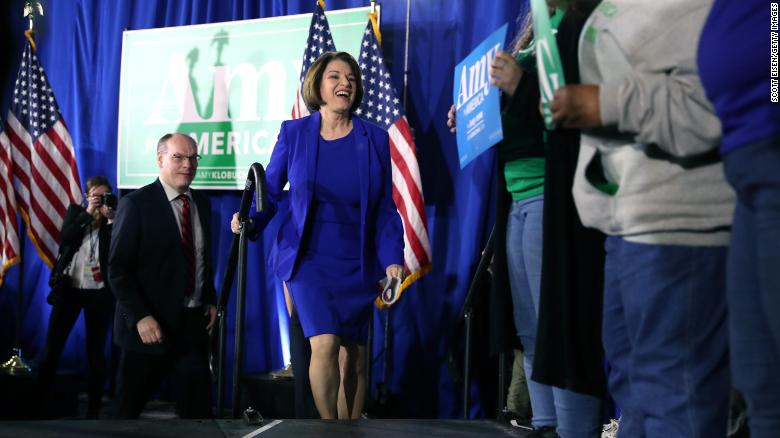 Klobuchar takes the stage with spouse John Bessler during a primary night event at the Grappone Conference Center on February 11, 2020 in Concord, New Hampshire.
She alluded to unique hurdles that the female candidates have faced — the fact that a large portion of voters still worry that a female nominee would face a more difficult climb against Trump than a male candidate. The exit polls in New Hampshire Tuesday night bore out that concern among voters. Thirty percent of voters polled said they believe it would be harder for a woman to beat Trump, while 11% said it would be easier. Fifty-eight percent said there would be no difference.
Klobuchar said people have told her, just as they have told Warren, that “they didn’t think a woman could be elected.”
“In my case, it was elected to the US Senate; no woman had ever done it before,” Klobuchar said. “But I came back. I defied expectations and I won. … And tonight in New Hampshire, as everyone had counted us out, even a week ago — thank you, pundits — I came back, and we delivered.”

Tough night for Warren and Biden

Before the votes were even tallied, Warren’s campaign manager pointed in a memo to her ability “to organize in all 57 states and territories” and argued that no one candidate “has yet shown the ability to consolidate support.”
When the Massachusetts senator took the stage early in Manchester, New Hampshire, she congratulated Sanders and cast herself as the unity candidate, noting that Biden, Buttigieg and Sanders have all targeted one another over the past week.
“These harsh tactics might work if you’re willing to burn down the rest of the party in order to be the last man standing,” Warren said. “But if we’re going to beat Donald Trump in November, we are going to need huge turnout within our party, and to get that turnout, we will need a nominee that the broadest coalition of our party feels they can get behind. We can’t afford to fall into factions. We can’t afford to squander our collective power. We will win when we come together.”
As Biden and Warren sought to recalibrate their campaigns, businessman Andrew Yang and Colorado Sen. Michael Bennet both dropped out of the race after results began coming in. 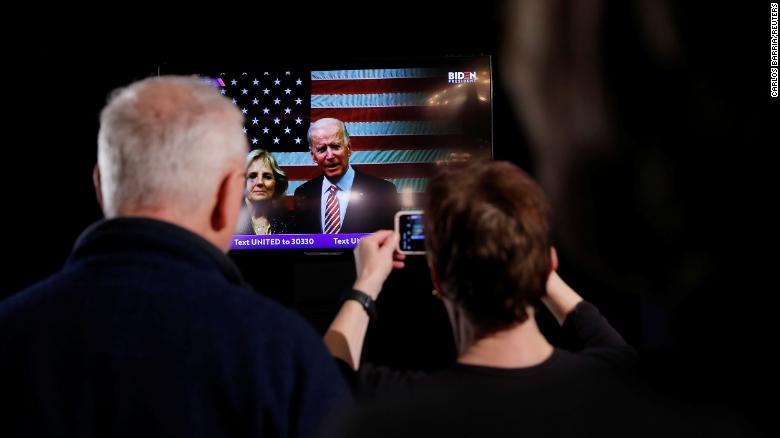 Biden accompanied by his wife Jill speaks to supporters on televised message from South Carolina at his New Hampshire primary night rally in Nashua, New Hampshire
Biden, who finished fourth in Iowa, dismissed predictions of his demise during a visit to a polling location in New Hampshire on Tuesday morning. But he was already in South Carolina by the time the New Hampshire results rolled in. He hopes to draw attention to his lead in the Palmetto State, casting it as a chance to prove that his strong support among African American voters could carry him to the Democratic nomination.
“We just heard from the first two of 50 states,” Biden told supporters in South Carolina. “Where I come from that’s the opening bell, not the closing bell. The fight to end Donald Trump’s presidency is just beginning.”
In a nod to the lack of minority support for two of his key rivals, Buttigieg and Klobuchar, Biden emphasized that African American voters have historically played an outsized role in selecting the nominee of the Democratic Party.
“We need to hear from Nevada, South Carolina and Super Tuesday states and beyond. Look we’re moving into an especially important phase (of the race), because up until now, we haven’t heard from the most committed constituency in the Democratic Party — the African American community — and the fastest-growing segment of society — the Latino community,” Biden continued. “Ninety-nine point nine percent — that’s the percentage of African American voters who have not yet had a chance to vote in America.”
But Biden’s biggest problem now is that he has built his entire campaign on the premise that he is the most electable candidate against Trump. His fourth-place finish in Iowa and a fifth-place finish in New Hampshire eviscerated that argument.
Six in 10 Democratic primary voters in New Hampshire said they were more focused on finding a candidate who could beat Trump, than finding one who agreed with them on the issues.
ShareTweetSendSend
Previous Post 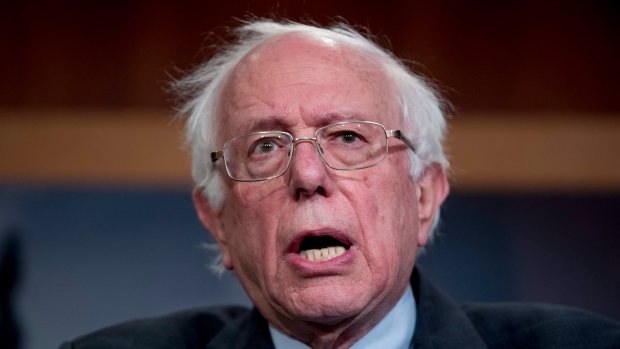