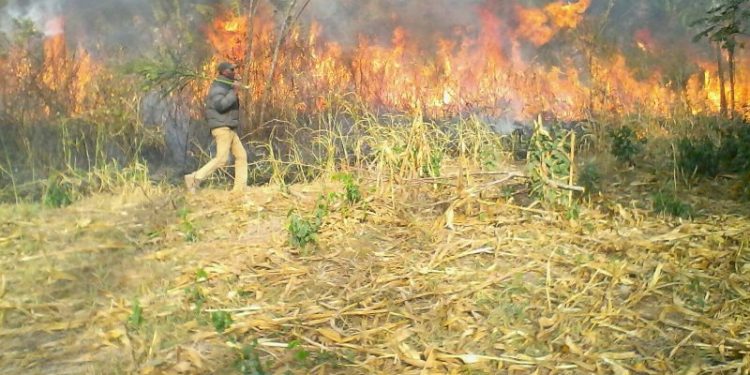 A 200-acre mango plantation has been destroyed by fire at Tainso in the Tain District of the Bono Region.

“A bush fire has burnt my farm. I don’t know the source of the fire. All that I know is that the fire just entered my farm and has burnt more than 200 acres out of my 300-acre farm. I have been doing this for so many years now. I started this farm as far back as 2010 and this is the first year that I’ve experienced such a thing because I put in every effort to protect the farm. So it is rather unfortunate. I am appealing to the government or anyone that matters who can assist me to help me get the farm onto its feet,” he pleaded.

A few weeks ago, Mr. John Dimah, the 2019 National Best maize farmer lost 31 acres of his maize farmland to fire in Tumu in the Sissala East District of the Upper West Region.

According to him, the tragedy happened while he was away for a funeral in Kusali.

He noted that 21-acres were harvested, while 10 other acres were to be harvested before the destruction.

He estimated that he harvests about an average of 35 to 40-kilogrammes per acre of the mini bags, thereby, resulting in an initial loss of 1,147 mini bags of maize.

M.anifest named brand ambassador for Barclays Bank as it rebrands to Absa