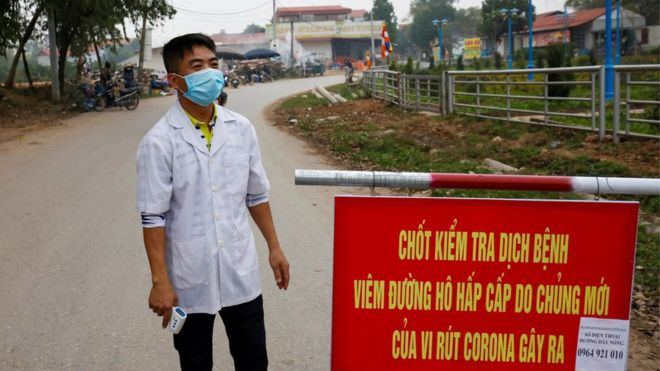 Vietnam has put 10,000 people in quarantine after six cases were found in villages north of Hanoi

Coronavirus cases are not rising dramatically outside China despite a spike in Hubei province, the World Health Organization (WHO) says.

The only exception was on a cruise liner docked in Japan, where 44 new cases were reported, bringing the total there to 218.

There was also no major shift in the coronavirus’s pattern of mortality or severity, according to the WHO.

The latest figures show 121 new deaths in China, bringing the total to 1,380.

The total infections jumped by 5,090 to 63,851 cases on 13 February, the National Health Commission said on Friday.

The fatalities include Li Wenliang, a doctor who tried to alert authorities to the virus early on but was accused by police of “spreading rumours. His death on 7 February provoked a burst of public anger and grief.

The latest figures from Hubei recorded 116 deaths and 4,823 new cases. That is a smaller increase than the previous day when there was a spike with 240 new deaths and nearly 15,000 new cases.

However, most of this was down to Hubei using a broader definition to diagnose people, said Mike Ryan, head of WHO’s health emergencies programme.

“This does not represent a significant change in the trajectory of the outbreak,” he said.

Outside China there had been two deaths and 447 cases in 24 countries, he said.

On Thursday Japan announced its first coronavirus death – a woman in her 80s who lived in Kanagawa, south-west of Tokyo.

The woman’s diagnosis was confirmed after her death and she had no obvious link to China’s Hubei province, the epicentre of the outbreak, Japanese media reported.

On Thursday, the US state department said it was “deeply concerned” about the possible effect of an outbreak in North Korea, which has so far not reported any cases.

What is happening on the Diamond Princess?

The vessel is in quarantine in Yokohama. Not all the 3,700 people on board have been tested yet.

People with the virus are taken to hospitals on land to be treated, while those on board are largely confined to their cabins.

However, on Thursday Japan said it would allow those aged 80 or over who have tested negative for the coronavirus to disembark.

Health Minister Katsunobu Kato said they could be allowed off the ship as early as Friday but would have to stay in accommodation provided by the government, the Japan Times reported.

Meanwhile, another cruise ship – the MS Westerdam – carrying more than 2,000 people docked in Cambodia after being turned away by ports in Japan, Taiwan, Guam, the Philippines and Thailand despite having no sick patients on board.

What’s behind the Hubei spike?

Until Wednesday’s increases, the number of people with the virus in Hubei was stabilising.

The new cases and deaths in the province have pushed the national death toll above 1,350 with almost 60,000 infections in total.

White House economic advisor Larry Kudlow said there had been “surprise” in the US at the new cases.

“We’re a little disappointed in the lack of transparency coming from the Chinese, these numbers are jumping around,” he said.

Mr Ryan, from the WHO, said the spike reflected a change in the way cases were diagnosed and many were days or weeks old.

Only Hubei province – which accounts for more than 80% of overall Chinese infections – is using the new definition to diagnose new cases. 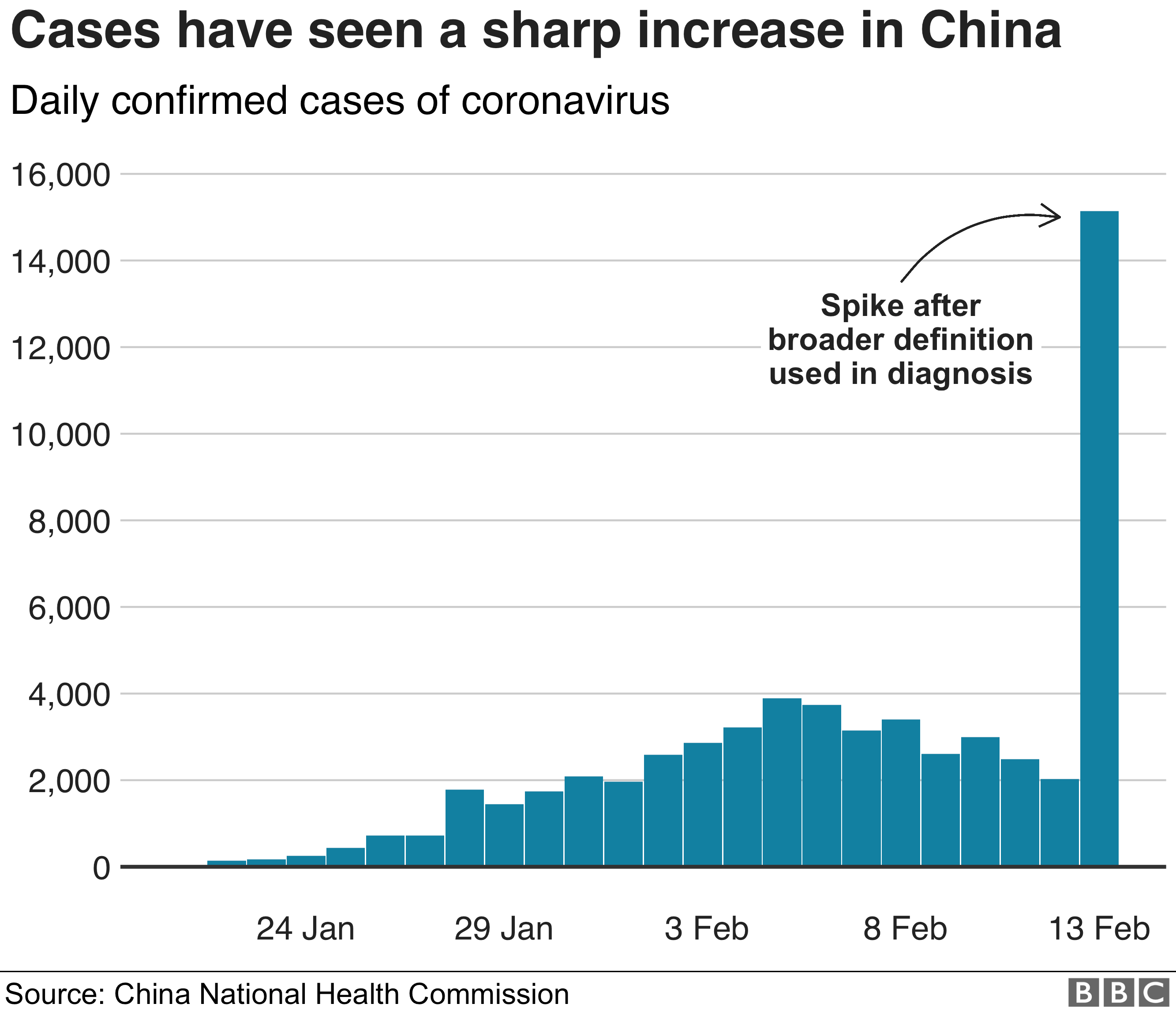 In the UK, officials are attempting to trace the contacts of the latest person to be diagnosed with coronavirus. The woman, who flew into London Heathrow from China a few days ago, is the ninth case to be confirmed

Australia has extended its ban on people coming from mainland China for another week, to 22 February
China said it would stagger the return of children to school – several provinces have closed schools until the end of February

In Vietnam, which borders China, thousands of people in villages near the capital, Hanoi, have been put under quarantine after several cases were discovered. Vietnam has now confirmed at least 16 cases

The Red Cross has called for sanctions relief for North Korea, which would allow the aid agency to transfer funds to buy equipment. Testing kits and protective clothing are urgently needed to prepare for a possible outbreak, it says

British rap star Stormzy has postponed the Asian leg of his tour – he had been due to play in locations including Shanghai, Hong Kong, Singapore and Malaysia in March

A Russian woman – who was put into a coronavirus quarantine but escaped – is resisting attempts by officials to bring her back to the hospital by force. Alla Ilyina, 32, has been refusing to open the door of her St Petersburg apartment to police 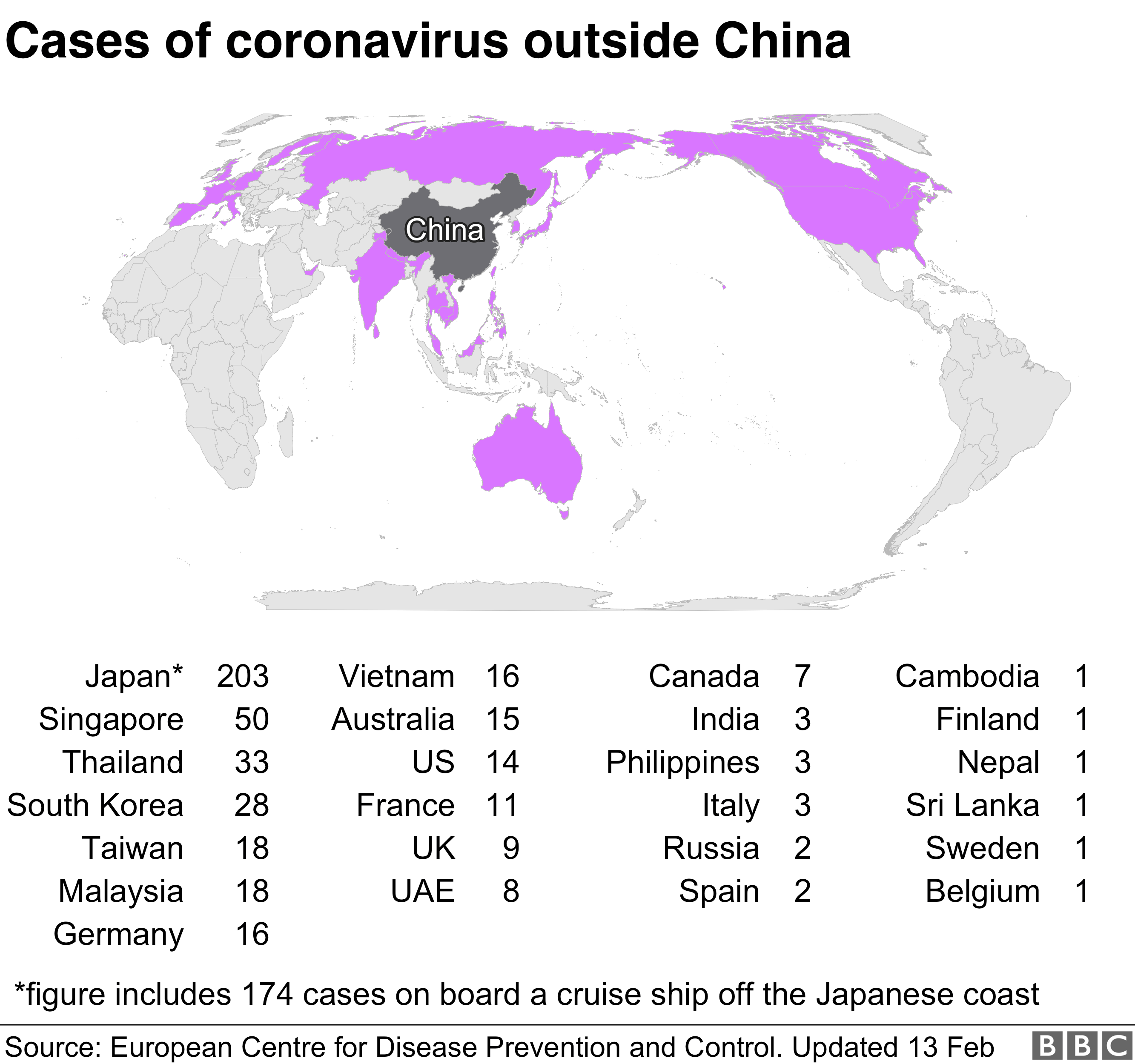