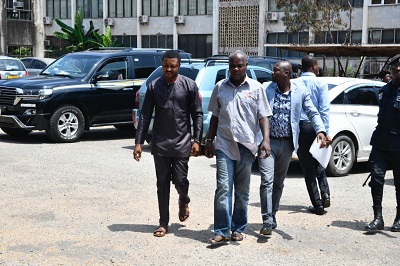 The Akpini Traditional council in Kpando and the families of Dr. Fred Mac Palm have joined calls for the government to grant bail to persons standing trial for allegedly plotting to destabilise the country.

The Bulla, Tendeku and MacPalm families in Kpando told the press that the continuous stay of Dr. Mac Palm in police custody is making life difficult for his dependents, including his aged mother.

Dr. Fred Mac Palm, a native of Kpando in the Volta Region and owner of the Bawaleshie based Citadel clinic was arrested, together with Donya Kafui, alias Ezor, a blacksmith from Alavanyo, and Bright Allan Debrah Ofosu, a freight manager on September 20 last year and have remained in custody since then.

But a cousin of Dr. Mac Palm, Delali Tendeku, who addressed the press, said as much as they will not want to interfere with the prosecutorial process, they plead with the government to not only expedite the prosecution but to also grant bail to their son.

“We are appealing to the government to expedite action in this work and to grant him bail so that the charges will move on smoothly.”

He, however, reiterated the family’s position that Dr. Mac Palm was innocent.

“I don’t believe that my brother has done this. The charges that have been levelled against him, I don’t believe… he can never plot against anybody. He is a God-fearing man,” Mr. Tendeku stated.

The accused persons are said to be part of a group known as the Take Action Ghana (TAG).

The group, according to the prosecution, planned to organise a series of demonstrations and also to overthrow the government.

They reportedly put together a plan to target some key installations including the Jubilee House, the Ghana Broadcast Corporation, the National police trading school, 37 Military Hospital and Burma Camp.

Their arrests, in October 2019, followed 15 months of surveillance and gathering of evidence on the activities of the suspects.

The government also said meetings between the civilian suspects and serving military personnel with a view to executing a plot to obtain weapons, take over key installations, and secure funding for the purported coup “were closely monitored.”