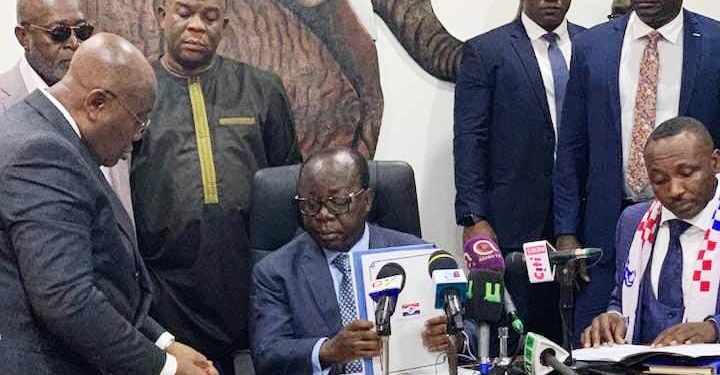 President Akufo-Addo has urged delegates of the New Patriotic Party (NPP) to peacefully elect parliamentary candidates for the various constituencies during the party primaries.

The President made these comments at the party’s headquarters when he filed his nomination forms to contest in the New Patriotic Party’s (NPP) presidential elections slated for April 25, 2020.

“We are going to elect our parliamentary candidates on 25th April; I’m appealing to you to do that peacefully so that there is no strife or acrimony to disturb the party.”

President Akufo-Addo is expected to contest unopposed as he was the only one to have picked forms and submitted same on Thursday, February 20, 2020; the deadline for filing of nominations.

Some of the constituencies have seen some level of violence in the picking of the nominations even before the elections of the same on April 25 this year.

The Constituency Secretary of the NPP in the Adansi Asokwa Constituency, Samuel Awui was attacked by some other NPP supporters during the submission of nomination forms by a parliamentary aspirant, Sammy Darkwa on Monday.

The Secretary was apparently beaten by Mr. Darkwa’s followers after he allegedly declined to endorse the nomination forms of the MP aspirant when he received them at the party office.

He purportedly said he wanted to peruse the forms further at home before signing them. This led to anger among the aspirant’s supporters.

The NPP has slated April 25, 2020, to elect the remaining parliamentary candidates.

The leadership of the party is also charging all aspiring parliamentary candidates other than the sitting Members of Parliament a “Party Development Fee of GH¢30,000″.