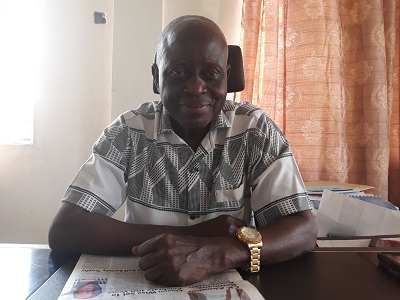 The District Chief Executive of Fanteakwa South in the Eastern Region, Ntori Adjabeng says some licensed small-scale miners are responsible for the muddying of some water bodies in the district.

He said many of the miners go beyond their concession areas and encroach into areas reserved as a buffer between water bodies and their sites.

The DCE lamented that the development has become difficult to fight especially as the miners have been given permit to carry out mining activities.

Mr. Adjabeng said some of the miners argue that the gold is mostly found along the water bodies and on water beds hence their operations in the buffer area.

“These small-scale miners are people who have been granted permits and so we can’t stop them, but our responsibility is to make sure that they observe the rules and regulations especially with regards to the buffer zone and this has been a problem to me and DISEC,” Ntori Adjaben said.

“When we go to the site together with the EPA, we demarcate the buffer area for them but they tell us that the gold is along the rivers and some are on the bed of the rivers. Some of them even wish they can divert the rivers. They have destroyed the area. You can’t stop them. The pollution of the Birim river even starts from Kibi, Sagyimase, Asikam and other areas where they use the machine to dredge the bank of the river and pollute the water and by the time it gets to our jurisdiction, it is already badly polluted,” he added.

The resurgence of illegal small-scale mining in some communities in the country has resulted in the pollution of many water bodies, leaving residents who depend on such water bodies with difficulty in accessing water.

There are reports that the pollution is not only committed by illegal miners but also small-scale miners with permits from the government.

Rivers such as the River Offin and Birim are now heavily polluted.

During a visit to some of the sites, illegal miners including women and children were seen engaging in the illegal activity with excavators and other equipment.

In the Ashanti Region, the Atwima Mponua district is noted as one of the key areas for illegal mining activities.

River bodies in the area were restored to their natural state when a ban was placed on illegal mining and all forms of small scale mining activities.

But shortly after the ban was lifted, some water bodies started turning brown in colour.