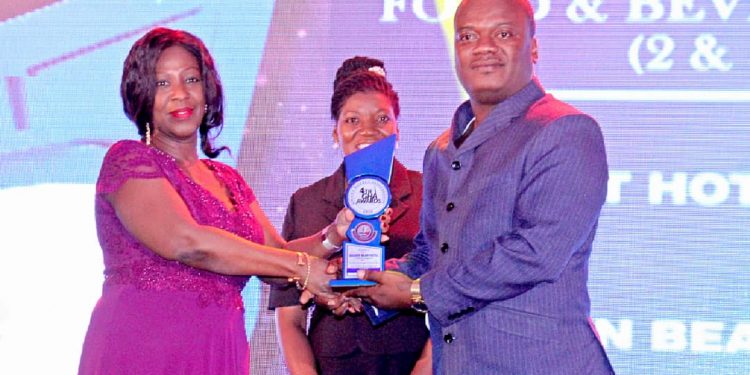 Golden Bean Hotel has won an enviable award for its uniqueness in the hotel’s food and beverage that has contributed to the development and growth of the tourism and hospitality industry.

At the 4th Ghana Hotels Association Awards held at the Accra Marriot hotel-Airport City, Golden Bean hotel was adjudged the Food and beverage team of the year (3 Star Category).

The Ghana Hotels Association Awards recognizes individuals, organizations and facilities that have over the years contributed to the development and growth of the industry.

The awards were categorized into, one star, two-star, three-star, four-star and five-star hotels that have proven to be satisfactory by the awards committee.

This year’s event was held under the theme: “Reducing the hotel rates in Ghana: The Role of Government and Hotel Operators.

Present was the Minister for Tourism, Arts and Culture, Mrs. Barbara Oteng-Gyasi who in her solidarity message underscored the role of the Ghana Hotels Association as key to the development of the Hospitality Industry.

Government she admitted acknowledged the hospitality industry as a major contributor to foreign exchange earnings and revenue to the state from taxation as such will continue to give it the necessary support to thrive.

Located in Kumasi, the Ashanti Regional capital, Golden Bean hotel aside its luxurious facilities invest a lot in the uniqueness of the hotel’s cuisine as demonstrated through the variety of buffet meals that begin with breakfast, goes on to lunch and finally to a buffet spread dinner uniquely presented.

Mr. Owusu Boachie who spoke to the Press reiterated that it was no surprise to see Golden Bean hotel awarded best food and beverage team touting that, the hotel is always particular about what they serve their guests. “Our target is to satisfy all guests with our large set of buffet that blends continental with local dishes and we believe this is the opportune time to invest more resources in ensuring different varieties are introduced for an exciting experience”.

The General Manager of the Golden Bean Hotel, Mr. Francis Alley Deyegbe who received with joy news on the award observed that the rich culture that exists in the Ashanti kingdom coupled with the cosmopolitan nature of Kumasi meant no stone is left unturned in presenting a large array and varieties in cuisine.

Golden Bean Hotel, he assured, will continue to invest in the delivery of quality services by training and updating its human resource on current trends to excel in all departments of a hotel establishment to promote Ghana’s hospitality industry.

The Golden Bean Hotel is a stylish hotel close to the heart of Kumasi, offering 51 rooms in four different categories. The hotel is small enough to give personal attention to every guest, and yet large enough to cater for up to 1000 people either as a banquet, conference or any other event. The hotel features a restaurant, a bar with a patisserie and two additional bars outside by the swimming pool and the immaculate gardens. There is a fully equipped gym on-site as well.