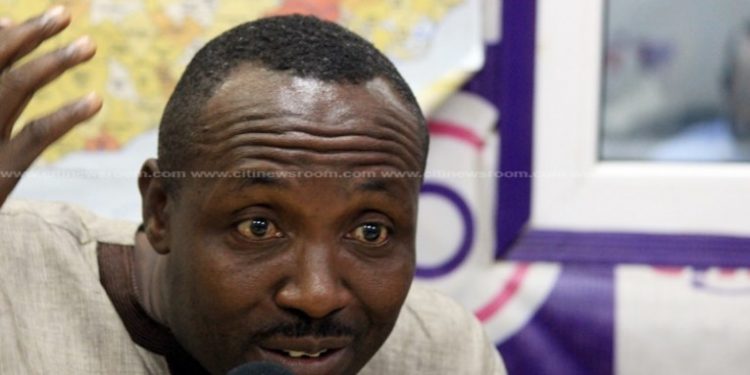 The General Secretary of the governing New Patriotic Party (NPP), John Boadu has denied allegations linking him to the disappearance of some excavators and other equipment seized from illegal miners in Ghana.

The suspended First Vice-Chairman of the NPP in the Central Region, Horace Ekow Ewusi who has become the centre of the controversial issue of the missing equipment has been captured in a viral  video allegedly claiming that he together with Mr. Boadu were tasked by the Minister of Environment, Science, Technology and Innovation, Prof. Kwabena Frimpong-Boateng, to use the seized excavators to mine in various concessions.

The money raised from these activities, Mr. Ewusi alleged would help fund the political activities of the NPP.

But responding to the claims on Asempa FM’s news analysis show, ‘Ekosii sen’ on Thursday, Mr. Boadu distanced himself from the claim, insisting that although he met the two officials regarding a community mining project, he has never received money from anyone or engaged in any illegal deal.

“The Environment Minister invited me for a meeting. It was at that meeting that I went to meet Ekow Ewusi. I even suggested to him we can use some of the young boys in the area we have trained for community mining. There, Ekow Ewusi mentioned that Chairman Wontumi has a large scale mining concession so we should engage him so he gives us portions of his land for the community mining. That was what he (Ewusi) said. So I said if the inter-ministerial committee trained people to properly do small scale mining after the ban, it will only be right to offer them job afterwards through community mining. I did not even have any discussion with him again after that engagement. So nothing in the video shows that I received something from anyone. He can’t say that. Never did I receive a penny from anyone,” said John Boadu.

Minister must be arrested

Already, the Ranking Member of the Mines and Energy Committee of Parliament, Adam Mutawakilu has called for the arrest of  Prof. Kwabena Frimpong-Boateng for his alleged role in the disappearance of the excavators.

“He [Frimpong Boateng] should be the one who should be arrested for first of all breaching the law and paving the way for others,” the MP told the media.

The MP also noted that the committee plans to push for the Ministers of Environment, Science and Technology and Lands and Natural Resources to appear before Parliament to answer for the hundreds of missing excavators seized from illegal miners.

“We will first of all push for the Minister; both Frimpong-Boateng and the Minister for Lands and Natural Resources to appear before us,” he said.

Mr. Mutawakilu added that the committee is still seeking clarity in various aspects of the case.

“We would like to have clear evidence of why they breached the law and why he [the Minister of Environment, Science and Technology] has not resigned and also the President’s responsibility; why he has not fired him,” he explained.

Lead campaigner of the Media Coalition against illegal mining, Ken Ashigbey has raised concerns over the circumstances that led to the controversial disappearance of the excavators.

He believes that the inability of the Minister of Environment, Science, Technology and Innovation and Chairman of the Inter-Ministerial Committee on Illegal Mining, Professor Kwabena Frimpong-Boateng, to even provide the exact number of the missing excavators is a clear indication of his [the Minister] total loss of control of his core mandate.

“My pain is hearing the Chairman of the Inter-ministerial committee say that the excavators are missing. He said it in a way suggesting that nothing else was being done. It had to take a statement that was issued before we realized that all these actions were being taken. The very roadmap on illegal mining had mentioned that excavators were going to be registered, carted and tagged so for me, the inter-ministerial committee should take the issue of the missing excavators very seriously. The Minister did not even tell us what the number of the missing excavators was so definitely for me, I realized at that point that, we were missing the plot.”

Prof. Frimpong-Boateng disclosed recently that most of the excavators that were seized from illegal miners had vanished.