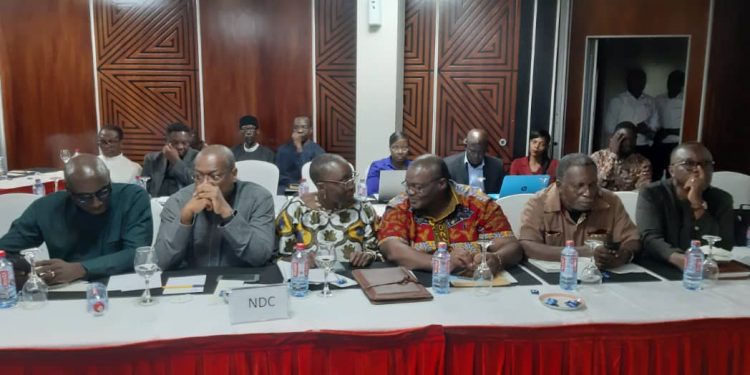 The National Democratic Congress  (NDC) has refused to sign the final roadmap to ending political vigilantism in the country.

According to the NDC, the working document on the roadmap is incomplete and called for more stakeholder consultations for better outcomes.

The opposition party took the decision at a ceremony to endorse the final document today, Tuesday.

A member of the NDC delegation at the dialogue, Alex Segbefia noted it is only through a broad consultative agreement that a meaningful roadmap could be adopted.

“The view of the National Democratic Congress is that the signing ceremony is premature. We do not think we have exhausted all the possible issues that are required to have a meaningful document that we can all work to. The reason we say so is that, when you look at the roadmap, it has 22 recommendations. Four of those recommendations relate to political parties. Eighteen of the recommendations belong to others, namely, the government, NCCE, civil society organizations, the  Electoral Commission etc. None of these are signatories to the document you are going to sign”, he added.

The Code of Conduct and Roadmap to ending political vigilantism was developed by a technical committee following a series of dialogues organized by the National Peace Council.

The move was necessitated by happenings at the Ayawaso West Wuogon by-elections in 2019.

Mr. Segbefia also intimated that going ahead to sign without the inputs of the other recommended stakeholders will cripple the effectiveness of the roadmap which will then yield no results in the fight against political party vigilantism.

“So in effect, if you look at the communiqué we have already signed with the Peace Council, they actually already cover the four items that are directly related to the political parties. We cannot be seen to signing a document for which other parties who are playing a part do not sign because then we cannot effectively monitor it… we think that the content is good but we do not have a way of making sure that it becomes effective.”

The National Peace Council, however, gave the NDC another opportunity to reconsider its position on the matter.

NPP goes ahead with signing

On their part, the representatives of the New Patriotic Party (NPP) signed the roadmap.

General Secretary of the party,  John Boadu was disappointed at the conduct of the NDC.

“The road map was not sprung on us we were given the opportunity to give our comments months ago. I am disappointed at our colleagues at the other side for not passing their comments to the peace council and the fact that they are aware they have the capacity to conclude this matter.”