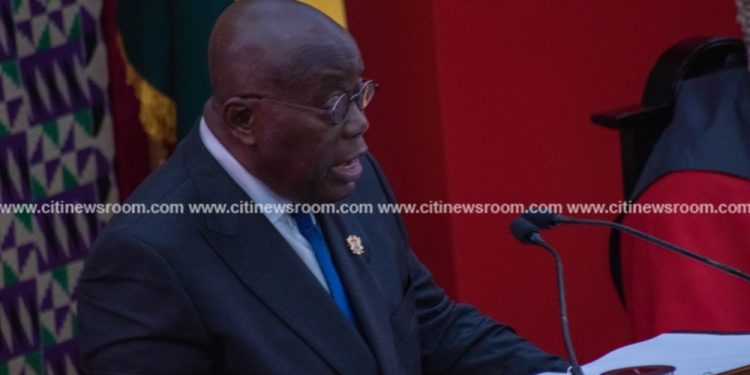 President Nana Akufo-Addo has assured that persons behind the disappearance of the seized excavators will not go scot-free regardless of their status or political affiliation.

In his fourth State of the Nations Address today, Thursday, President Akufo-Addo disclosed that the police have arrested and investigated some persons suspected to be complicit in the disappearance of the excavators seized from some illegal miners in the country.

“The Inter-Ministerial Committee, along with Operation Vanguard, were determined to disrupt galamsey activities, by confiscating equipment that was employed in these activities. In this regard, 12,000 ‘changfan’ machines that go on the river and scoop up the riverbed were seized and destroyed on-site. Some excavators were also seized, and a number of them have gone missing. The Police have arrested and charged some of the alleged culprits, and investigations are ongoing. No one involved will be shielded, no matter what their positions or political colours are,” the President said.

It has emerged that mining machinery including excavators, which were seized by the Operation Vanguard Task-force has disappeared.

This came to light when the Minister for Environment, Science, Technology & Innovation and Chairperson for the Inter-Ministerial Committee on Illegal Mining (IMCIM), Professor Kwabena Frimpong-Boateng made an official complaint to the police for investigation.

The six, include the suspended First Vice Chairman of the New Patriotic Party in the Central Region, Ekow Ewusi, who was also heard in an audio recording with Professor Kwabena Frimpong-Boateng discussing the prospect of mining on some concessions.

Seven of the seized excavators that went missing have been retrieved during an operation by the Inter-Ministerial Committee against Illegal Mining.

The seven are part of some 20 excavators that were impounded in Apraman and Topraman in the Eastern Region.

Three persons were arrested during the operation and have since been granted bail.

Leader of the team Nana Yaw Boadu in an interview with Citi News expressed the resolve of his outfit to retrieve all missing excavators.

“The team responsible for retrieving the excavators that have gone back to the miners and again stopping the operations of the galamsey people went to Apraman and other areas and we were able to impound 20 excavators but unfortunately out of the 20, we were able to track only ten to Apraman police station.”

“And out of the ten that were tracked to the Police station, seven were part of the seized ones that were returned to the miners. When we went there, the miners were able to disengage the excavators. You go there, you will notice that the monitor and other parts [of the excavator] have been removed to the extent that some removed the starter from the machine.”