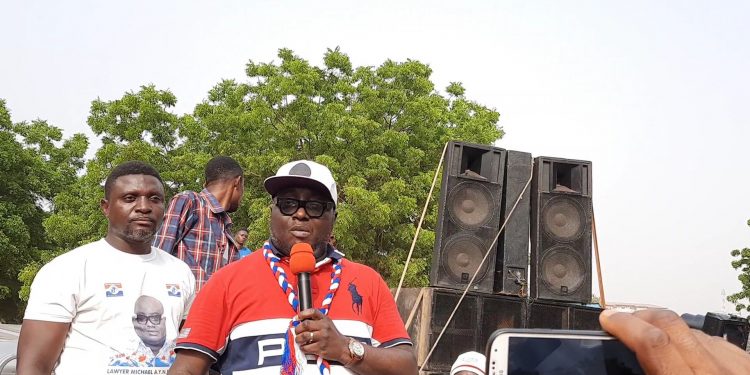 Aspiring Member of Parliament for Dome-Kwabenya, Michael Oquaye Jnr. has asked the incumbent MP and Deputy Majority leader, Adwoa Safo, to throw her weight behind him should he emerge victorious in the upcoming New Patriotic Party (NPP) parliamentary primary.

Mr. Oquaye Jnr. who is confident of winning the primaries on April 25, 2020 and subsequently become the next MP by the end of the 2020 parliamentary elections made the appeal when he addressed the media after filing his nomination forms.

“When I lost the last time, I put my opponent’s picture on my gate for all my followers to understand that the elephant is the winning symbol. So this time also, I hope when by the grace of God I win, my opponent will also put my picture on the wall and say to the followers that the elephant is the winning symbol. God willing or as the Muslims say, ‘Isha Allah’ victory will be ours and I may by the grace of God be crowned the next MP of Dome-Kwabenya.”

Meanwhile, Sarah Adwoa Safo has assured her constituents that she will complete all started infrastructural projects when she’s retained as MP.

Addressing delegates after filing her nomination forms to contest for the third time, Adwoa Safo said her outfit has commenced an exercise to fix street lights on all major roads in the constituency.

“These include, the reconstruction of the Atomic Roundabout Taifa Bankyiase road, asphalting of the Taifa township roads, construction of the supermarket road. For the road at Haasto, by the end of this tenure and for the four more years that I am seeking from my people, it will be completed.”

This is not the first time Oquaye Jnr. is making an attempt at the Dome Kwabenya parliamentary slot.

But Oquaye Jnr. however, lost to Sarah Adwoa Safo, who went on to win the seat during the general elections.