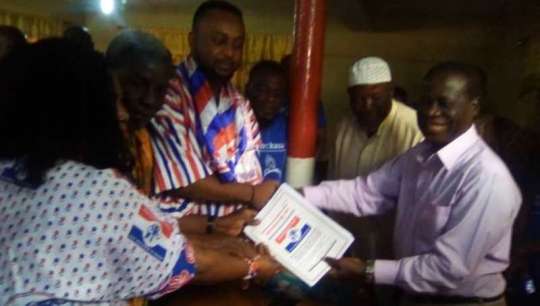 The Public Relations Officer for the Ministry of Education, Vincent Ekow Assafuah who doubles as an aspiring candidate in the upcoming New Patriotic Party (NPP) parliamentary primaries for the Tafo-Pankrono constituency in the Ashanti Region has called for decent campaigns amongst contestants.

“We should avoid insults, intolerance and dirty campaigns,” he appealed, saying steering the Party to another victory in the 2020 general elections required a collective responsibility.

According to him, the member of the party ought to remain focused and rally behind the government in its bid to transform the socio-economic fortunes of the country for the better, adding, they should stay off actions that could distract the NPP’s vision.

Mr. Assafuah was speaking to the Ghana News Agency (GNA) at Old-Tafo in the Tafo Municipality after presenting his nomination forms to the constituency party executives.

Events unfolding indicate that the Tafo-Pankrono NPP Parliamentary Primaries would be one of the hotly-contested polls, following the decision of the current Member of Parliamentary (MP), Dr. Anthony Akoto-Osei’s decision not to seek re-election.

This had led to about six aspirants expressing interests in contesting to get the mandate of the delegates.

He was a former President of the National Service Personnel Association (NASPA) while working in various capacities at the Party level as the Public Relations Officer (PRO) for the NPP’s Tertiary Students’ Confederacy (TESCON) – KNUST Chapter, among others.

The parliamentary aspirant, who is also a former acting Deputy National Communication Director – NPP, said the party needed an experienced and devoted person to champion its cause at the constituency.

His vision is to work in partnership with all identifiable stakeholder groups to promote the development agenda of the ruling NPP.

Mr. Assafuah said most importantly, he would be championing the cause and also lobbying for educational, health and youth development investment in order to better the lives of the electorate.

Receiving the nomination forms, the Tafo-Pankrono Chairman of the NPP, Moses Donkor, thanked the aspirant for showing interest in contesting for the seat.