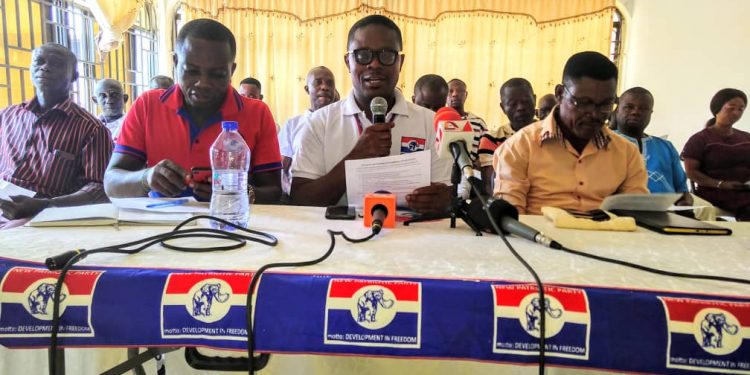 New Patriotic Party’s (NPP) Electoral Area Coordinators in the Kwabre East Constituency in the Ashanti Region have pledged their unflinching support for the Member of Parliament (MP) for the area in her bid to run on the party’s ticket for the second time.

Twenty-six (26) out of the thirty-one (31) Electoral Area Coordinators in the Constituency for the NPP explained that there have been appreciable levels of development in the health and education sectors as well as improved social amenities within the area since the MP, Madam Francisca Oteng Mensah took office.

The NPP members have described the performance of Ms. Oteng Mensah as unprecedented as compared to what her predecessors did for the constituency while in office.

At a news conference to announce their support for the MP, Electoral Area Coordinator for Aboaso, Kofi Abotare Dwomoh outlined some developmental initiatives by the Kwabre East legislator which included the provision of an ultra-modern office complex for the party in the constituency, rehabilitation of roads within the constituency, promotion of quality healthcare and the provision of teaching and learning materials to schools to improve the quality of education in the area.

“Many of us have been with the NPP since 1992 and we have witnessed the works of the previous MPs and as I said, I salute them, but considering the works of our current MP (Maame Serwaa), it’s very different”, he added.

Even as the MP is yet to officially pick her nomination forms to contest the party’s parliamentary primaries in April, the coordinators believe that Ms. Oteng Mensah deserves a second term to do more for the constituency, which is one of the strongholds of the NPP.

Also known as Maame Serwaa by her party members and constituents, the young legislator emerged winner in the 2015 parliamentary primaries of the NPP, beating the incumbent MP, Kofi Frimpong.

She also won massively in the 2016 elections to become the Member of Parliament (MP) for the Kwabre East Constituency.

There has not been any complaints from any member of the NPP in the constituency seeking to contest the sitting MP as it is the case in other constituencies within the Ashanti Region.

Some persons in the NPP who have declared their intentions to contest some sitting MPs in constituencies in the Ashanti Region, have raised red flags and accused party executives of trying to prevent them.