Ramaphosa takes over as AU chair, says Africa ‘no longer a pit stop’ for imported goods 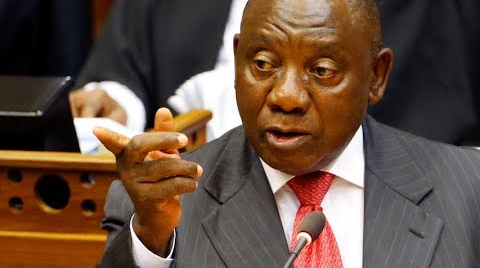 South Africa President Cyril Ramaphosa used his inaugural address as chairperson of the African Union to warn that the continent will no longer serve “as a pit stop for goods” not produced on its shores.

The president was delivering his acceptance speech at the AU heads of state summit in Addis Ababa, Ethiopia, on Sunday, where he took over the chair position from Egyptian President Abdel Fattah el Sisi.

Ramaphosa said the AU needed to put measures in place to ensure that the implementation of the African Continental Free Trade Area (AfCFTA) agreement did not result in goods from other countries passing through the continent with minimal value addition in Africa.

The AfCFTA was due to be implemented by all member-states of the AU at the beginning of July 2020.

“We must all ensure that the AfCFTA does not become a conduit for products with minimal African value addition to enter and penetrate our local markets under the guise of continental integration,” he said to applause.

Ramaphosa said there ought to be a reasonable standard set for what constituted a product that was proudly made in Africa.

“The era of imperialism and colonialism in which Africa is a pit stop in the global assembly line is past,” he said, adding that the playing field for African businesses must be levelled so they can operate in a large-scale market.

The agreement is to be implemented under Ramaphosa’s chairpersonship of the AU, and will allow for tariff free passage of goods across the continent.

There are outstanding issues related to the agreement, and Ramaphosa said he will work to finalise those issues before an extraordinary summit on the matter is held in SA in May.

“We have to find more practical and more sustainable ways in empowering the women of the continent so that we move beyond the clichés and the general statements that we pronounce on podiums,” he said.

Ramaphosa said there must be an allocation of 25% of public procurement in all African countries for women-owned businesses.

Currently, women-owned businesses are given 1% of public procurement, he said.

“It is not unreasonable to advocate for preferential public procurement legislation to advantage women-owned business and for the establishment of preferential trade and customs regimes for women. It must be done,” he said.

Ramaphosa told the room- which was filled with male leaders- that democracy cannot exist without women.

Turning to conflicts around the continent, Ramaphosa called out foreign powers for meddling and sponsoring wars in Africa.

“We must also deal with the actions of other countries outside of our continent who are fighting proxy wars and fuelling ongoing conflicts on our continent,” he said.

This was in reference to the ongoing conflict in Libya where countries such as Turkey and Russia were backing rival factions of the conflict.

“The principle of finding African solutions to African problems must be our overriding theme in addressing all conflicts on our continent,” Ramaphosa said.

Before he concluded his address, Ramaphosa denounced US President Donald Trump’s peace plan for Palestine as a “Bantustan-type of construct”.

According to the plan, Israel would annex “the vast majority” of Israeli settlements in the West Bank that are illegal.

Palestinians would be given a few towns scattered across the area, the plan noted. Ramaphosa said this was reminiscent of the SA apartheid regime.

Much to the ire of Morrocco, Ramaphosa further reaffirmed his unwavering support for Western Sahara to be an independent and sovereign state.