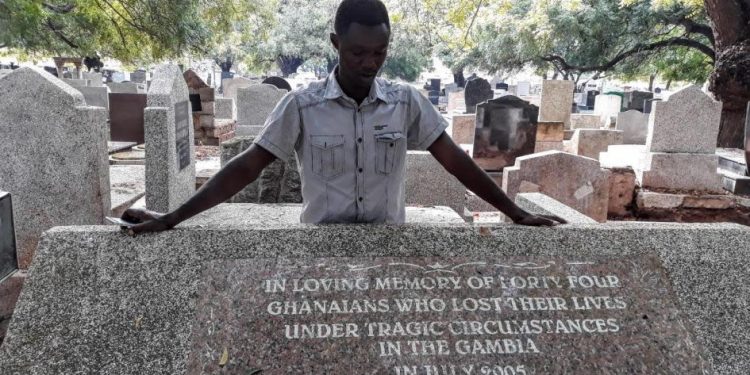 Martin Kyere, a survivor and spokesperson for the victims’ families of the Gambian massacre based his doubts on the fact that no DNA testing was conducted on the remains that were exhumed from a mass grave in The Gambia in 2009, nearly four years after the mass burial in The Gambia, and reburied at the Osu Cemetery.

He also said there was a heavy stench around the coffins containing the eight bodies when they were brought to the funeral grounds at the forecourt of the State House, adding that the coffins were not opened.

Martin’s comments are contained in an upcoming documentary film titled “The Massacre of Ghanaians in The Gambia: Justice in Limbo?” due to be premiered on Thursday, February 27, 2020 in Accra.

The documentary by the Jammeh2Justice Ghana Campaign, a Coalition of Civil Society Organizations (CSOs) examines the true events that occurred before, during and after the murder of the 44 Ghanaians and other West African migrants and was put together following months of field investigations and research undertaken in five West African countries – Senegal, Gambia, Togo, Nigeria and five regions in Ghana.

It is recalled that in July 2005, about 56 West African migrants including about 44 Ghanaians who were using an unapproved route through The Gambia to seek greener pastures in Europe were reportedly killed in The Gambia.

The eight Ghanaians were summarily killed by the Junglers, a paramilitary unit within the Gambian military that takes orders directly from President Yahya Jammeh on the first night, July 23rd, 2005, when they arrived in The Gambia and their bodies dumped by the road in front of Brufut Forest, near Ghanatown, a town predominantly inhabited by Ghanaians living in The Gambia.

The remaining migrants were shot over several days in Cassamance in Senegalese territory. Martin escaped.