Tamale: Three arrested after being ‘tricked’ into selling drugs to police 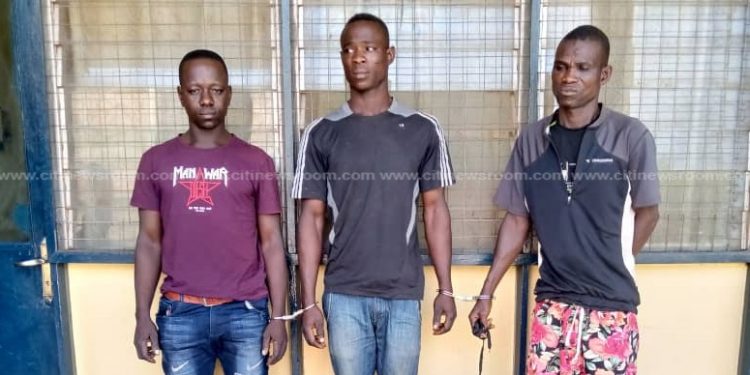 Three farmers selling drugs have been arrested after a sting operation by police in Tamale.

The farmers — Mohammed Ziblim, 26 years; Waaki Prosper, 26 years and Yaw Signari, 25 years — from a village called Muntanaya in the Wulensi District, fell for the ruse by undercover police officers who posed as buyers of the drugs.

Sources within the community said the accused persons are notorious drug peddlers who supply large quantities of narcotics to buyers.

The undercover officers from the Drug Law Enforcement Unit of the Ghana Police Service in Tamale, Northern Region arrested three men for selling the dried leaves suspected to be marijuana.

The three were granted bail by the Tamale Circuit Court presided over by His Lordship Justice Anthony Twumasi Appiah on Wednesday, February 5, 2020.

Presenting the facts of the case to Citi News, Detective Chief Inspector Mariam-Nuhu Billa, of the Drug Law Enforcement Unit of the Tamale Police said, somewhere in November 2019, a resident around Kpandai called into the unit and reported about the activities of drug peddlers around Wulensi and Kpandai environments.

According to the Detective, the Unit commenced an investigation into the matter by engaging a native of the area.

The source agreed to help the detective to get any quantity of the substance to buy.

The relationship between the detective and the dealer deepened as engagements intensified until a date was fixed to go and buy the drugs.

On Sunday, February 2, 2020, the team arrived at the community in plain clothes as buyers.

The accused persons later appeared with four fertilizer bags and king cracker box full of the dried leaves to sell to the plain cloth personnel.

According to Detective Chief inspector Mariam-Nuhu Billa, she told the people to join them in the pickup vehicle so they could be paid after a long period of negations.

The Inspector said, she then instructed her driver to drive straight to the Wulensi police station where they were arrested and brought to Tamale.

The accused have been charged with unlawful possession of Narcotics substances.

They will reappear in court on March 5, 2020 by which time, the National Forensic Laboratory would have concluded examinations on the substances, Detective Chief Inspector Mariam-Nuhu Billa said to Citi News.