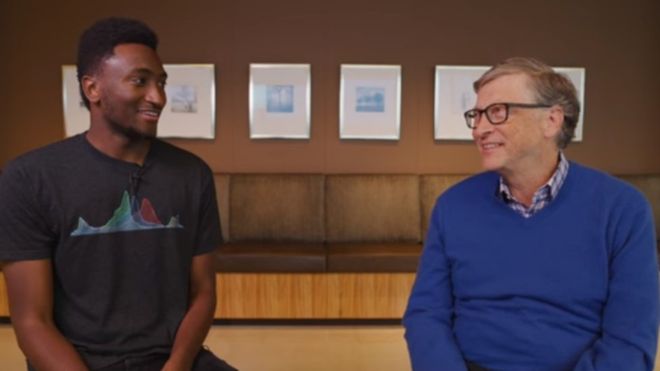 Elon Musk has lashed out on Twitter after billionaire Bill Gates praised Tesla in an interview – but admitted he had chosen a Porsche as his first electric car.

Mr Musk later described his own conversations with the Microsoft founder as “underwhelming”, in a tweet.

He was replying to a Tesla fan who expressed surprise at Mr Gates’s choice of car because, they said, he was “really smart”.

Many of the replies supported Mr Gates.

“He’s only saving millions of lives around the world…” wrote one.

“You want to be underwhelmed… call Tesla customer service,” wrote another.

In the YouTube interview with Marques Brownlee, which has had more than two million views, Mr Gates expressed concern that the mileage between charges, the length of charging time, and the “premium” cost of electric vehicles were all factors currently deterring buyers.

However, he highlighted Tesla as a firm that had helped to grow the market.

“And certainly Tesla, if you had to name one company that’s helped drive that, it’s them,” he said.

He then said he had not chosen the brand himself.

“You know I just got a Porsche Taycan, which is an electric car, and I have to say, it’s a premium-priced car but yeah, it is very very cool,” Mr Gates said.

Elon Musk is no stranger to squaring up to others on Twitter.

In the past, he has tweeted that Mark Zuckerberg’s understanding of AI is “limited” and described Jeff Bezos’ ideas about living in space as “mak[ing] no sense”.

In December 2019 he won a defamation case against a British cave diver whom he had labelled “pedo guy” on Twitter.

The diver had helped to rescue trapped Thai schoolboys from a cave and had rejected Mr Musk’s offer of help.

Mr Musk has also got his own company into hot water.

In 2018, he tweeted that he planned to make Tesla a private company and said he had secured funding to do so.

He later said he was joking but both he and the firm were ordered to pay $20m by the US financial regulator for disclosing information that had affected the market.

He then went back on Twitter to blast the regulator – the Securities and Exchanges Commission (SEC) – describing it as the “Shortseller Enrichment Commission”.

As part of an agreement with the SEC he was warned not to share information about Tesla in any form without approval, and resigned as chairman of the firm.