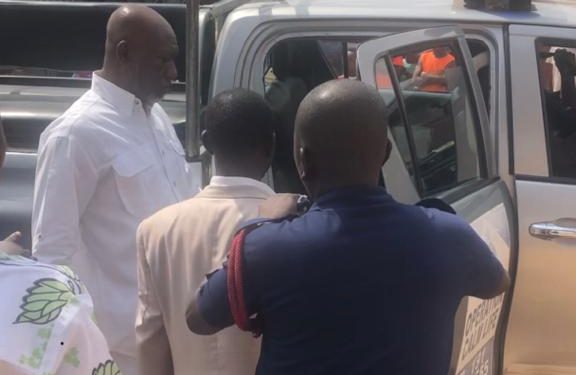 Apostle Ankrah was first arrested on Wednesday, March 18, 2020 for violating the ban on public gatherings

Police in the Ashanti Region has rearrested the head pastor of Open Arms Ministries, Apostle Kofi Nkansah Sarkodie, for once again holding a church service despite the ban on religious activities because of the novel coronavirus pandemic.

Apostle Kofi Nkansah Sarkodie and two of his church members were first arrested on Wednesday for defying the president’s order as they held a church service.

He was subsequently granted bail together with the two church members as the police in a statement indicated that they were monitoring them.

But the Ashanti Regional Police PRO, ASP Godwin Ahianyo, noted the pastor was nabbed again for flouting the directive earlier on Sunday.

Churches and Mosques all over the country have largely complied with the directive of the President to ban public gatherings.

Several churches over the week have held online services with others holding live services on radio and television stations.

President Akufo Addo in an address to the Nation on Saturday, March 21, 2020, announced some additional measures adopted by government to combat the pandemic which has so far infected 21 and killed one person in Ghana.

As part of the measures, Ghana is to close all its borders from today, Sunday, March 22.

The border closure is to last for two weeks according to President Nana Akufo-Addo and “will not apply to goods, supplies and cargo.”

“All our borders; by land, sea and air, will be closed to human traffic for the next two weeks beginning midnight on Sunday,” he said in an address to the Nation on Saturday evening.

President Akufo-Addo said the government’s aim with all its measures are to “limit and stop the importation of the virus; contain its spread; provide adequate care for the sick; limit the impact of the virus on social and economic life and inspire the expansion of our domestic capability and deepen our self-reliance.”

Following restrictions from recently reviewed travel protocols, the only admissible travellers into Ghana were Ghanaians and foreign nationals with residence permits in Ghana.

But ahead of the closure, this category of travellers will be subject to a mandatory quarantine.

He also said that all persons who may have come into contact with any patient who tested positive will also be tested for the virus.

According to him, this forms part of measures to improve the contact-tracing process and make it easier and more effective to tackle the outbreak in the country.

He also stated that more personal equipment is being procured for the frontline workers as 50,000 test kits have already been ordered.