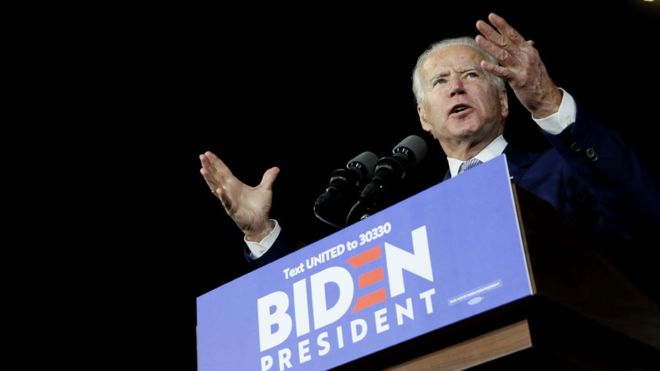 Joe Biden has won nine of the 14 states that voted to pick a Democratic White House candidate on Super Tuesday, a remarkable rebound for his campaign.

But Bernie Sanders is projected to win California – the biggest prize of the night – as well as three other states.

They lead the race to face Republican President Donald Trump in November.

Former New York mayor Michael Bloomberg spent more than half a billion dollars of his own money on his campaign, but did not win a single state.

Super Tuesday awards more than 1,300 of the 1,991 delegates needed to clinch the Democratic White House nomination in July. As things stand, Mr Biden has 396 delegates and Mr Sanders 314.

How important is Biden’s performance?

Virginia and North Carolina are crucial because they are key swing states in the 2020 election.

Exit poll data across the board suggests Mr Biden has attracted large majorities of African-American voters, a crucial bloc for the Democratic party.

Mr Biden also appears to have won among the type of suburban voters who pollsters say have been turning away from the current US president.

“We are very much alive,” Mr Biden told a crowd in Los Angeles. “Make no mistake about it, this campaign will send Donald Trump packing.”

How is Sanders doing?

If Mr Sanders does win California, as the Associated Press news agency projects, he will pick up the lion’s share of the whopping 415 delegates that the Golden State sends to the party convention.
The left-wing senator also won his home state of Vermont, along with Colorado and Utah.

The second biggest voting state of the night was Texas. Mr Sanders had been heavily favoured to win the Lone Star State, but it was narrowly taken by Mr Biden.

“We’re taking on the political establishment,” he said. “You cannot beat Trump with the same-old, same-old kind of politics.”

How did Biden bounce back?

Joe Biden came into Super Tuesday hoping his momentum from a surprisingly big South Carolina win would translate into a strong showing in some of the Super Tuesday states and allow him to keep within sight of Bernie Sanders in the delegate count.

By that metric, his evening succeeded beyond his best expectations.

His support among black voters, which was on display in South Carolina, was replicated across the South and helped offset Bernie Sanders’ strength with Hispanic voters in Texas.

The endorsements mattered too – in Dallas on Monday, he had the support of Amy Klobuchar, Pete Buttigieg and Beto O’Rourke, and he ended up greatly over-performing his polls in that state and winning Klobuchar’s Minnesota.

But now the hard work begins. He is in for a state-by-state slog against Mr Sanders that could stretch all the way to the Democratic National Convention in July.

He’ll have to fundraise and organise rapidly to make up for the Vermont senator’s advantages. Meanwhile, Republicans are going to start training their fire on him – again.

If he ends up winning the nomination, after being left for dead just a few weeks ago, he will have earned it.

How did Bloomberg and Warren do?

Senator Elizabeth Warren, once the frontrunner in the race, suffered a humiliating defeat to Mr Biden in her home state of Massachusetts.

Mr Bloomberg could only pick up a consolation win in the tiny US territory of American Samoa.

He has, however, garnered enough votes in California and Texas to pick up delegates, according to incomplete results.

Mr Bloomberg was appearing on a presidential ballot for the first time after skipping all four contests last month.

The billionaire wildcard had lowered expectations for his performance ahead of Tuesday. But on the eve of the vote, he indicated he plans to fight all the way to the party convention in Milwaukee, Wisconsin, in July.

Mr Trump could not resist taking repeated digs at his rival New York billionaire after his disappointing results.

The Democratic party is at a crossroads as its voters decide which candidate has the best chance of denying Mr Trump a second term in office this autumn.

Once a crowded field of more than two dozen, celebrated for its women and candidates of colour, the Democratic contest now increasingly looks like a two-man race between two white male septuagenarians.

The former vice-president presents himself as an electable pragmatist who will bring incremental change and restore “decency” after the Trump presidency.

But critics say his campaign is uninspiring, and that he brings too much political baggage from his lifelong career as a Washington insider.

The 78-year-old is planning to transform the American economy with a multi-trillion dollar, higher taxation blueprint on everything from healthcare to education.