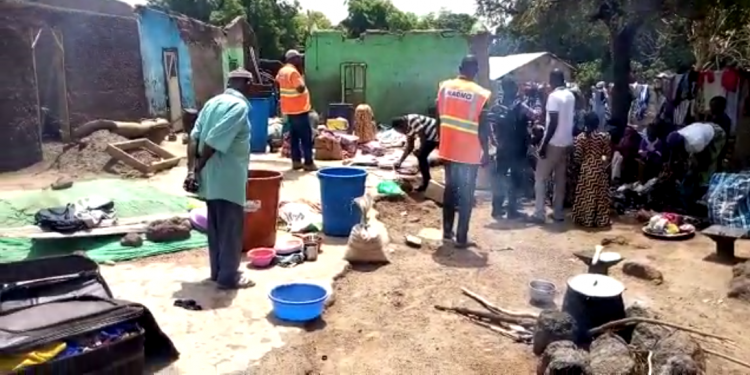 Some residents of Bimbilla are calling on government to come to their aid following the damage caused to their properties by last Sunday’s rainstorm.

The victims of the heavy downpour had their roofs ripped off and other properties also destroyed.

In an interview with Citi News, the residents appealed government’s assistance to help restore them to their original state.

“My two rooms were ripped off, in fact, as it happened there was no help, no one came to our aid. I am unemployed, I am not doing anything so I have to borrow money from somewhere to cover it so we can get a place to lay our heads. So we are pleading with the government to come to our aid. Most of the houses have still not been roofed and you know we are poor and even coupled with this virus that came, we cannot do anything”.

“We are pleading with the people that they should come and help us because we are staying with children and right now we don’t know where to go to, we are just roaming around so we really need help”.

Hundreds displaced by rainstorm in Bimbilla

Hundreds of people were rendered homeless by a rainstorm in Bimbilla in the Nanumba North Municipality of the Northern Region on Sunday.

The rain, which started around 3 pm on Saturday 21st March 2020, ripped off the roofs of several homes, schools, hospital staff bungalows and destroyed foodstuffs, electric poles and church buildings.

Many people are counting their loses as they no longer have places to lay their heads.

In an interview with Citi News, some of the affected people said they had to seek refuge elsewhere.

“Now, we are living in someone’s house. All our things have been destroyed. Some of the clothes are even wet. We don’t know what to do. We are pleading with the government to come and help us,” one lady said.

The Municipal Chief Executive for Nanumba North, Abdulai Yaqoub, who visited the area, said he is collaborating with the National Disaster Management Organisation (NADMO) to bring relief to the people.