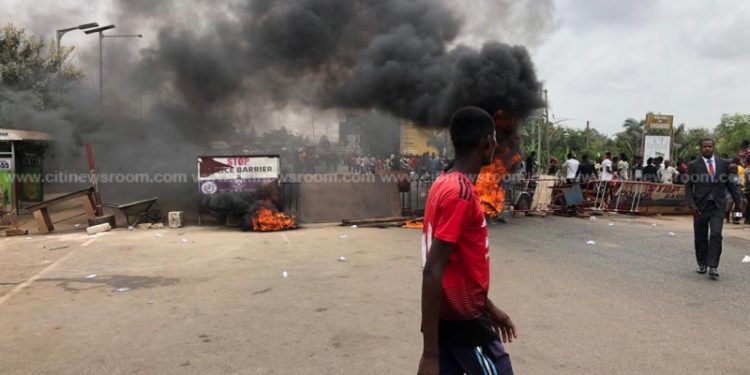 The Bureau of Public Safety has condemned the violence perpetrated by the youth in Sogakope which led to unrest in the town this week.

Following the killing of the assemblyman for the area, Mawutor Adzahli, the angry youth went on a rampage, blocking the main Aflao- Accra road and attacked the Sogakope police station.

Bounties amounting to GH₵60,000 have been raised for anyone with information that will lead to the arrest of the culprits.

While condemning the youth, the Executive Secretary of the Bureau of Public Safety, Nana Yaw Akwada, also urged the police to work at improving their community relations to prevent such mistrust that normally characterizes such actions.

“Under no circumstance should police come under violent attack. That said, we indicated that what happened at Sogakope is also as a result of long term inaction by the police. By inaction, we are saying long term lack of proper accountability to the citizens leading to the demonstration of a complete lack of confidence in the police. The police must up their game in order to court the confidence and trust of the citizenry,” he said.

Marcus Mawutor Adzahli who is also a mobile money vendor was shot dead on Sunday, March 1, 2020, at his residence in Sogakope.

On the back of this, the residents have in various ways, expressed their displeasure by blocking the Aflao-Accra road at the end of the Lower Volta bridge at Sogakope.

They also raided the police station in the town with claims that the police lack urgency when tackling crime.

According to them, when the assemblyman’s house was invaded, the police were called but took over 30 minutes to arrive at the scene, making it too late to save the assemblyman and his family.

But the Volta Regional Police Command has refuted claims that its personnel failed to respond to distress call during the killing of the Sogakope South assemblyman, Marcus Mawutor Adzahli.

It rather said it will investigate claims by residents of Sogakope that police in the area have been negligent amid a purported increase in violent crimes.

Police officers had to fire warning shots to disperse the protestors who had besieged the police station.

The police opened fire after protestors started pelting stones at the officers, shooting some of the protestors in the process.

Meanwhile, the District Chief Executive of the South Tongu local assembly, Emmanuel Luis Agamah has put a GH¢10,000 bounty on the heads of perpetrators involved in the murder of the Assemblyman.

The latest addition comes from some Members of Parliament of the National Democratic Congress in the Volta Region, laying down a bounty of GH¢15,000, as well as another GH¢10,000 from Bright Ahu, the South Tongu NDC Vice Chairman, adding up to the previous amounts to make GH¢60,000 to be given to anyone who will help find the killers of the assemblyman.

The Bureau of Public Safety had earlier called for the establishment of an independent police complaints body to receive and act upon issues regarding police misconduct.

According to the Bureau, this will help restore public confidence in the police.

In a statement after series of public incidents that highlights a trend of mutual disrespect for rights and freedoms between citizens and the police, the Bureau said if the problem is not “addressed with urgency, public tranquillity and law and order will grind to a complete halt thereby threatening our democratic development.”

Alex Mould writes: Stop sleepwalking, you’re tripping so many times for your 63 years