Coronavirus: Returnee from UK, one other quarantined at Bongo 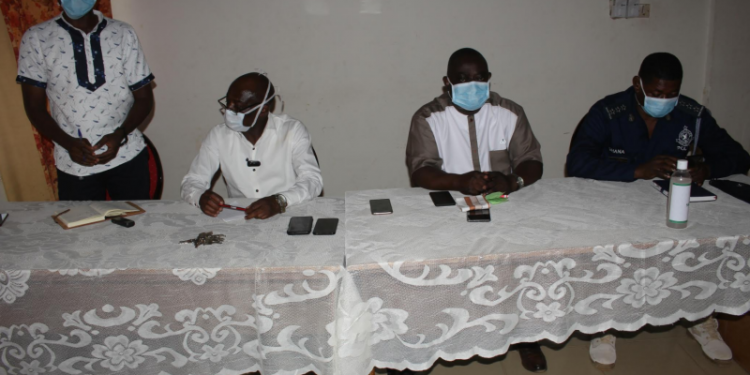 A 45-year-old Ghanaian based in the UK from Zorko in the Bongo District of the Upper East Region has been quarantined in Bongo.

The man, Moses Aniah, until his departure to Ghana on Saturday, March 21, 2020, had spent two years in the UK, three months in India and a day in Dubai.

He was picked up immediately he arrived at home by the Bongo District COVID-19 team together with his friend, Baba Asarawiah, age 25, who had accompanied him from Kumasi to Bongo-Zorko.

The two have been quarantined on the suspicion that they could be infected with COVID-19.

Speaking at a press conference in Bongo, the District Director of Health, Stephen Bordotsiah said the two are being quarantined in a safe and isolated place and that their specimens have been taken and dispatched to Kumasi for testing.

He explained that they had a tip-off about the two travelling from Accra to Bolgatanga and having had intelligence that Moses Aniah had come into the country and wasn’t quarantined, there was the need to quarantine him together with his friend Baba Asarawiah.

“They boarded a tricycle (Cando) with three other persons to their house in Zorko before the health team picked them up.  And everybody who has been in touch with them is in self-isolation. We are tracing the rider of the tricycle they came with. One other person whom we have contacted is currently in self-isolation but one Burkina Faso lady who was also on board entered Burkina Faso and cannot be traced.”

“We are also following up to the O.A station for details of all passengers on the bus they came with for contact tracing. Samples of the two have been sent to Kumasi for testing and hopefully by close of day tomorrow Friday, March 27, 2020 the results will be out. But even if they test negative, they will still be quarantined for the mandatory 14 days before they are discharged.”

Mr. Bordotsiah disclosed that the two who are on strict monitoring are doing well and have shown no symptoms of COVID-19.

Chairman of the Bongo District Security committee and DCE, Peter Ayinbisa allayed fears of COVID-19 spread in the district as speculated on social media.

“The two young men have not been tested and confirmed of COVID-19 as being circulated on social media and some other media platforms alleging that the Bongo District has recorded two cases. That is not true because nobody has been tested and confirmed positive of COVID-19. The health team is working very hard across the district to ensure that we prevent anybody carrying the virus from entering our district.”

“I want to assure the people of Bongo that there is no cause for alarm. The health team is prepared amidst some logistical challenges to ensure that everybody who comes to any facility goes through the preventive protocols before they can access services.”