Security Analyst Colonel Festus Aboagye, who is under mandatory quarantine after landing in the country three days ago, says the government is failing to provide them with necessary information as to the conditions with which they are to live in isolation.

After President Nana Akufo-Addo announced that the government will begin a mandatory quarantine of all travellers arriving in Ghana, this directive was immediately put into action with military personnel escorting all travellers who landed at the Kotoka International Airport to various hotels to observe a 14-day isolation period to test for the virus.

Currently, the total number of persons under the mandatory quarantine stands at 1,030. Out of this number, 38 have tested positive for the virus so far.

Speaking on Eyewitness News on Tuesday, Colonel Aboagye, who has had his sample taken and awaiting results bemoaned the communication blackout from the government or any official.

“In terms of the quarantine plans, procedures and protocols, the biggest issue from my perspective is the information blackout. I did my swap yesterday. About 24 hours later, nobody has found it necessary and decent to inform me about the progress with my sample. That information management aspect is part of the wellbeing of the individual, our families and friends. Nobody seems to be paying attention. It’s as if we owe it a duty to the state to just keep quiet and sit at the hotel,” he lamented.

He continued, “My issue is what I keep emphasizing. The government owes it as a duty to keep us informed. We are human beings. So if you tell us what is happening, that is part of managing the kind of anxiety that we talk about. But you sit in your hotel room for 24 hours and nobody is telling you anything. It’s as if they are doing you a favour. Nobody is doing me a favour by quarantining me. I want the state to understand that.”

Some Ghanaians who have also been kept in mandatory quarantine also raised the same concerns.

One of them, Kwame, who touched down from Ethiopia days ago had no knowledge of when he will be tested as at when he was speaking to Citi News on Monday.

He noted that since he was sent to the hotel, no official had come to offer him any information as to what was going on.

“Generally, the atmosphere is okay. But my reservation is just with the lack of information. There is a need for them to engage us and tell us what we are about. How many days will be spending in quarantine? Because our families will be expecting us at home. There is a need for us to communicate with them as well. I would like to commend the government for the step in curtailing the spread of this pandemic. Government has attached much importance to this. But at least information is all we want,” he lamented.

As at Wednesday morning [March 25], the total case count of the coronavirus in Ghana was 68, with two deaths.

15 new cases of the virus were confirmed in the morning.

The number is made up of 12 persons who were part of others mandatorily quarantined by the government and three other persons already in the country.

“The sudden spike in case incidence is as a result of the mandatory quarantine and compulsory testing for all travellers entering Ghana, as directed by the President,” the Ghana Health Service reported. 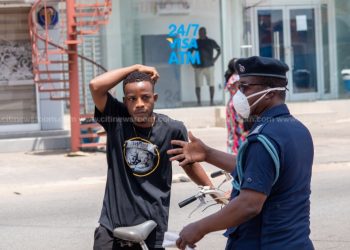