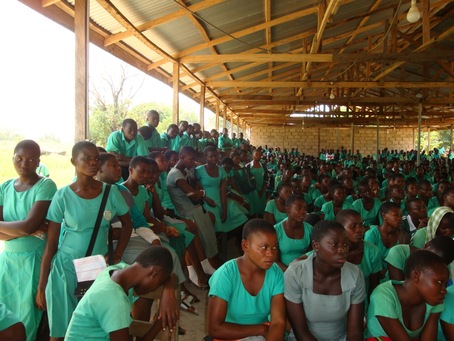 The purpose of this article is to outline the relationship between education and the world of work as often worded in “demand and supply of skills”. The problem has always been seen as a “skill gap” or “skill mismatch” leading to employers complaining of skill shortages while at the same time graduates coming out of our institutions of learning and training tagged as not having the required skills and therefore not employable.

I am looking at the problem in the context of Technical and Vocational Education and Training (TVET) within the General Education and Training system because the TVET institutions are located at the pre-tertiary level of the educational system and compete unfavourably for students from the first cycle exiting through the Basic Education Certificate Examination (BECE), the first external examination from the first cycle institutions.

What is noticeable about this context is that the TVET system is small, weak and has coordination and resource challenges. I then bring to the fore the policy of Free Senior High School (SHS) by government and its implications and finally draw up my concluding statements.

Formal education means different things to different people, some for self-fulfilment, others to be able to contribute to society’s advancement by contributing to political debates while others look out for tangible rewards in the labour market.

Human Capital Theory looks at the relationship between education and work and argues that investment in human capital will lead to greater economic output and productivity. The theory further argued that individuals receive higher wages equivalent to their marginal produce – a direct result of their investment in human capital under the assumption that wages reflect differences in individuals’ productivity.

To proponents of Human Capital Theory and its tenets, it is a major theory that explains this relationship. There is a firm belief that the individual’s investment in education is a rational choice that will yield a positive return in the labour market as a simple direct relationship that allows for generalization and therefore very useful to policy makers to make a causal assessment.

The claim that individuals’ lack of skills is the primary determinant of their unemployment and the fact that resolving a ‘mismatch’ between education and work will solve the problem of graduate unemployment cannot be entirely factual.

On the contrary, it is a continuous changing of the structure of the labour market as well as a broader social policy that determines the quality of vocational and professional education. In support of his claim, Mark Levine drew our attention to the period of the great depression when aggregate demand and the country’s job creation machinery had collapsed and therefore workers were described as unadoptable and untrained and do not match up to industry’s skill demand.

The skills of the same group of workers became relevant and employable a few years later just before the Second World War when the economy was given a massive boost, the “skills gap” vanished.

Critics of the Human Capital Theory think that the value of education in relation to economic development has been overrated because demand and supply of skills do not work mechanically to attain an equilibrium, the rate of returns changes over time as the labour market and education are equally changing.

An advanced reason for this is also because when the labour market gets saturated returns begin to decrease stimulating further heights in education attainment with active participation of the state. The correlation between education and lifetime earnings certainly exist, but this does not in itself prove that a person’s level of education determines their level of earnings.

An institutional overview of Ghana’s educational system turns out to have a Technical and Vocational Education and Training System that is small, deprived and weak and has been reviewed many times, but has not really improved within the context of an education system that has been growing and developing, with increasing enrolments at the upper secondary level and increasing university enrolments.

The free SHS policy can only aggravate the current imbalance as the policy does not cover the entire TVET but just a few under Ghana Education Service and further decrease earnings and opportunities of the majority of graduates in the labour market.

It is likely to further widen the inequality gap between the poor and the rich and escalate youth unemployment in an economy which is not expanding at the rate of its population growth.

The state’s investment in such a programme could be considered as a capital investment by proponents of Human Capital Theory but to some critics of the theory, it’s simply an investment in consumption since there is no guarantee of the investment leading to a proportional increase in production and economic development.

Enrolments in magnitudes as observed in recent times after the introduction of the free SHS policy could best be described as “trading earth for heaven” or putting the cart before the horse.

The government needs a clear and practical industrial policy to properly link training and skills development to economic growth.

To conclude, it is not as though it is wrong to invest in the education of Ghanaians in a policy like free SHS as there is some consensus from all sides of the debate that the state has a role to play as a contribution to economic growth through its investment in skills development but the assumption of equating human beings as a factor of production is problematic.

The moral issue is supported by the policy as the vulnerable in society share in the national cake by giving them the opportunity to have secondary education. I do not intend to raise issues of quality vs quantity in this article. It is equally true that “free” things encourage laziness and lack of responsibility.

We must convince ourselves of the validity of the manifest and the latent functions of education and reconsider investment in TVET which has the potential to bridge the skill gap of a country of about 90 percent informality anticipating to industrialize. Part of the necessary ingredient is to radically expand the economy to create the expected jobs.

We cannot invest in free Senior High School Education in isolation without a radical expansion of strategic sectors of the economy to respond to youth unemployment in the medium to long term.

Efforts made in this regard in the agricultural sector, for example, could be described as “unreliable” as agriculture is still rain-fed. Only one percent of agricultural lands is under irrigation and with the ensuing advent of climate change, your guess is as close as mine.