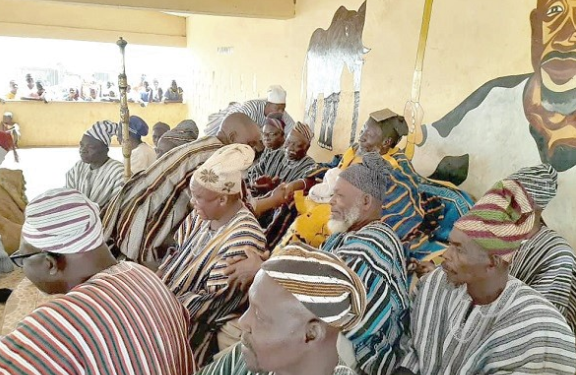 The overlord of the Mamprugu Traditional Council, Nayiri Naa Bohugu, Mahami Abdullai Sheriga II has suspended all traditional activities including enskinment of sub-chiefs as well as funerals in his Kingdom due to the coronavirus pandemic.

The overlord has, therefore, directed the North East Regional Security Council (REGSEC) to deal ruthlessly with anyone found violating the president’s directive on measures taken to stop the spread of the coronavirus in the country.

At a press briefing today, Thursday, March 26, 2020, at his palace, the chief said even birthdays and political party rallies are banned henceforth.

“I wish to state categorically that this Kingdom respects the directive and fully endorses its implementation and all other social gatherings including birthday parties, funerals, political party gatherings are banned. The social distancing of two metres has to be adhered to and I have instructed my elders to comply with even in the palace. I have also suspended all enskinment in the Kingdom. I have also directed the REGSEC to deal ruthlessly with any individual or group of persons found culpable of this directive.”

The government has banned all public gatherings including conferences, workshops, funerals, festivals, political rallies, church activities, and other related events as part of measures to stop the spread of coronavirus in the country.

President Nana Akufo-Addo in a national address on Sunday [March 15, 2020] said the ban will be in force for the next four weeks.

He said private burials are allowed but should just be for a few people.

“Private burials are permitted, but with limited numbers, not exceeding twenty-five (25) in attendance.

A total of 132 persons have so far been confirmed to have been infected with the Coronavirus disease in Ghana.

This comes after 64 new positive cases were announced by the Ghana Health Service on Thursday, March 26, 2020.

Of the 64 new cases, 40 were confirmed among those under mandatory quarantine while the 20 others were confirmed through the Ghana Health Service’s regular surveillance systems of the population.

Authorities say all the new patients have been isolated and are receiving treatment.