After spending millions on his own campaign, Michael Bloomberg is dropping out of the 2020 presidential race.

“Three months ago, I entered the race for president to defeat Donald Trump. Today, I am leaving the race for the same reason,” he said in a statement.

Mr Bloomberg, a former mayor of New York City, spent at least $409m (£313m) of his own money in the race to become the Democratic Party’s nominee.

He said he would now support former Vice-President Joe Biden.

“I’ve always believed that defeating Donald Trump starts with uniting behind the candidate with the best shot to do it. After yesterday’s vote, it is clear that candidate is my friend and a great American, Joe Biden,” Mr Bloomberg said in his statement.

He spent $409m up to the end of January, according to filings with the Federal Election Commission, but is believed to have also spent heavily during February ahead of Super Tuesday.

Out of the 14 states and territories which voted on Tuesday, the billionaire only managed to win in American Samoa.

Joe Biden won 10 of the states, a remarkable rebound for his campaign.

The former US vice-president overturned predictions to narrowly take the key state of Texas from his main challenger, Bernie Sanders.

However, Mr Sanders is projected to win California – the biggest prize of the night – as well as three other states.

They lead the race to face Republican President Donald Trump in November. 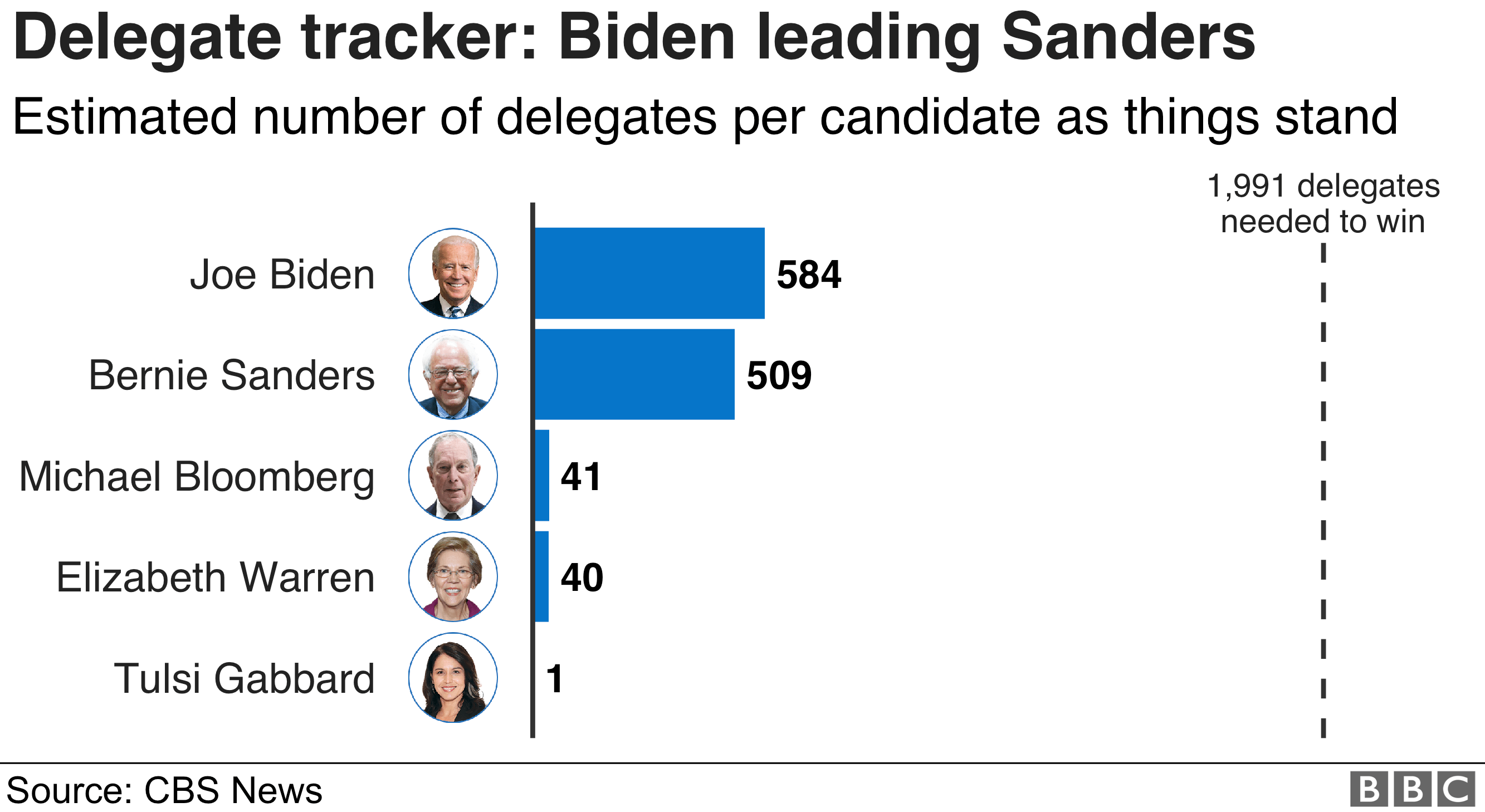 Where did it go wrong?

1) While most of the candidates in the race were liked by Democrats, Bloomberg was underwater. In Virginia, for instance, 56% of primary voters viewed him unfavourably. Hundreds of millions of dollars in slick television adverts and glossy mailers won’t do any good if voters don’t trust you.

2) Bloomberg spent $34m in television and radio advertisements in Alabama, North Carolina and Virginia, while Biden spent a fraction of that amount – and won all three. The early warning signs – empty campaign offices, sparsely attended voter canvassing events – turned out to be harbingers of doom.

3) He was surging in the polls just a few weeks ago. Then the Las Vegas debate, and his evisceration at the hands of Elizabeth Warren, happened. While many of the debates this campaign have had negligible effects, that one mattered. 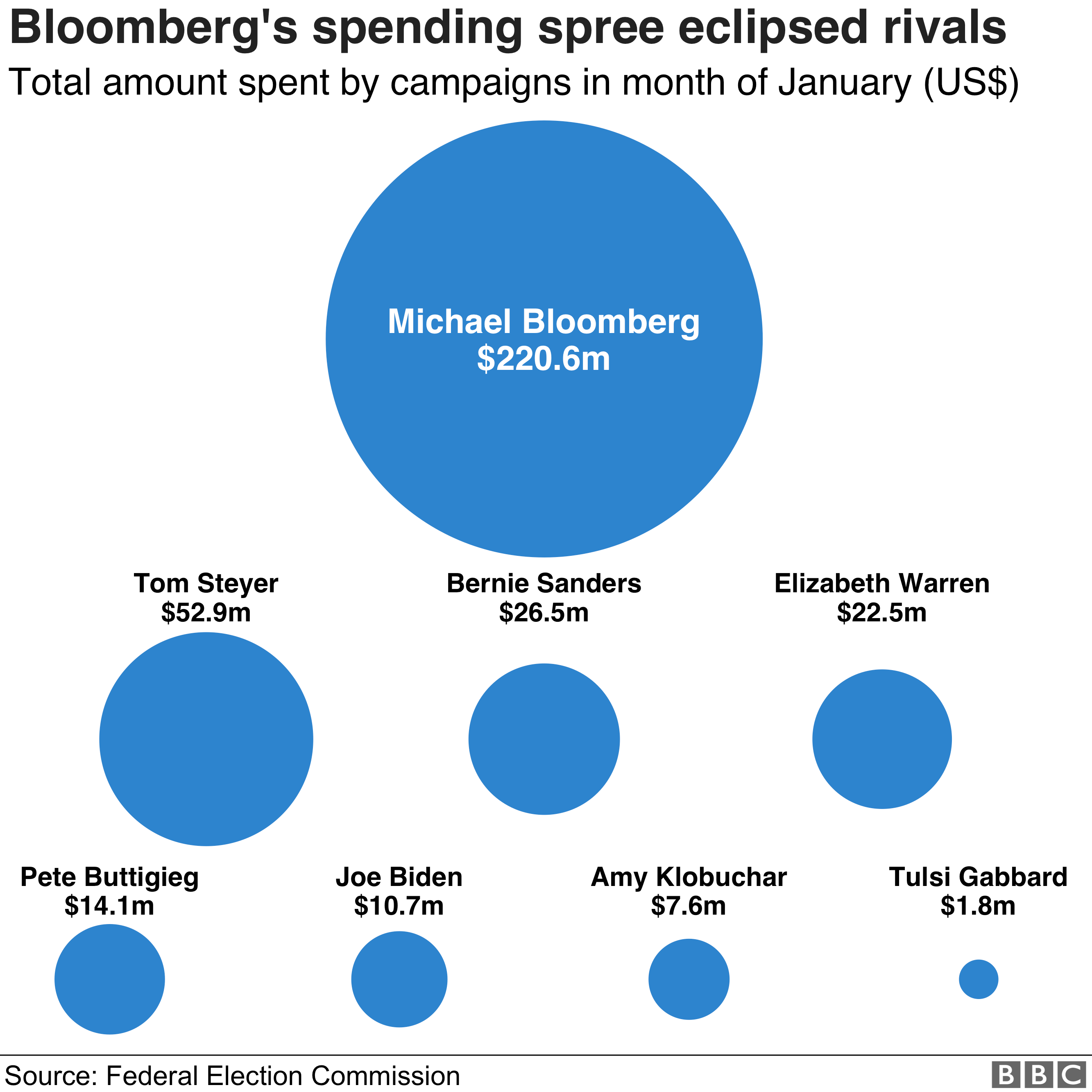 What happens with the Democratic race now?

Super Tuesday awards more than 1,300 of the 1,991 delegates needed to win the Democratic White House nomination in July.

Mr Biden is on course to pick up 584 delegates, Mr Sanders 509 and Ms Warren 40, according to the BBC’s US partner, CBS News.

But full results from California, which has 415 delegates, could change that.

Senator Elizabeth Warren, once the frontrunner in the race, suffered a humiliating defeat to Mr Biden in her home state of Massachusetts.

She was talking to her team to assess her next step, a campaign aide said on Wednesday.

The next primaries take place on 10 March in Michigan, Washington state, Idaho, Mississippi, Missouri and North Dakota, with 352 delegates available.

The front-runners are hoping to clinch the nomination before the Democratic convention in July.

The party is at a crossroads as its voters decide which candidate has the best chance of denying Mr Trump a second term in office this autumn.

Once a crowded field of more than two dozen, celebrated for its women and candidates of colour, the Democratic contest now increasingly looks like a two-man race between two white male septuagenarians.

The former vice-president presents himself as an electable pragmatist who will bring incremental change and restore “decency” after the Trump presidency.

But critics say his campaign is uninspiring, and that he brings too much political baggage from his lifelong career as a Washington insider.

He is planning to transform the American economy with a multi-trillion dollar, higher taxation blueprint covering everything from healthcare to education.

Citi FM, Citi TV to hold ‘Back to Your Village Food Bazaar’ on March 14