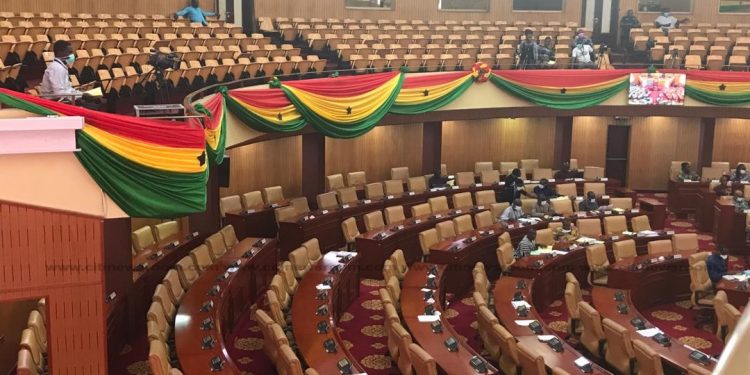 The Minority side of Parliament was empty during sitting today, Saturday, March 28, 2020.

The only Minority Member who showed up,  Member of Parliament for Kumbungu, Ras Mubarak, did not catch the eye of the Speaker when he stood up.

He then left the chamber noting that should the Finance Minister present any emergency budget to fight the pandemic, his side of the house will have availed themselves.

Ras Mubarak in an interview with Citi News justified the Minority’s boycott of the sitting.

“We the minority are ready to debate and proffer solutions on the stimulus package that is scheduled to come before Parliament. And since that is not happening today, in conformity with the team spirit, there is no need for me to leave. Because the Finance Minister is not coming, we have indicated that we don’t want to be part of the processes on Saturday.”

Speaking on the floor, Dominic Nitiwul described the boycott of the Minority as unpatriotic.

“Mr. Speaker, as a house and as a country, if the absence of my colleagues really comes to pass, that this very important national exercise we do not come and we do not make a single comment on this floor then Mr. Speaker, we as a Parliament are letting the nation down. Mr. Speaker everywhere around the world, nations are coming together to fight this Coronavirus.

The Minority Leader, Haruna Iddrisu, last week argued that his side of the house will not be able to attend sitting on Saturdays as working overtime amidst the COVID-19 scare can weaken their immune system.

Meanwhile, the Majority leader, Osei Kyei Mensah-Bonsu said he was not informed about why the Minority failed to show up.