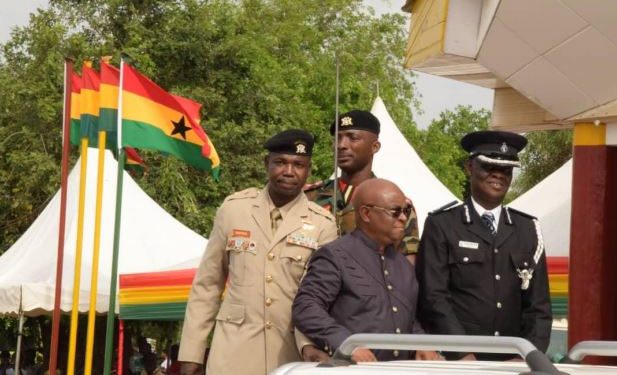 The Volta Regional Coordinating Council (RCC) has described as misleading, media reports suggesting that the celebration of the 63rd Independence Day in the regional capital Ho, was marked without Ghana flag.

According to the Council, a number of Ghana flag was hoisted at various vantage points within the town and on the parade ground at Jubilee Park, Ho on Friday March 6, 2020, and were only removed after
the programme had ended.

Some media reports have claimed that Ghana flag which forms a major part of Ghana’s independence anniversary celebration were absent in Ho although flags of the various security services, some schools and institutions flew at full mast at the parade grounds.

But in a statement, the RCC indicated that the inaccurate reportage smacked of malice aimed at dragging the name of the Council into disrepute after a well-organised event.

“We wish to unequivocally state for the records that the particular misleading news was twisted and
aimed at tarnishing the hard-earned reputation of the Regional Coordinating Council under the auspices of the Hon. Regional Minister and the organizers.”

“For the avoidance of doubt, we want to reiterate the fact that the publication is inaccurate, malicious and misleading since the commemoration of our national independence across the country over the years has always been held at a central converging point where everyone including our Security Agencies, School Children, Heads of Department, Market Women and Opinion Leaders amongst many others gather to commemorate our independence from British Colonial rule some 63 years ago”, portions of the statement added.

While condemning the media outlets for what they describe as a poor job, the council extended a hand of appreciation to all who made the independence day parade a success.

“What took place at the Jubilee Park in Ho [on Friday] was not an exception and for media outlets of such repute to carry out misleading information to the public is most unfortunate and must be condemned and disregarded by all well-meaning Ghanaians in no uncertain terms.”

The statement concluded saying: “It is rather unfortunate that the publication has taken the shine from an otherwise successful event and judging by the very high standards they [media houses] have set for themselves over the years in news reportage ought to have been at the forefront in providing accurate news to the public instead of seeking to engage in misleading headlines for the sake of cheap propaganda so as to satisfy some selfish parochial interest.”