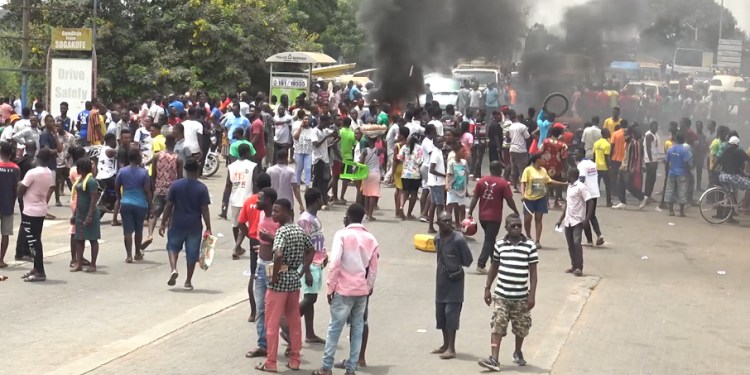 Some persons who were hit by stray bullets during a violent protest at Sogakope on Monday are responding to treatment.

The Volta Regional Public Relations Officer of the Ghana Police Service, Corporal Prince Dogbatse in an interview on Eyewitness News said three persons were hit by stray bullets and “they are currently receiving medical care. They are fine.”

The victims were among dozens of youth who besieged the Sogakope police station to protest over the murder of the Assemblyman for the area.

They pelted stones at the Sogakope police station. Officers at the station in a bid to disperse the irate youth also fired gunshots.

Prior to storming the police station, the youth also blocked the main Sogakope road that links Accra to the Volta Region.

Their action was amidst the burning of vehicle tyres thus causing vehicular traffic on the stretch.

They were later dispersed by personnel from the Ghana Armed Forces and the Formed Police Unit.

Corporal Dogbatse said the support team of security personnel are assisting in providing security while investigations into the murder of the assemblyman continue.

“This is rather taking attention from the main issue that we have. We will urge the youth to be circumspect in their behaviour,” he advised.

He further urged the youth to exercise restraint and use the appropriate forum to air their grievances concerning the murder.

“You cannot go on rampage for no particular reason. The best way to express your dissatisfaction about the professionalism of a state institution is not to go on a rampage to cause damage to state property…We need their support. If they have any information, that is what we need from them. They must be responsible in their behaviour,” he added.

“Someone’s life is lost and we are looking for people who committed this dastardly act and put them to justice we need them to support our cause,” Corporal Prince Dogbatse further stated.

Marcus Adzahli, the assemblyman for Sogakope south electoral area, who doubles as a mobile money merchant, was shot and killed at his residence early on Sunday morning.

The assailants reportedly stormed the victim’s house whilst firing gunshots.

His wife and child were also said to be in a critical condition at the District hospital.

The District Chief Executive (DCE) of the South Tongu local assembly in the Volta Region, Emmanuel Luis Agamah has put a GHS10,000 bounty on the heads of perpetrators involved in the murder of an Assemblyman for the Sogakope South Electoral Area, Marcus Mawutor Adzahli.