Two months of complete lockdown, so far, so good [Article] 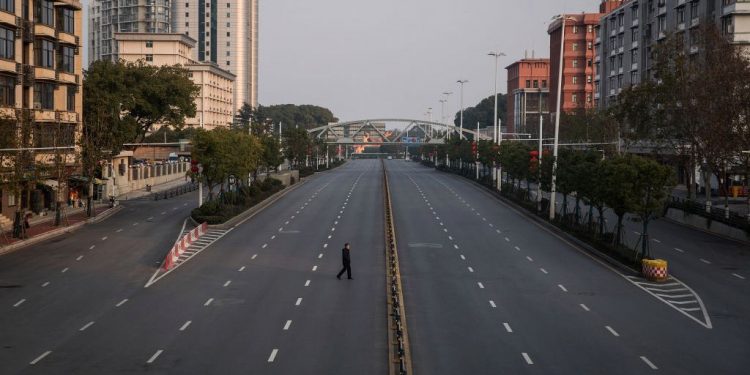 WUHAN, CHINA - FEBRUARY 03: (CHINA OUT) A man cross an empty highway road on February 3, 2020 in Wuhan, Hubei province, China. The number of those who have died from the Wuhan coronavirus, known as 2019-nCoV, in China climbed to 361 and cases have been reported in other countries including the United States, Canada, Australia, Japan, South Korea, India, the United Kingdom, Germany, France, and several others. (Photo by Getty Images)

Today, 23rd March 2020 is exactly two months since authorities in Central China city of Wuhan in Hubei Province announced a lockdown on 23rd January 2020. When the lockdown was announced, many of us were wondering how we are going to survive under such conditions. Lo and behold, we have already spent 60 days in the lockdown (staying indoors). During this period, I had the opportunity to go out of my hostel only twice on permission. This happened in the first week of the lockdown and first week of February by which time it was possible to go out of the students’ hostel to buy foodstuffs from the neighbourhood on condition that one was in a nose mask.

Public transport such as buses, metro trains, flights and taxes were withdrawn by 10 am. By the following week, the restrictions became tighter, so the few stores that were operating half-day during the Chinese New Year started closing down. This was the point panic buying of goods like foodstuffs, nose masks, hand sanitizers etc began because one could only access what were available in the next store or supermarket near you. Initially, there were shortages of basic necessities such as nose masks, hand sanitizers, food supplies in Wuhan so the city authorities had to appeal to the central government to assist them with 40 million face masks and 5 million protective gowns to meet the demand. So, we also experienced shortages of basic necessities during the first two weeks of the lockdown, so prices of available items started going up but thankfully, the Chinese government stepped in to ensure that less affected areas in China stepped up production and the government made sure that supply of basic necessities was enough in Wuhan and Hubei Province till date. Two weeks ago, China even increased the production of nose masks to 116 million per day just to ensure that shortages do not occur any longer.

The lockdown really helped the Chinese government to control the widespread of the virus to every nook and cranny of the country. However, it is important to note that, for a complete lockdown to be impactful and effective, both the government/state and the citizens all have big roles to play. The authorities must, first of all, ensure the availability of essential services. For instance, there must be reliable potable water supply, there must be a reliable supply of electricity, foodstuffs, places of convenience, accessible information and tips to guide the people while staying indoors among others. Putting in place these measures are important and pre-requisite in lockdown to ensure compliance because a complete lockdown cannot happen in a vacuum. For a complete lockdown to effectively work, the citizens also need to comply fully with the control or containment measures rolled out by the authorities. But compliance and adherence to preventive measures would become a big problem if the people in the lockdown areas do not have access to the aforementioned basic necessities or services. The absence of basic essentials would likely push the people to agitate and some will ultimately defy the containment rules or protocols.

Life certainly in the lockdown is unpalatable because it’s like living under house arrest or a semi prison of sort. It is very stressful and difficult to cope with but if it has to be done to protect the lives of the people or the masses, why not. Therefore, the only option under such a lockdown situation is cooperation, compliance and adherence. Citizens cooperation, compliance and adherence to the lockdown conditions in Wuhan and many other parts of China greatly helped the Chinese government to do effective rapid detection, isolation and quarantine of people who were either confirmed or suspected to have the virus. The situation would have been a different thing today if this lockdown had not taken place. On hindsight, I think the lockdown was the best remedy in controlling the fast spread of the virus infection. During the 60 days lockdown and counting, people are not able to go to work except those who provide essential services like health workers, security and those supplying basic necessities to the communities, residential areas, hospitals and schools. Right now, school is in session across China but everyone is home except those of us who are international students who are studying in our hostels. Classes take place via online platforms. Laboratory discussions and meetings all take place via online platforms. Here in China, over 10 million senior students are preparing to right college entrance exams in 74 days from today. This was announced by the Chinese Ministry of Education on 17th March 2020. The ministry further indicated that schools are not reopening until the outbreak is under control. What also helped in the provision of essential services was online delivery services during the lockdown. But as the lockdown became intensified along the line, online purchasing and door-to-door delivery services were also affected and the number of online shopping services that could do door-to-door delivery was drastically reduced to only a few companies within Wuhan. At this point, the Chinese govt boosted the supply of food. Our universities also did a great job in terms of the supply of since it became impossible to steep out of the main gate of students’ hostel. The govt of Ghana also came in along the line to support Ghanaians in Hubei and other parts of China especially students with some foodstuffs and money through the Ghana Mission in Beijing just like many other countries did for their compatriots here in Wuhan. Many individuals, friends and family relations from all over the world continue to reach out to me ever since, I am sincerely grateful to you all for your support and prayers. All these gestures are well appreciated. Stimulus packages should be extended to companies by governments that have the capacities to produce basic necessities under Covid19 and a lockdown situation such hand sanitizers, face and nose masks, foods etc as was done here by the Chinese government.

To effectively confront #Covid19, the Chinese government mobilized 42,000 doctors and nurses with a total of 34 medical teams from other parts of China to Wuhan and the Hubei Province. I provided the breakdown of the 42,000 health workers Chinese government assembled to fight #Covid19 last week in one of my Facebook posts, so I do not wish to repeat those statistics. The health workers did a fantastic job and deserve so much commendation from all especially those of us in Wuhan and Hubei and China as a whole. The Chinese government demonstrated strong leadership and commitment resulting in the containment of the situation and equally deserves lots of commendation.

The latest updates as far as #Covid19 in Mainland China is concerned are as follows: Wuhan which is or was known as the epicentre of #Covid19 for the past week has not recorded any new case. As at last night, Sunday 22-03-2020, Mainland China reported 39 new infections and all these were imported cases, thus people coming into China from other countries. Now, total imported infections into China are 353 according to National Health Commission of China, today Monday 23-03-2020. As at yesterday Sunday, 9 new deaths were recorded all in Hubei Province making the total number of deaths in Mainland China 3, 248 people. In the past 24 hours, reported new suspected cases were 47, and a total of 459 people have been discharged from hospitals after recovering.  A total of 688,993 close contacts had been traced as at last night Sunday. Additionally, 10,701 close contacts people are currently under medical observation as at yesterday Sunday 22-03-2020. Hubei Province recorded 67, 800 confirmed cases of #Covid19 since the outbreak and recorded 3, 153 deaths. This means that, out of the total of 3,248 deaths in Mainland China, 3,153 deaths are from Hubei Province, thus representing 97.1% of the total deaths in Mainland China. It also means that, out of 81,093 total confirmed cases in Mainland China, 83.6% of these cases came from Hubei Province. These breakdowns will you appreciate the severity of the situation Wuhan and Hubei Province were in for the past two weeks but thankfully, the situation has improved drastically. At present, a total of 1, 714 patients were still in critical conditions. The total number of people who have recovered are now 72,703 representing 89.7% of the total infected people in China. By the grace of Allah, things are better now even though we are still indoors. Fantastic job done by the Chinese.

Proper coordination, monitoring, surveillance, education and sensitization of the general public, and access to information about #Covid19 and all the preventive measures helped greatly in the containment process here in China in my candid opinion. Chinese government deployed all available resources, especially material and human resources including 4000 medics from the People’s Liberation Army (Chinese Military) to confront the virus outbreak. The technology was heavily employed and deployed in the fight against the virus, for instance, an app was launched which could give you real-time information including locations of every infected person around one’s locality. While being indoors, it easy to know, from one’s surroundings, where infected persons were living or quarantined within the city and province of Hubei. China has only 3 telephone companies such as China Mobile, China Telecom and China Unicom and all these networks are constantly giving updates about the outbreak from official sources in the form of text messages.

As the world continues to battle with #Covid19, I do sincerely hope that other countries affected by #Covid19 would learn useful lessons from China especially the effective measures China adopted to contain the outbreak early. I do not know if Italy acted a bit late in locking down the areas that got affected early in their country but clearly, the situation suggests so and other nations must learn useful lessons from Italy as well.  A total population of over 1.4 billion is no joke and the situation would have been worse today but for those drastic measures key of which has been the lockdown. Keep safe and adhere to all preventive measures. The basic principle of life is SELF PRESERVATION. It is better to cede certain basic rights and privileges in times of emergency like #Covid19 in order to possibly be alive than to hold onto all your liberties and rights that could possibly expose you to infection and death. Rights and privileges are only meaningful to the living not the dead. May Allah have mercy on all of us and the entire world to defeat #Covid19. Amen. #KeepSafe. #StayHome as much as possible or avoid crowded places, use nose masks if you are out of home and adhere to all preventive measures.