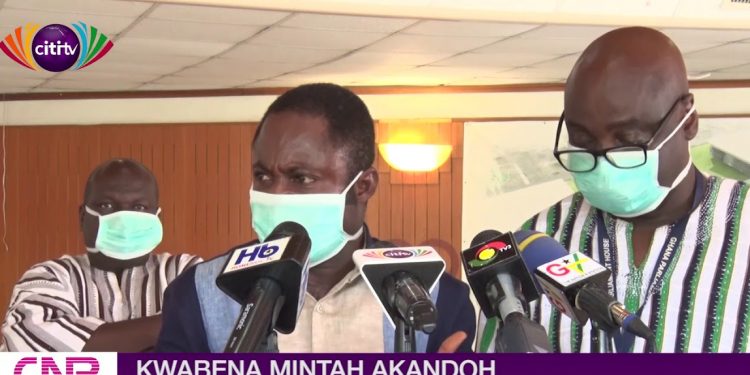 Ranking Member on Parliament’s Health Committee, Kwabena Mintah Akandoh has accused President Nana Akufo-Addo of using the COVID-19 national addresses to launch his campaign ahead of the general elections.

Akufo-Addo, in his latest address to the nation on COVID-19, promised to build 88 new hospitals in districts without such facilities across the country as well as hospitals for the six newly created regions.

This, he plans to start this year.

But Mintah Akandoh, who is also the MP for Juaboso in the Western North Region, one of the regions to benefit from the President’s promise, on Monday’s edition of Eyewitness News expressed disappointment in the President for using the novel coronavirus as a platform to make campaign promises.

“What I have realised is that His Excellency the President is hiding behind the update of COVID-19 to launch his campaign. These are campaign promises. But we know that when it comes to campaign promises, the President has a certain history. A lot of people would not trust him on campaign promises therefore if you confuse the two, i.e campaign messages and updates on COVID-19, then are not trying to bring everybody on board for the fight against COVID-19,” he insisted.

Mr. Akandoh defended his claims by saying that the promise to build new hospitals has no link to the current COVID-19 outbreak in the country.

“I say so because once you promise that you’re going to build 88 hospitals, the immediate question is that what correlation has it got with the fight against COVID-19? As the President himself stated that they are going to use one year which of course I have my own difficulty but assuming without even admitting that you’re going to use one year to construct 88 hospitals, are you going to tell me that the COVID-19 is going to linger on for one year so that when you finish constructing these facilities, they will come and contribute to the fight against COVID-19?” he questioned.

Suggestions to rather complete deserted hospitals

The President’s announcement has also generated public discussion about some hospital projects started by previous governments not being completed or abandoned while new health projects are being promised by the current government.

On the same issue, Mintah Akandoh had earlier in Parliament, asked the government to focus on completing abandoned hospital projects in the country instead of starting new ones.

According to him, such an approach is feasible compared to the promise of completing over 90 hospital projects in a year with a non-existent source of fund.

Also justifying this is the Africa Centre for Health Policy (ACeHP).

Commenting on the announcement to Citi News, the Executive Director of the Centre, Ahmed Farhan noted that, “Though we have had a backlog of uncompleted or completed but not commissioned health facilities, we still have a vacuum created by the nonexistence of some of these facilities. If we have this number of facilities coming on board, it will augment the situation.”

But in the short term, he indicated that “the issue is that once you have facilities that are uncompleted, it will be appropriate that we go back and look at those.”

However, Information Minister, Kojo Oppong Nkrumah says hospital projects started by the erstwhile Mahama administration have not been abandoned but are being worked on.

Coronavirus: Nigeria to ease Abuja and Lagos lockdowns on May 4