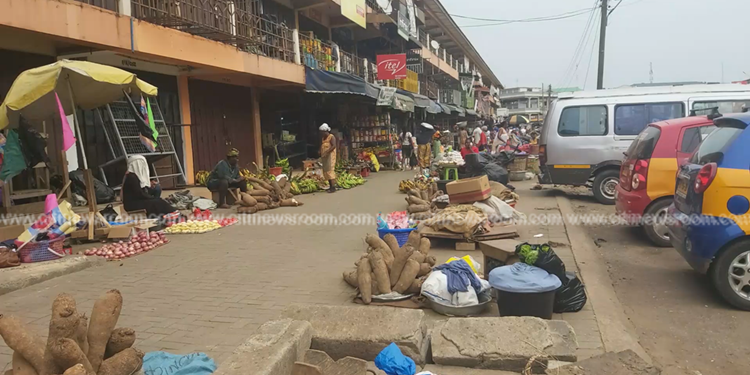 Trading activities have resumed at the Kumasi Central Market after the Kumasi Metropolitan Assembly closed it on Monday over the disregard for the social distancing protocol by traders which was put in place to help curtail the spread of the coronavirus pandemic.

As part of arrangements made before reopening the market, the Kumasi Metropolitan Assembly (KMA) and the leadership of traders agreed to operate a shift system to avoid overcrowding.

The KMA, in a statement, indicated that the traders would be grouped into three and would be given cards which will show when exactly they are supposed to go to the market.

During Citi News’ visit to the market after traders resumed work, some traders had been given cards which showed that they were allowed to operate.

Others who were not given the cards were seen engaging in their trading activities as they said they were yet to receive their cards; a situation which has still resulted in overcrowding at the market.

Some of the traders who spoke to Citi News called on authorities to ensure proper implementation of the new arrangement to ensure the social distancing protocol is properly observed at the market.

“They have given us cards that are in colours of red, yellow and green. So today, we those with the red cards are supposed to come and sell, the other colours also have days allocated to them to come and sell. Our concern is that we want it to be enforced so that we don’t have people coming on days that they are not supposed to be selling so that we can observe the social distancing because the sickness has no mark to identify those who have it,” one of the traders said.

“I have not yet gotten the card because we are many, yesterday. They asked us to come for the cards but when we came they did not show up, they have asked us to come again and that is why you see us crowded like that here. Once we have the cards, we will know when we are supposed to come and sell and when we are supposed to stay away. I only want to appeal to the authorities to speed up the process so we don’t stay here for long because we are overcrowded here and it is not helping in the fight against the disease,” one of the traders said.

Meanwhile, some traders at the area are calling on authorities to intervene as they say they have been prevented to sell at some areas although they have not been properly included in the new arrangement being made.

“They asked us not to sell because we don’t have the cards but they did not give us the cards. They distributed the cards to those selling in the markets but we are selling food and it appears we have been left out. They asked us to divide our selves into groups and sell, we did it but when we cook and come out to sell, the soldiers and the KMA taskforce come here and carry the food to the children home so we are calling on government to add us to the arrangement.”

“We sell by the roadside and we were adhering to the social distancing rule until the traders from the Dr Mensah market were sacked, they came to join us without paying attention to the social distancing rule. Our leaders went to the KMA office and they told them they will not allow us to trade again because of what happened but they will be going back they again. We sell foodstuff and some of them are perishable so we want to plead that they should allow us to sell what we have in stock now so that if they want us to stop coming, we will stop.”

The Kumasi Central Market was closed on Tuesday, April 7, 2020.

This was captured in a statement released from the Kumasi Metropolitan Assembly and signed by its Mayor, Osei Assibey Antwi.

According to the statement, “traders of the Kumasi Central Market are blatantly disregarding the World Health Organizations’s social distancing protocol in the wake of the coronavirus pandemic.”

The decision to close down the market was adopted after an emergency meeting with the Kumasi Metropolitan Security Council (METSEC) with committee members of the market and leaders of the trade associations in the market.

The Assembly further warned that “tradings along the margins of the centre of the road at the Central Market and the Central Business District are prohibited.”

“The leadership of the traders are to meet and set the modalities for the rotation of the various groups and update the Kumasi Metropolitan Security Council on same,” it added.