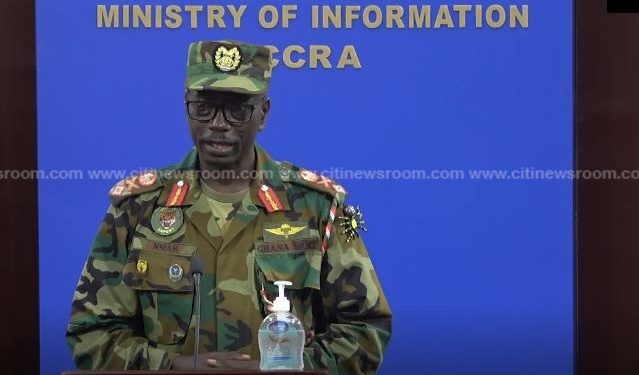 The General Officer Commanding (GOC), Southern Command of the Ghana Armed Forces, Brigadier General Abraham Yeboah Nsiah has denied claims that soldiers deployed to assist in enforcing the lockdown of Accra, Kasoa, Kumasi and Tema have been brutalizing some civilians.

According to Brigadier General Nsiah, these soldiers are professionals and have been trained not to brutalize anyone while discharging their duties.

He pointed out that since the lockdown was enforced, only one incident of a soldier brutalizing a resident had been recorded, adding that the said soldier had been recalled, following the incident.

He insisted that videos circulating on social media accusing soldiers of brutalizing civilians are old.

“I must also emphasize that some videos evolved concerning some brutalities being meted out by some soldiers to some civilians. Let me assure Ghanaians that the soldiers that we have are well trained. They are professionals. They do not brutalise.”

“We have deployed 1,000 soldiers on the field. Out of this number, we have only one incident and that incident had nothing to do with slapping. It is something that we thought it was not of our standard and we are dealing with it. That soldier involved presently has been withdrawn to the barracks so all the videos you are seeing are false. I do not know the intention behind it but whatever it is be assured that the soldiers are professionals. They do not brutalise. We do not allow it and we are never going to allow it. I go round myself and educate them.”

Soldiers on humanitarian operation but must not be provoked – Nitiwul

The Minister for Defence, Dominic Nitiwul had earlier urged civilians not to provoke soldiers assisting to enforce the lockdown.

He said civilians must not take advantage of the humanitarian assistance the soldiers are giving to the police in the operation to incite them or take videos of them.

The Minister, who toured parts of Accra on Tuesday to assess the level of compliance of the lockdown and the operations of the deployed security personnel told Citi News‘ Umaru Sanda Amadu that the alleged assault against some civilians are being investigated and appropriate sanctions will be applied to erring officers.

“It is a humanitarian exercise for the people. It is not a combat exercise, that is why you don’t see them [soldiers] use force on anybody but they try to talk to the people to make sure that they generally stay off…I want to urge the people to cooperate so as not to give the security agencies any problems,” he said.

He said the soldiers had no intention to intimidate civilians with their presence of equipment but were focused on ensuring compliance with the directive.

But there have been a number of reports with videos that show uniformed officers physically abusing some civilians allegedly for videoing them or defying the lockdown directive.