Five persons are in prison custody over the murder of the assemblyman for the Sogakope South electoral area in the Volta Region, Marcus Mawutor Adzahli.

They include Vincent Adjei, 34, whom the police believe is “the ring leader” in the murder.

The four were arrested on March 16, 2020 at their hideout at Obom, a suburb of Kasoa in the Central Region.

All suspects were put before the Dabala District Court but were remanded by the court to reappear on 26th May, 2020.

The Police in a statement on Thursday, April 23, 2020 urged the public to continue to volunteer relevant information to enable it to investigate the crime.

“The Police is by this means imploring the public to continue to volunteer accurate and timely information to assist in the investigation of this crime. The numbers to call are 191, 1855 and 0244222335,” the police said. 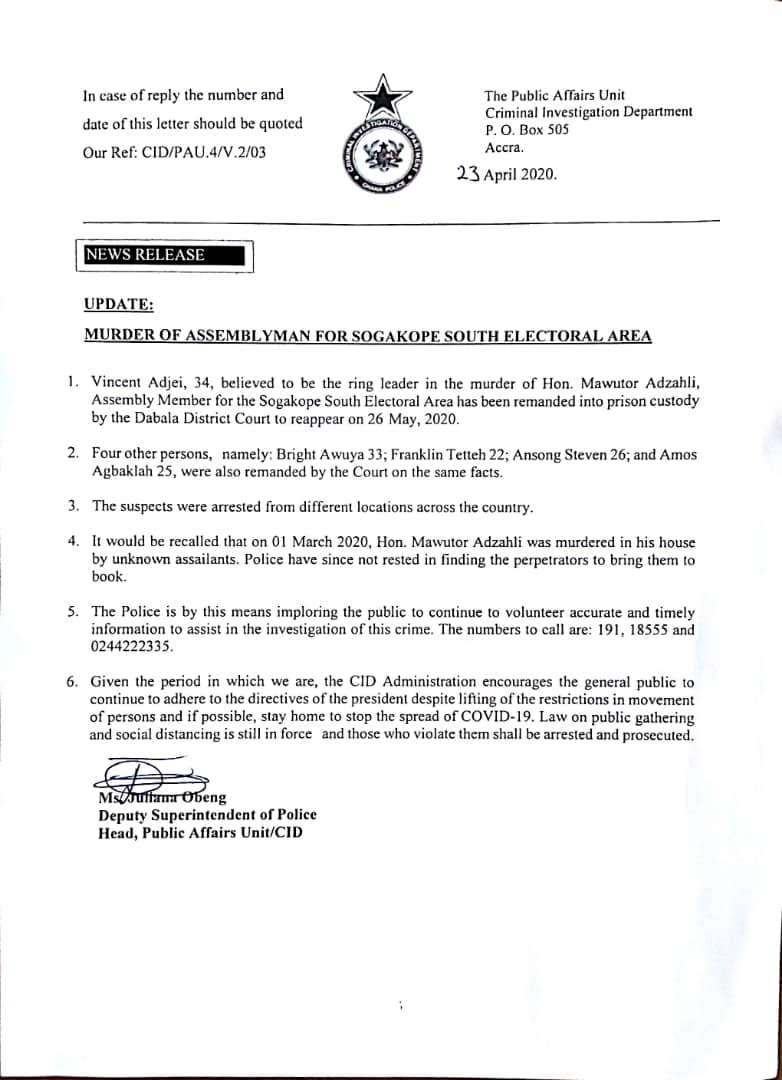 Marcus Mawutor Adzahli was allegedly murdered by unknown persons at his residence in Sogakope in the early hours of Sunday, March 1, 2020.

Whereas the family is demanding instant justice, many have also called on the security agencies in the region to step up their efforts in finding persons involved in the killing.

The incident has generated anger among members of the community who accused the police of failing to respond swiftly to distress calls by the deceased and his family when they noticed that the assailants were attempting to break into their room.

The residents, after temporarily blocking the Accra-Aflao road to protest the police’s inaction on Sunday, went on rampage last Monday, blocking the road again amidst burning of vehicle tyres.

They also pelted stones at the police station, destroying a police vehicle and other police property.

It took the intervention of joint police and military team to disperse the rampaging youth and restore calm to the area although three residents were left injured after being hit with live bullets.

Former President Jerry John Rawlings had earlier announced a GH¢25,000 bounty for the heads of persons involved in the killing of the Assemblyman.

In a Facebook post, he said, “[He] is offering an additional amount of GH¢25,000 to earlier offers towards reliable information leading to the arrest of the attackers who killed the Assemblyman for Sogakope, Marcus Adzahli last Sunday and for those who committed another violent robbery in Vume, also in the South Tongu District about a month ago.”

This followed the District Chief Executive (DCE) of the South Tongu local assembly Emmanuel Luis Agama‘s GH¢10,000 bounty announcement for the same cause.

He urged the public to offer information which will lead to the arrest of the perpetrators.