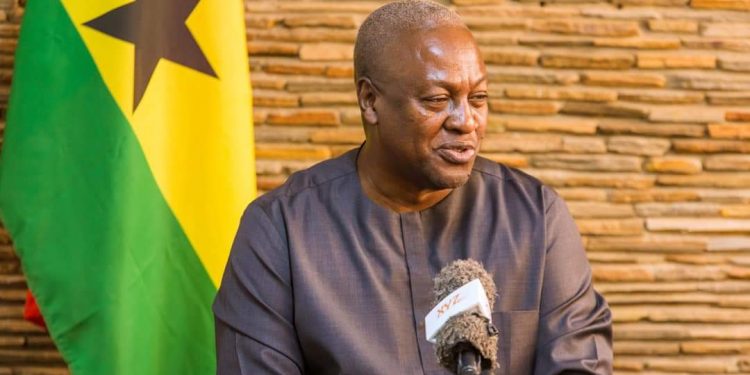 Former President, John Dramani Mahama has described the government’s humanitarian intervention of distributing food to the vulnerable during the lockdown period as an “abysmal failure”.

Following the Coronavirus outbreak in Ghana, the government banned public gatherings and imposed a partial lockdown on the Greater Accra and Greater Kumasi Metropolitan Areas in a bid to curb the spread of the virus.

Members of Parliament from Klottey Korle, Odododiodoo, Ayawaso North, Ablekuma South, Ashaiman, Obom Domeabra and Asawase, who are National Democratic Congress (NDC) members, had alleged that there was an elaborate scheme to distribute the food on a partisan basis.

The former President who made the comment on Facebook live on Thursday, April 23, 2020, dubbed “John Mahama in a Digital Conversation”, mentioned that the distribution of food was chaotic, disorderly and in some cases partisan.

Mr. Mahama said, “it is important to note that the government’s humanitarian intervention to alleviate the unintended but predictable consequences of the lockdown was an abysmal failure.”

He also expressed worry that all protocols of social distancing aimed at preventing the spread of the virus were flouted due to lack of proper planning.

“Definitely no careful planning went into the implementation of this initiative as is characteristic of this administration. My suggestion to involve Assembly members, traditional rulers, religious leaders, and CSO’s were ignored. Many Ghanaians were faced with two choices. Either to stay at home and die of hunger, or come out and take their chance against the deadly virus. Faced with this choice, they opted for the latter,” the former president remarked.

The Member of Parliament for Klottey Korley, Dr. Zanetor Agyeman-Rawlings had earlier called on President Nana Akufo-Addo to institute a credible investigation into the alleged partisan distribution of food in some areas observing the lockdown including the Klottey-Korle constituency.

“I call on the President, H.E. Nana Addo Dankwa Akufo-Addo to institute credible investigations into the seeming politicization of food distribution in this time of crisis. My constituents and I stand ready to cooperate and to present unimpeachable evidence before such an investigative panel,” she said.