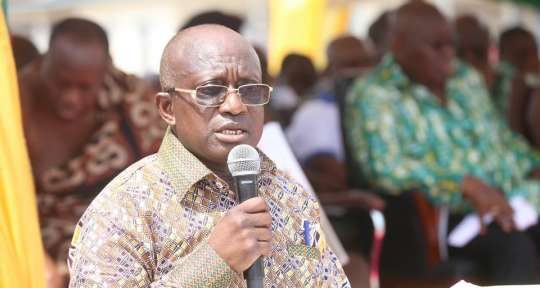 Some incidents of abuse have been recorded in the region with the latest incident being an alleged attack of a journalist with Kumasi based Zuria Radio.

Addressing journalists after a Regional Security Council meeting with the Defence and Interior Committee of Parliament, Simon Osei Mensah noted that residents are largely complying with the lockdown directive.

“Whoever is found culpable will not be shielded. Sometimes the security agencies deal strongly with their people than we think. The person who assaulted the DCE, for instance, has been taken off the schedule. Nobody will be shielded,” Mr. Mensah said.

Information Minister Kojo Oppong Nkrumah recently indicated that a soldier who was alleged to have shot and killed a resident of Ashaiman over the weekend had been withdrawn from his duty post.

“The officer involved has been withdrawn from the operations, taken in, disarmed and investigations have commenced from the Military Police,” the Minister said.

A resident of Ashaiman was shot and killed when he allegedly tried to disarm a soldier who was conducting an arrest as part of the COVID-19 restrictions on movement.

The development has sparked anger among the community folks with the Member of Parliament for the area, Ernest Norgbey, calling for the immediate withdrawal of the officers involved.

The MP accused President Nana Akufo-Addo of being silent on that incident during his national broadcast, giving an update on COVID-19 in Ghana.

“We in Ashaiman are disappointed in President Akufo-Addo who is Commander-in-Chief of the Ghana Armed Forces for his unacceptable silence on this major development when he addressed the nation on Sunday night, particularly as he sought to downplay the many incidents of human right violations and unwarranted excesses by security personnel enforcing his lockdown directives. A situation which the Commission on Human Rights and Administrative Justice had had cause to publicly condemn,” Ernest Norgbey said.

But Kojo Oppong Nkrumah said President Akufo-Addo is committed to ensuring that civilians are not abused by security officers during the lockdown.