Nigerian woman put up for sale in Lebanon rescued 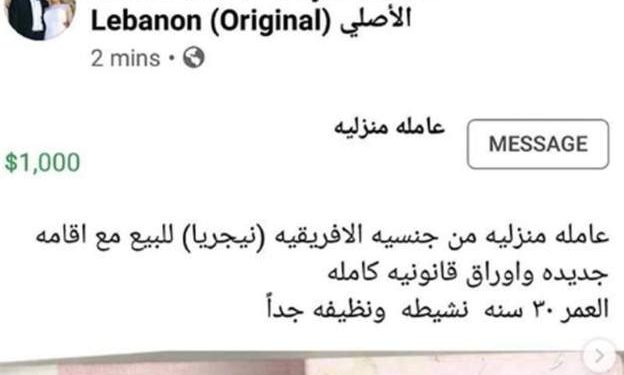 A Nigerian woman put up for sale on Facebook in Lebanon has been rescued – days after a man suspected of involvement in the advert was arrested.

The advert caused an outcry in Nigeria.

Chairperson of the Commission for Nigerians in the Diaspora, Abike Dabiri-Erewa told the BBC that the 30-year-old woman is now safe at the Nigerian embassy in Beirut after she was rescued by the Lebanese authorities.

Mrs Dabiri-Erewa did not give details of how the woman was rescued but said the lockdown imposed by the Lebanese authorities to fight the coronavirus pandemic helped in tracing her.

A man was arrested last week for allegedly putting the Nigerian domestic worker for sale for $1,000 on Facebook.

A screen grab of the advert was shared online:

A passport photo of the woman was included in the advert which caused widespread social media condemnation.

The UN says thousands of women and girls from Nigeria and other African countries are being trafficked every year – often lured with false job promises in Europe and Asia – but usually end up being exploited as domestic maids or forced into prostitution.

Uganda president blasts MPs for allocating $2.6m to themselves for coronavirus sensitisation