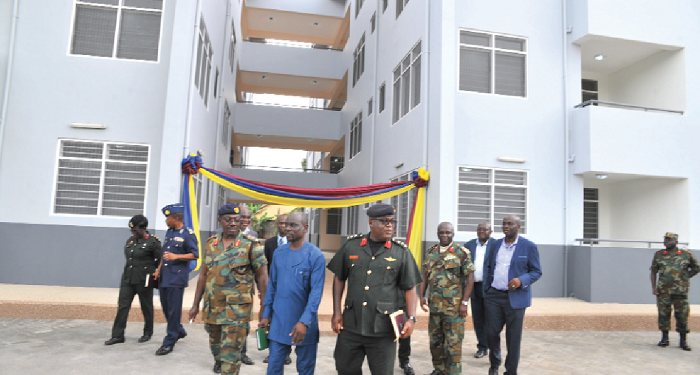 The government says it will prioritize the accommodation of staff of the Ghana Armed Forces as part of the overall welfare package for them.

According to the government, several infrastructural projects are at various stages of completion to ease the accommodation challenges of personnel.

Deputy Minister for Defence, Major Derrick Oduro (Rtd) said conscious efforts have been made by the government to reduce the number of personnel who commute to the barracks daily for official duties.

He was speaking at a groundbreaking ceremony for the construction of a Transit Quarters for Other Ranks by the Southern Command of the Ghana Armed Forces.

The construction of the barracks commenced in 2017, as part of the Barracks Regeneration Project.

It will be recalled that upon his assumption of office, and in the Asempa Budget, President Akufo-Addo announced the institution of the ‘Barracks Regeneration Project’, to address the accommodation challenges of the Armed Forces, and, thereby, ease the discomfort that troops and their families were facing.

Commissioning the New Douala Barracks, the President noted that “over the last three years, we have worked diligently to improve the state of operational readiness of the Armed Forces, by retooling all the Services to enable you to perform your roles more efficiently and effectively.”

One plank of this welfare-enhancement package, he said, is the Barracks Regeneration Project, which has resulted in the completion of the ‘New Douala Barracks’.

The President urged the Military High Command to ensure that these accommodation units are well maintained, and appealed further to the new occupants to make sure that these facilities stand the test of time.