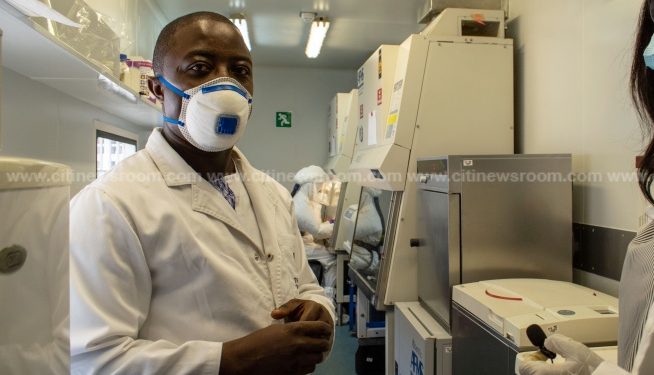 Dr. Theophilus Odoom, the head of labs at the Accra Veterinary Services Directorate

There is a kick in the step of Dr. Theophilus Odoom, the head of labs at the Accra Veterinary Services Directorate. His outfit is getting some recognition because of its role in bolstering Ghana’s testing capacity.

The Veterinary Services Directorate has three Biosafety level 3 labs which are offering some streams to the ocean that is Ghana’s testing capacity. Globally, veterinary labs have been stepping up as we all look forward to that bell-shaped curve in the tracking of infections.

This pandemic will not last forever. That bell-shaped curve that signals something close to normalcy is on the horizon. But for a lot scientists and health researchers in Ghana, normalcy is something they hope is left in the past. Normal for them is apathy, disregard and relegation of science to the relative shadows of society.

There are some signs that we may forget about the importance of scientists and their research despite all the lessons we swear we will learn from this pandemic. Consider the pledge by the President to build close to 100 hospitals nationwide as a response to heightened concern about our ailing health sector. What has followed has been sickening partisanship and with the debate over infrastructure, we are forgetting that prevention is better than cure.

For Dr. Odoom, the One Health concept is critical to whatever prevention measures, if any, Ghana puts in place in the wake of the pandemic that has brought the world to its knees.

“This pandemic is showing us that One Health is the most important in solving pandemic situations… this is the key,” he says.

The One Health concept is an approach to designing and implementing programmes and policies in which multiple sectors on the human and animal healthcare front communicate and work together to achieve better public health outcomes.

Ghana’s One Health policy is yet to take off formally. There is a reactive version of the policy currently coordinated by the National Disaster Management Organisation.

The areas of work in which a One Health approach is particularly relevant to include food safety and the control of diseases that can spread between animals and humans (zoonoses), such as the flu virus we currently live in fear of.

“There is no disease that pertains to only one species. When it affects humans, it affects the environment and it affects animals. From animals, it can also jump to humans,” Dr. Odoom notes.

Many of the same microbes infect animals and humans, as they share the eco-systems they live in. It has always been clear that efforts by just one sector cannot prevent epidemics from wreaking havoc. Consider a disease like rabies in humans which can only be prevented by getting a grip on the animal source of the virus.

It is people like Dr. Odoom and his peers in the veterinary field that are trying their best to remain vigilant in the areas where public health and animal health intersect.

In this intersection, there should be effective information sharing across the local, national, regional and global levels that should implement joint responses to health threats.

The World Health Organisation (WHO), for example, works closely with the Food and Agriculture Organisation of the United Nations (FAO) and the World Organisation for Animal Health (OIE) to promote multi-sectoral responses to food safety hazards, risks from zoonoses, and other public health threats at the human-animal-ecosystem interface and provide guidance on how to reduce these risks.

But these efforts will only take them as far as their research and, by extension, funding. That is the pillar Ghana, and Africa as a whole, is yet to adequately craft.

All this is despite African Union (AU) member countries, back in 2006, committing to spend at least 1 percent of their GDP on furthering research and development by 2010.

“We don’t get money for research because they see us just as a service provider,” Dr. Odoom laments.

In his utopia, he would be working in a Ghana-funded veterinary research institute with a research wing and a diagnostics component.

But in reality, most of the veterinary services research support comes from external sources. Indeed, the directorate would not be in a position to help with the coronavirus pandemic were it not for help from Global Affairs Canada back in 2014, who set up the lab.

As Dr. Fenteng Danso, the National Head of Epidemiology, makes a list of people his outfit is indebted to, he cites the government of Canada, the FAO and the International Atomic Energy Agency. The government of Ghana is conspicuously, but unsurprisingly, absent.

“Of course the government has stepped in,” he, however, adds in a bid to spare the State’s blushes. Some money has been released to the Ministry of Agriculture which they expect to trickle down to them.

As much as the promised infrastructure in the health sector will be of some importance; if (and a big if) they are completed in time, the government has not made any tangible commitment to research.

Those in the cynic’s boat will say the government cannot cite increased research as an achievement on the campaign trail in a society with dire inequality and alarming poverty.

But if the coronavirus has taught us anything, it is that the time to start ingesting the numerous bitter pills we need for our balanced development is now.

It is why the organisations like the African Academy of Sciences view this at the time to push for African countries to work towards crystalising the research funding goal made over 15 years ago by AU nations.

Meanwhile, there hasn’t been any tangible commitment from the State towards enhancing laboratory infrastructure across the board, which should be the open-goal promise in the midst of them being part of the vanguard during this pandemic.

Dr. Bashiru Kikimoto, a man whose name has come up in the past to calm nerves when there are reports of avian influenza and like, currently heads the National Food Safety Laboratory.

Listening to him, you get the sense he feels this will be the last chance in his lifetime the veterinary laboratories, among others, could get the support they have needed over the years.

“What I think is a turning point [from the coronavirus pandemic] is that it has helped Ghana to understand that our laboratory testing capacities are not all that apt,” he told Citi News.

But understanding alone is not enough. The increased attention and minor retooling “should not be a temporary measure” he warns.

At the end of the day, and after decades on the frontline of public health, albeit from the animal side of the coin, all roads lead to committing to the One Health Concept in Dr. Kikimoto’s view.

“Veterinary services; whether we like it or not are also part of One Health globally. We now have to concentrate and call on the State to support the veterinary laboratories.”

Whatever happens with this coronavirus pandemic, a wave of pestilence we hope ends sooner rather than later, Dr. Odoom is resolute in the fact “Ghana needs to embrace the One Health concept.”

“When you go individually, we lose. We need to fight [pandemics] as a One Health issue.”