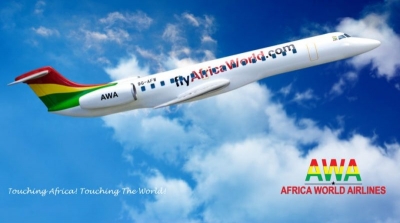 Speak to Richard Kyereh, Head of Commercial Operations of Africa World Airlines or Samuel Takyi, Marketing and Sales Manager of Passion Air and I am sure they will tell you one of their greatest challenges is keeping their aircraft fleet operational always. Yes, a difficult task it is, and by so anyone that likens the management of an aircraft fleet to that of a car will be comparing oranges to apples; two unbalanced equations, as you will learn soon.

It is always business as usual until a wind of change blows displacing all it can find. The case of COVID-19 in Ghana! With what was thought of as a China-problem in 2019, now became a world problem; the novel coronavirus was swept across the globe quickly causing rapid interventions to control the spread with the famous closure of borders, hence a halt in some aspect of human migration across borders.

With the closure of Ghana’s borders and that of other countries in March 2020 and a subsequent lockdown of Greater Accra, Tema, Kasoa and Greater Kumasi meant a standstill on operations for the home-based airlines both on domestic and regional routes.

Altogether, not less than ten aircraft were grounded. Africa World Airlines which had launched operations into the Abidjan market on February 14, 2020, had to review its financial and growth projections. For Passion Air which is now trying to cement its position in the aviation industry after almost two years of its inception with few issues here and there, the closure meant a big blow.

Certainly, the strength of these home-based airlines is unmatched to that of other airlines. Take, for example, Ethiopian Airlines and Emirates, the pandemic has seen a shift from commercial to cargo operations and through the recalibration of some passenger planes to freighter jets to generate revenue rather grounding the planes.

Now, one may ask why our home-based airlines could not follow suit, but the problem is Africa World Airlines operates a fleet of Embraer 145 with its competitor, Passion Air also operating a fleet of Bombardier Dash 8 Q-400 and the question now becomes, assuming the aircraft could be recalibrated, how many tons of cargo can be carried aboard to break even for flight operations?

Fast forward into the lifting of the movement restrictions, domestic air operations have begun with social distancing protocols observed aboard. Thus, all aisle seats are now left unoccupied. So a 70-seater plane with a 2-2 cabin configuration now has a single occupancy on each side of the cabin. This means each row now sits two people instead of four without an increase in air tickets except in some cases where pricing begins from a particular sales category, say gold or bronze purchases. For example, if a regular trip cost from Accra to Kumasi cost GH₵370 and a silver or gold price cost GH₵390 and GH₵400 respectively, the airlines adjust the sale of tickets from the regular to one of the relatively higher categories.

The zeal amongst the airlines to return to normal in the skies cannot be underestimated. In spite of the recent developments, the airlines still fly even with the decrease in daily passenger numbers.

In aviation, the cost of doing business for airlines is expensive whether or not planes fly. For basics, one may argue that without flying, airlines get to save fuel and the aircraft from stress. Truth is, in air transport business, aircraft are actually built to fly all the time with regular maintenance for excellent quality and safety performances for a particular period. Not flying means maintenance of hydraulic brake system, protection of engines, airport parking fees (where applicable), physical protection of the aircraft’s exterior and cabin from environmental elements like sunshine, dust and water.

In a country where only a few players have been able to survive at the domestic front over the years (one can talk of the departure of Starbow, Aero and Antrak), I will not hesitate to join the voices calling for support for our Ghanaian airlines.

With Ghana’s ambition to make Kotoka International Airport (KIA) an aviation hub in West Africa, the contributions of the local airlines cannot be overlooked. Africa World Airlines, for instance, move a large number of passengers between Accra, Lagos, Abuja, Freetown, Monrovia and Abidjan. The building of this hub cannot be fully realized without such a player.

Surviving as a local airline has not been a walk in the park in Ghana. Although the airport authority has made a decision recently to waive aeronautical and rent charges for three months, there is a need for the Aviation Ministry to develop a comprehensive plan to keep the airlines afloat now and post COVID-19.

We should not allow another setback of having our two key players collapse. Running air transport looks beautiful and lucrative from the outside but when you ever get the opportunity to view their financial records, that perception about them may change.

The author is Mark Ofosu an Aviation Enthusiast. [email protected]