Coronavirus: Over 40 cases traced to church service in Germany 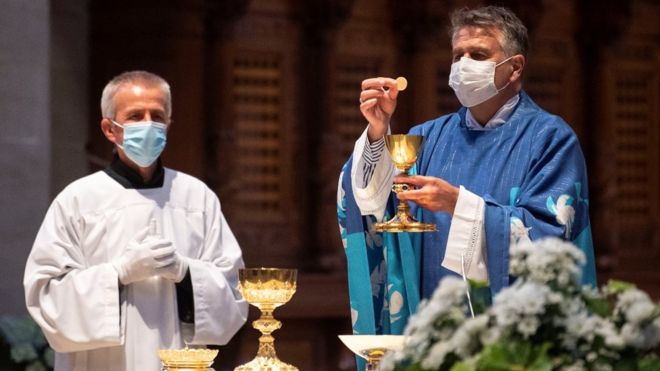 More than 40 churchgoers who attended service after the lockdown was eased in Germany earlier this month have contracted coronavirus, officials say.

The service was held on 10 May at a Baptist church in Frankfurt.

Church officials say they followed social distancing rules and disinfected the building ahead of the service.

Each of Germany’s 16 states determines its own lockdown exit plans. Hesse, where Frankfurt located, relaxed restrictions on worship on 1 May.

Those attending services have to be kept 1.5m (5ft) apart and provided with hand sanitiser.

Wladimir Pritzkau, the deputy head of Frankfurt’s Evangelical Christian Baptist congregation, told German media that the rules were adhered to during the 20 May service.

Six of those infected were taken to the hospital.

At least 16 of the people infected lived in Hanau, east of Frankfurt. As a result, the town has called off a prayer gathering that Muslim leaders had organised for this Sunday.

Germany has recorded relatively low numbers of Covid-19 cases and deaths – 177,850 and 8,216 respectively, according to the Robert Koch Institute, a federal health body.

This has allowed the country to ease restrictions over the past two weeks.

Shops are now reopening, pupils are returning to class and the Bundesliga has become the first major football league in Europe to resume after the pandemic.

We don’t have challenges, May salaries will be paid on time – CAGD assures