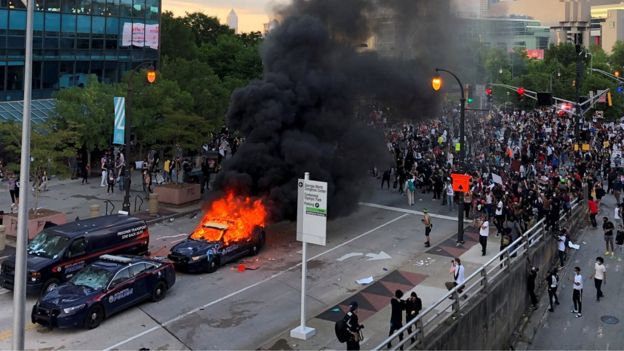 Curfews have been ordered in cities across the US to try to stem unrest sparked by the death of a black man in police custody.

President Donald Trump urged “healing” over the death of George Floyd but said he could not allow mobs to dominate.

An ex-policeman has been charged with murdering Mr Floyd, 46, in Minneapolis.

Derek Chauvin, 44 and white, is due to appear in court on Monday.

In a video footage, Mr Chauvin can be seen kneeling on Mr Floyd’s neck for several minutes on Monday. Mr Floyd repeatedly says that he is unable to breathe.

Three other officers present at the time have also since been sacked.

The Floyd case has reignited US anger over police killings of black Americans. It follows the high-profile cases of Michael Brown in Ferguson, Eric Garner in New York and others that have driven the Black Lives Matter movement.

But for many it also reflects years of frustration over socioeconomic inequality and segregation, not least in Minneapolis itself.