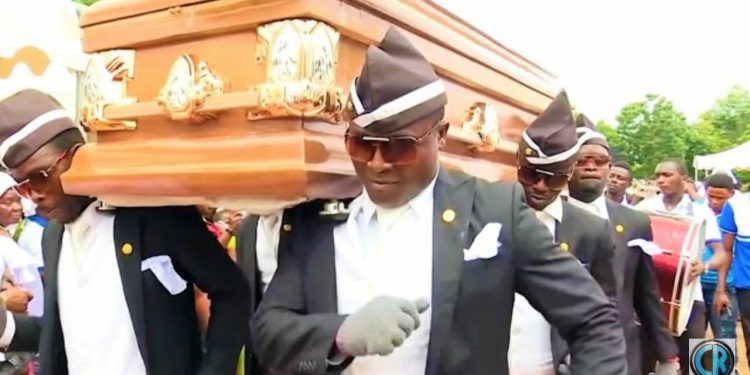 It is undoubtedly clear that the COVID-19 pandemic has made us accustomed to different ways of living even though it has brought lots of glitches to our daily lives.

Such glitches include the ban on public funerals, ban on school conferences, workshops, funerals, festivals, political rallies, church activities, and other related events. The ban declared by President Akufo-Addo in a televised broadcast was part of measures to contain the spread of coronavirus in the country.

Nonetheless, the President in that broadcast gave a caveat that private burials were permitted however mourners present must not exceed 25.

“Private burials are permitted, but with limited numbers, not exceeding twenty-five (25) in attendance,” President Akuffo-Addo said.

This directive to me should be enforced even after the ban is raised to cut down cost during funerals.

Funeral celebrations in Ghana generally have often been criticized by pastors and politicians as well as in newspapers and articles due to the high expenditure on them. The dimension which contemporary Ghanaian funerals have assumed over the last decade gives a great cause for concern if not worry.

Frankly speaking, the advent of COVID-19 has enlightened us that, we can do away with most of our funeral practices so we don’t incur so much cost. Whilst in other parts of the world, people are busily working hard sometimes 7 days a week, Most Ghanaians spend time celebrating one week of the departed soul, final funeral rites, forty-day celebration of the dead, and one year celebration.

A chunk of Ghanaians will argue that it’s all part of their culture, but this pandemic has revealed that some aspects of our culture or funeral practices can be put on hold without facing any dire consequences. COVID-19 has taught us that, there is no need for a one-week celebration; a phenomenon that is gaining so much ground in funeral preparations these days, there is no need keeping a deceased in the mortuary for a long period and there is no need for preparing food for the masses during funerals which leaves heavy debts on families.

In the past, funerals were organized in a much simpler way to cut down cost; however, the case is no longer the same today. In some communities in Ghana, if the family members do not bury their dead in an “honourable” way, the person or family is ridiculed by the larger society. They will be tagged as worthless and are mocked by the public. It wasn’t real to me that my fellow Ghanaians could adapt to this directive by the President until I decided to involve myself in a relative’s funeral earlier last month from start to finish. And guess what, the departed was buried a week after he kicked the bucket. No extravagant cost incurred. All the family needed to pay was the mortuary fee, the coffin, dress for the deceased, and the boneyard fee. As a developing country that has some developmental challenges to surmount, it would seem to be a misplacement of priorities to commit so much time and money on the dead.

It is a belief that befitting funeral rites for beloved have its place in society, but without necessarily having to be extravagant.

Nonetheless, the little search conducted before writing this piece confirms that for a modest funeral today, the cost will probably range between GH¢ 40,000 and GH¢ 50,000. And with the ban on public funerals families are saving more money than they would have. In a debate on the floor of Parliament on the 29th of November 2005 as reported by Ghanaweb.com, the Former Minority Leader, Alban Bagbin said ‘we are investing in the dead rather than the living through expensive funerals and that is bad’. He added that “the dead should be given decent and not expensive burials knowing very well that whatever was done to the dead it was destined for the grave”.

This is prudent, because most times, after spending on expensive cloth, coffins, and keeping the corpse in expensive morgues, the widow and children are left with nothing and are expected to fend for themselves.

So why are we having to spend so much money on funerals?

As noted by, John Kwame Adu Jack, Emmanuel K. S. Amoah and Eric Hope in a research work titled: Estimating the Financial Costs of Funeral Celebrations in Ghana: A Case Study of Greater Accra, Central and Ashanti Regions, they concluded that, due to the social, cultural, ritual and economic nature of deaths and funeral rites, there should be a concerted effort by the Legislature, the Clergy, Local Government Authorities, and the Traditional Authorities to formulate and enforce a law to reduce the number of times funerals are celebrated, multiple funeral cloths and the maximum period for keeping corpse at the morgue. These I believe when done will not only cut down cost but will also decongest our mortuaries.

In a story published by myjoyonline.com on the 15th of April 2020, Deputy Administrator at the Pantang Hospital, Collins Kessie said the refusal of families to hold small and private burials for their dead relatives have left the morgues congested.
“There has been little activity in terms of people coming for their bodies. Of course, as for death, people continue to die so the number of bodies coming in has not changed. So what has happened now is that the morgue is currently full”.

So, assuming there are laws on how funerals are organized in the country will administrators at the morgues complain about space? Again, family heads and members must be decorous and moderate on expenditures of caskets with its decorations, announcements which are duplicated on FM stations, Television stations and newspapers, billboards of deceased, giving out of souvenirs with the picture of the deceased and the use of many musical groups at one funeral. Buffets (food) and refreshments that are organized for sympathizers are very costly and so must be reduced especially the buffet.

Though it is good to see the person off well, arrangements can be done simply despite the family’s good economic stand. If we can abide by private burials during COVID-19, why can’t we do the same after COVID-19?

To draw the curtains, as campaigns have started by Quaker Social Action an independent UK charity in some countries including the USA in fighting against costly spending on funerals, respected institutions, and persons including traditional authorities must also follow suit.